AppleInsider
Posted: October 29, 2021 12:25AM
in General Discussion edited October 2021
An image of a smartwatch expected to be marketed by Meta, formerly known as Facebook, shows a device with design cues resembling Apple's market-leading Apple Watch. 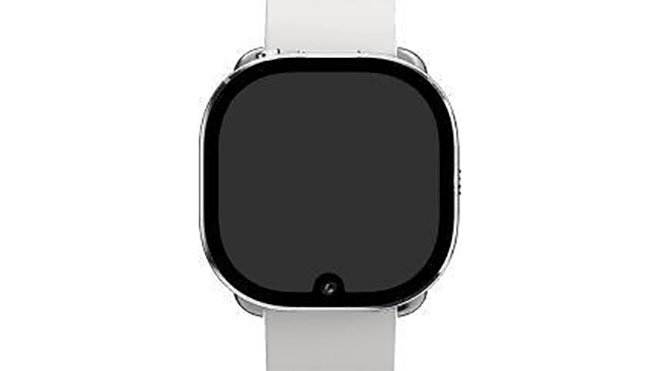 A photo of the as-yet-unnamed watch device was discovered in Facebook's View iOS app, software that controls a smart glasses product that the company debuted in partnership with Ray-Ban in September. Developer Steve Moser uncovered the image and shared it with Bloomberg on Thursday.

The overall design appears to borrow elements from Apple Watch, including a roughly square shape with rounded corners recessed lugs. Control buttons are located on the right and top sides of the case, while a front-facing camera resides in a notch at the bottom of the watch face.

The Verge previously reported details about Facebook's smartwatch design, saying that the device could feature two cameras and a detachable display. A first camera, likely pictured in the image above, will serve video calling duties, while a second, higher-resolution shooter on the display's rear can be used to capture video when removed from a stainless steel frame. Pictures, video and other content will likely be uploaded directly to Meta services.

The smartwatch is predicted to feature LTE connectivity and health-tracking features, with later iterations rumored to serve as a user interface for a pair of upcoming augmented reality glasses. Meta CEO Mark Zuckerberg hinted at the possibility of wrist-based control in a product demo today that introduced the company's vision of the metaverse.

Citing sources familiar with the company's plans, Bloomberg reports that Meta is developing three generations of the smartwatch, with the first potentially ready to ship in 2022. Whether the device in today's images represents a final product design is unknown.