AppleInsider
Posted: February 9, 2022 7:07PM
in iPhone edited February 25
Samsung's shot at the iPhone 13 -- the Samsung Galaxy S22 -- is shipping to consumers, with worthwhile updates and features that iPhone users might like to have. Here's how they stack up. 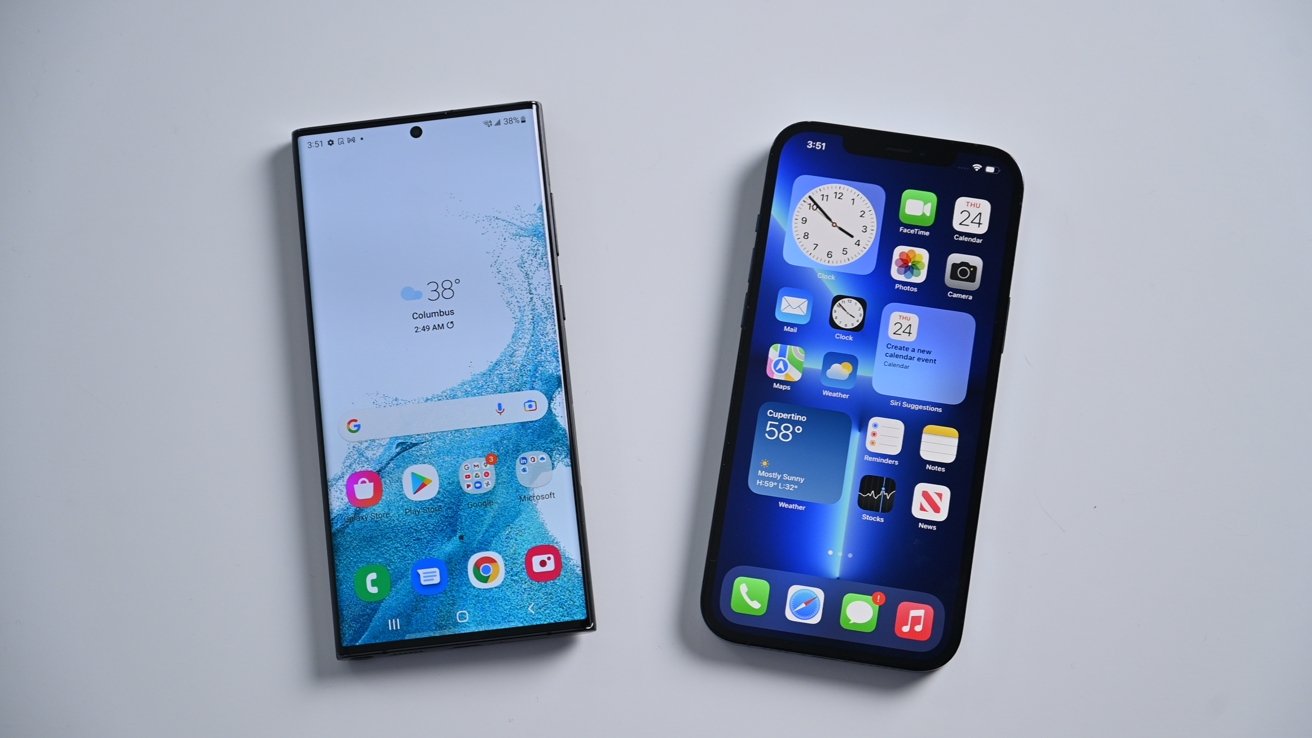 Samsung has announced its new range of phones, the Samsung S22, S22 Plus, and S22 Ultra. Although not even close to identical, they are broadly aimed at the same kinds of users as Apple's iPhone 13, iPhone 13 Pro, and iPhone 13 Pro Max.

They're presumably also aimed at the same market that last year's S21 range was. However, when compared to the S21, the new S22 range has small shortcomings. The screen on the S22 is 0.1 inches smaller than on the S21, for instance, while the battery capacity is also less at 3,700mah instead of last year's 4,000mah.

Yet it's where the S22 compares to Apple's lineup that it gets interesting. 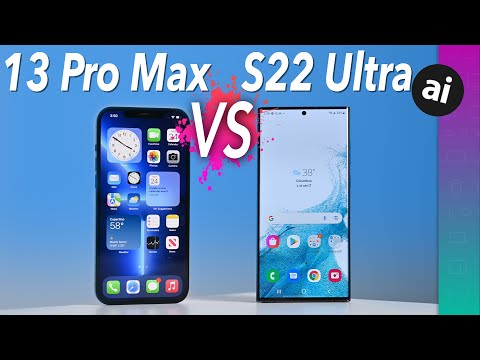 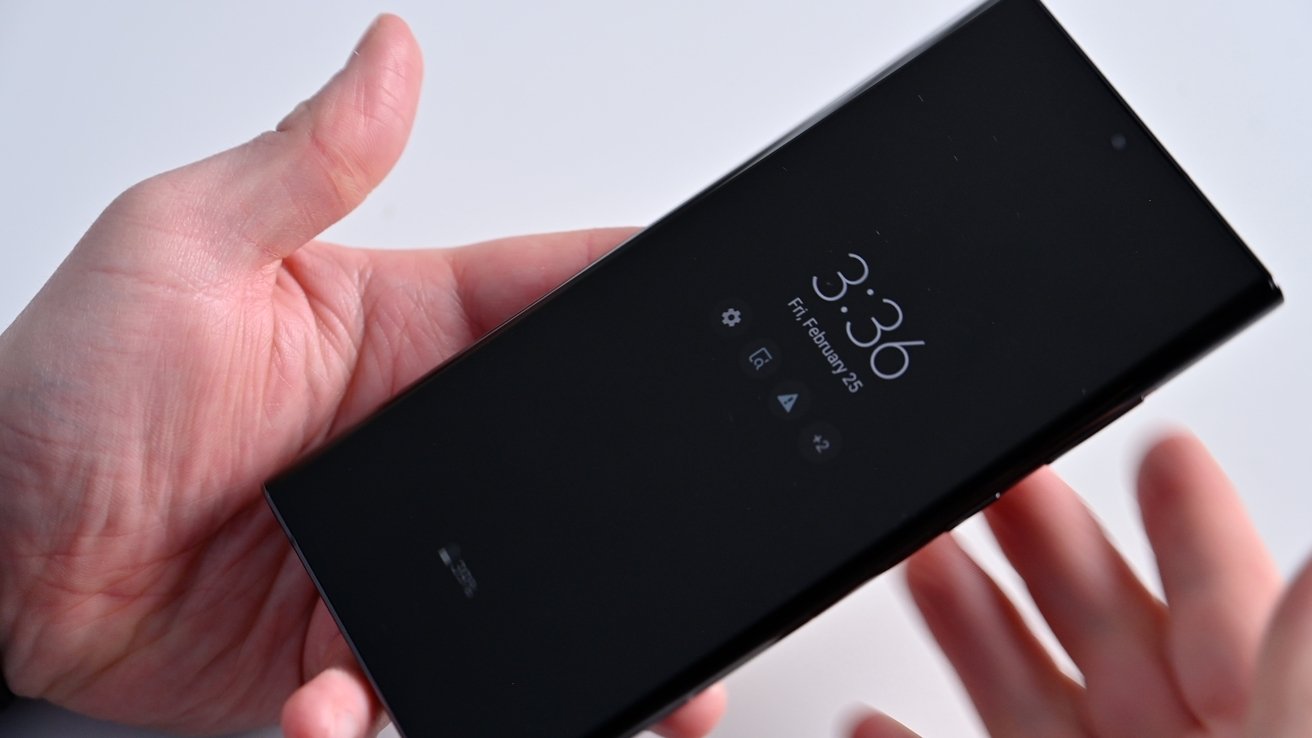 Always-on display of the S22 Ultra

The three phones are all slightly lighter than their iPhone equivalents, most notably with the iPhone 13 being 6g heavier than the S22. 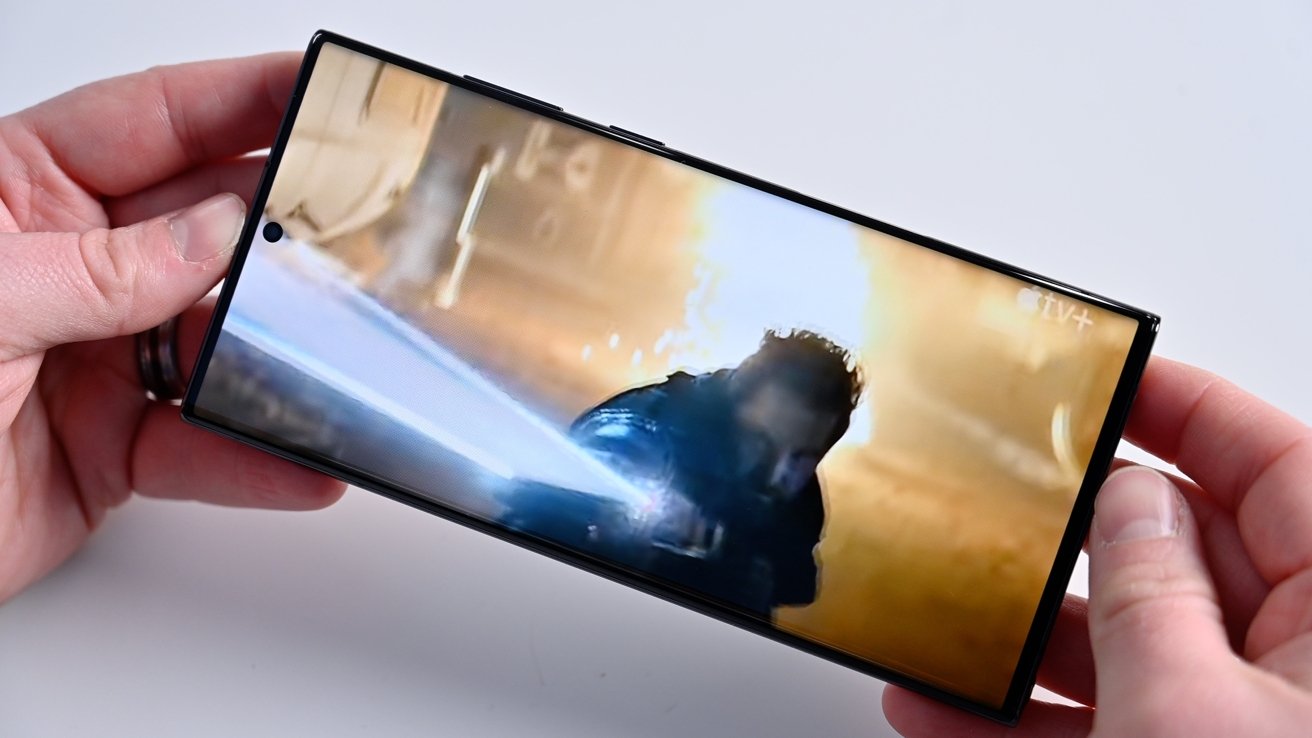 The Ultra has a max brightness of 1750 nits -- beyond the iPhone's 1200 nits -- though this only applies while watching HDR content. In typical use day-to-day, both phones are on par with one another.

Samsung's S22 comes in two flavors. Users located in North America, South America, India, and Africa will get a Snapdragon chip while primarily European users will receive Exynos chips with AMD GPUs. Being located in the US, our S22 Ultra came with the Snapdragon chip.

Samsung includes the same chip -- in this case the Snapdragon 8 Gen 1 -- in all of its S22 models. The Snapdragon is a 4-nanometer chip, with a total of eight cores, starting with one Cortex X2 as the high-performance chip capable of up to 3GHz.

Of the remaining seven, three are the Cortex A710, capable of going up to 2.5GHz, along with four Cortex A510 as more energy-saving cores with a maximum 1.8Ghz clock speed.

Onboard with the Snapdragon chipset is the Adreno 730 GPU, a new generation of Qualcomm's graphics element.

Machine learning is handled by Qualcomm's updated Hexagon DSP, while the Spectra image signal processor offers 18-bit RAW image output at up to 3.2 gigapixels per second.

This all sounds like a leap forward for Qualcomm, but initial benchmarks released on February 11 indicate it's not enough to unseat Apple's A15 Bionic. 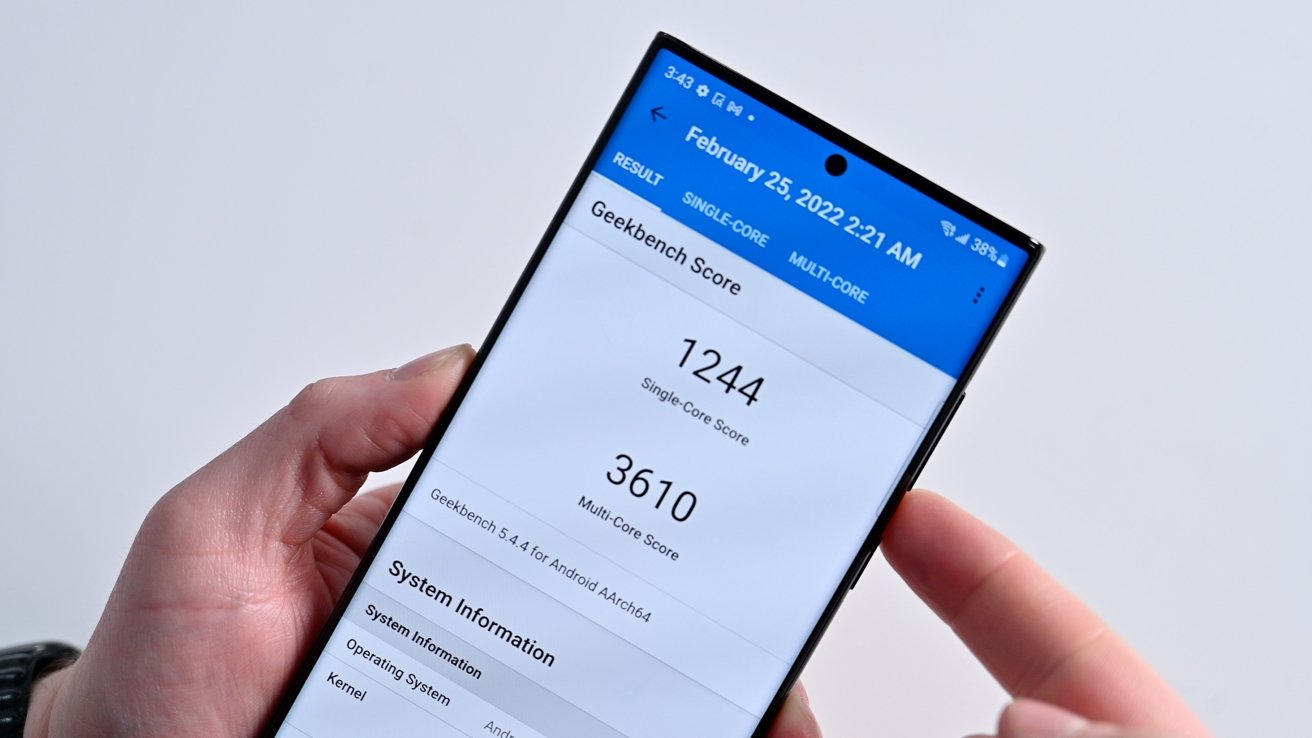 Our Geekbench results on the S22 Ultra

In our own Geekbench benchmarks, the S22 Ultra pulled 1244 for the single-core and a 3610 for the multi-core. Our iPhone 13 Pro Max dominated with 1726 and 4712 single and multi-core respectively.

A Basemark Web score of 552 for the S22 Ultra was also deemed to be low compared to the 1,139 scored by the same iPhone.

Under GFXBench 5, the battle was closer, with the S22 Ultra running at FHD resolution managing 60fps for the Aztec Ruins Onscreen Score against 54 for the iPhone. The Offscreen Score counterpart went more in the iPhone's favor at 36fps to 35fps.

The Galaxy S22 Ultra does see its score go down considerably when switching to WQHD, with Onscreen and Offscreen results of 28fps and 29fps respectively.

With the iPhone leading in most of the tests, the minor win on one particular benchmark just isn't enough for the Galaxy S22 Ultra to level the playing field.

Actual battery life won't be measurable until the new phones are shipping, but based on specifications alone, the Samsung models appear to have the edge. 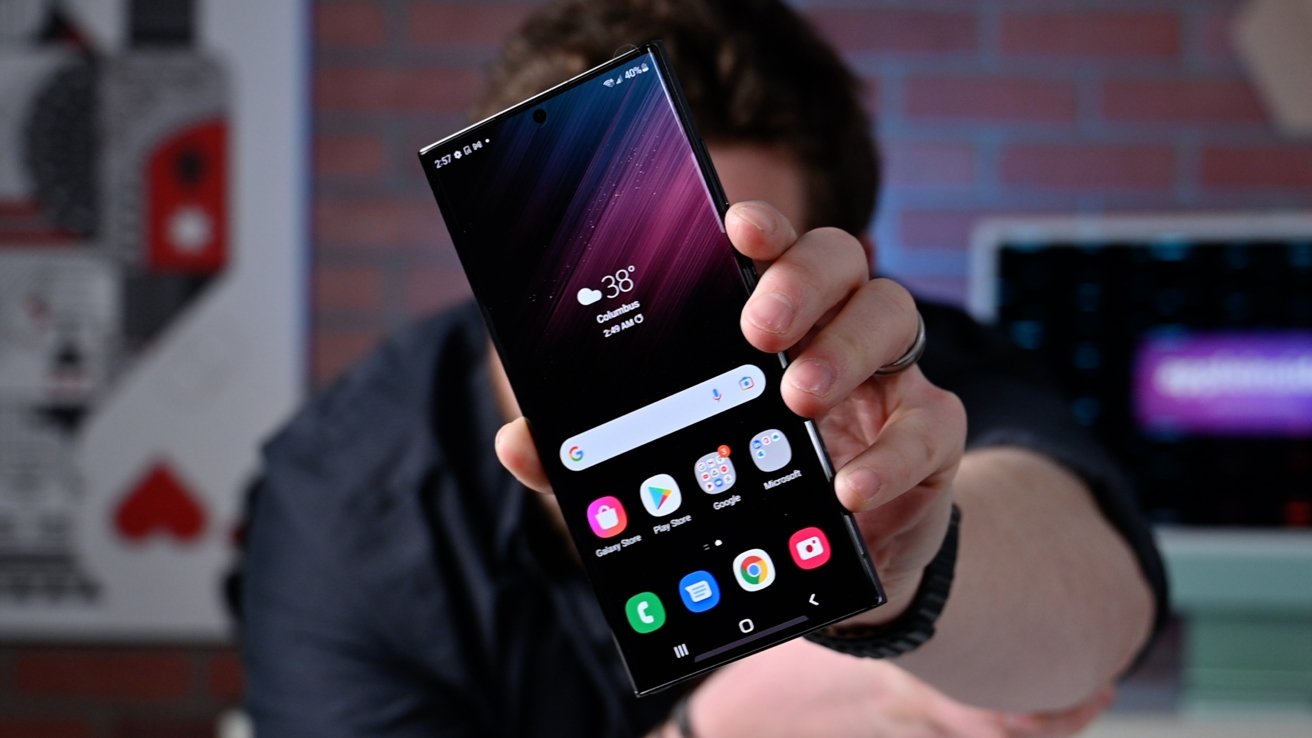 It's likely, then, that the Samsung phones will have longer battery life than the iPhone 13 range, but it isn't certain. Apple's A-series processors have traditionally performed better than Snapdragon ones, including being better at power conservation.

The cameras make the difference

Samsung and Apple have different approaches to processor design, to the amount of RAM utilized, and even just different operating systems. It's the overall combination of these that sets the two phone ranges apart.

However, there is a clear difference in the cameras that both phones have.

For the primary wide lens on the S22 Ultra, it has an f/1.8 aperture, which isn't as fast as the f/1.5 on the iPhone 13 Pro and iPhone 13 Pro Max. This also gives the iPhones better performance in low light. Apple also has a wider aperture on the ultra-wide lens, boasting an f/1.8 versus Samsung's f/2.2.

Samsung has improved its optical image stabilization year-over-year, putting it close to Apple's sensor-shift stabilization in terms of performance. 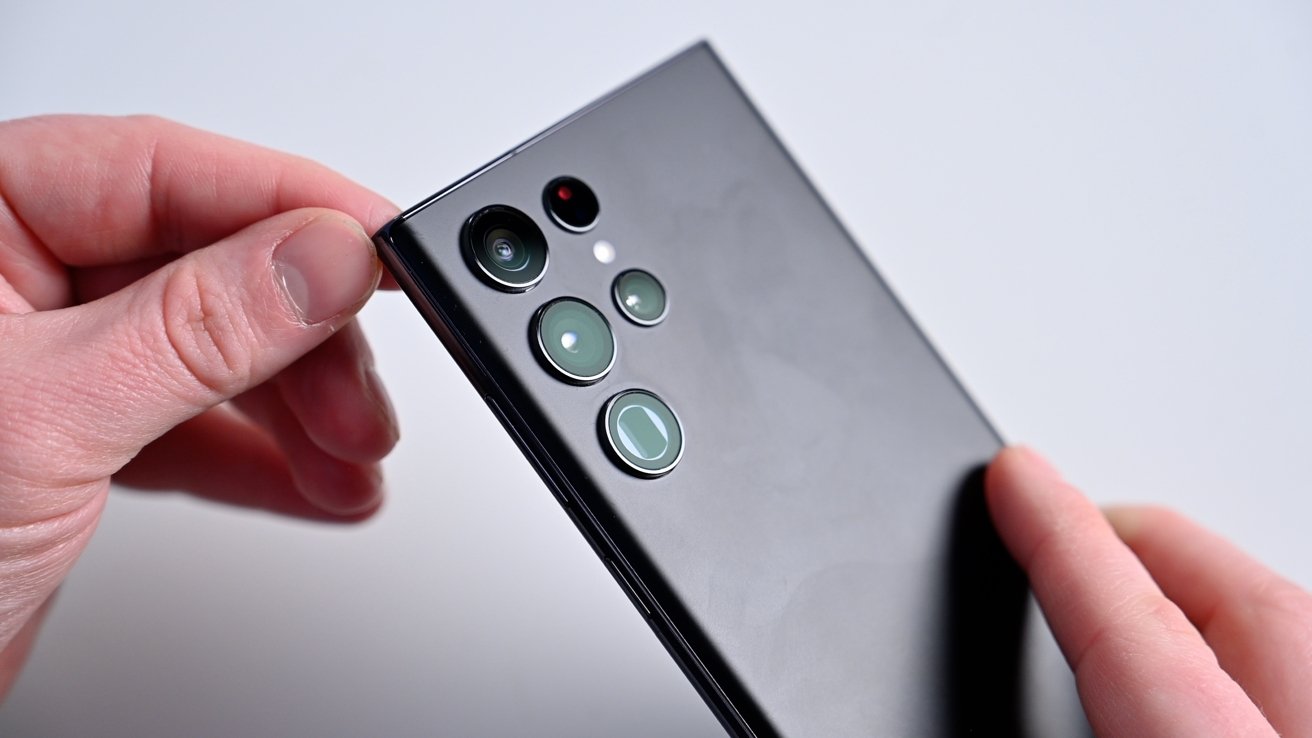 The S22 Ultra also differentiates itself by tacking on an additional telephoto lens, for a total of four lenses. It offers both 3X and 10X optical zoom whereas the iPhone 13 Pro and iPhone 13 Pro Max both only offer 3X optical zoom.

There's a great deal more to phone camera systems than the megapixel count, but Samsung also has a better specification for the front camera. Where Apple has famously lagged behind, only recently moving to a 12MP front camera, the S22 Ultra has a 40MP one.

Samsung and Apple out of step

Apple and Samsung regularly announce their phones at significantly different times of the year. So while the S22 and iPhone 13 range will remain the main models for both companies for some time, Apple will be releasing the iPhone 14 range in September.

Preorders for Samsung's S22 range are going on now at Amazon and from Samsung directly, with units shipping on February 25.