Which upgrades are worth it for the Mac Studio

AppleInsider
Posted: March 9, 2022 5:24PM
in Current Mac Hardware edited March 9
Apple has limited the options for upgrading a Mac Studio, yet while that makes the decision simpler, there are still costly choices to make that could decide whether this is the Mac for you - or not. 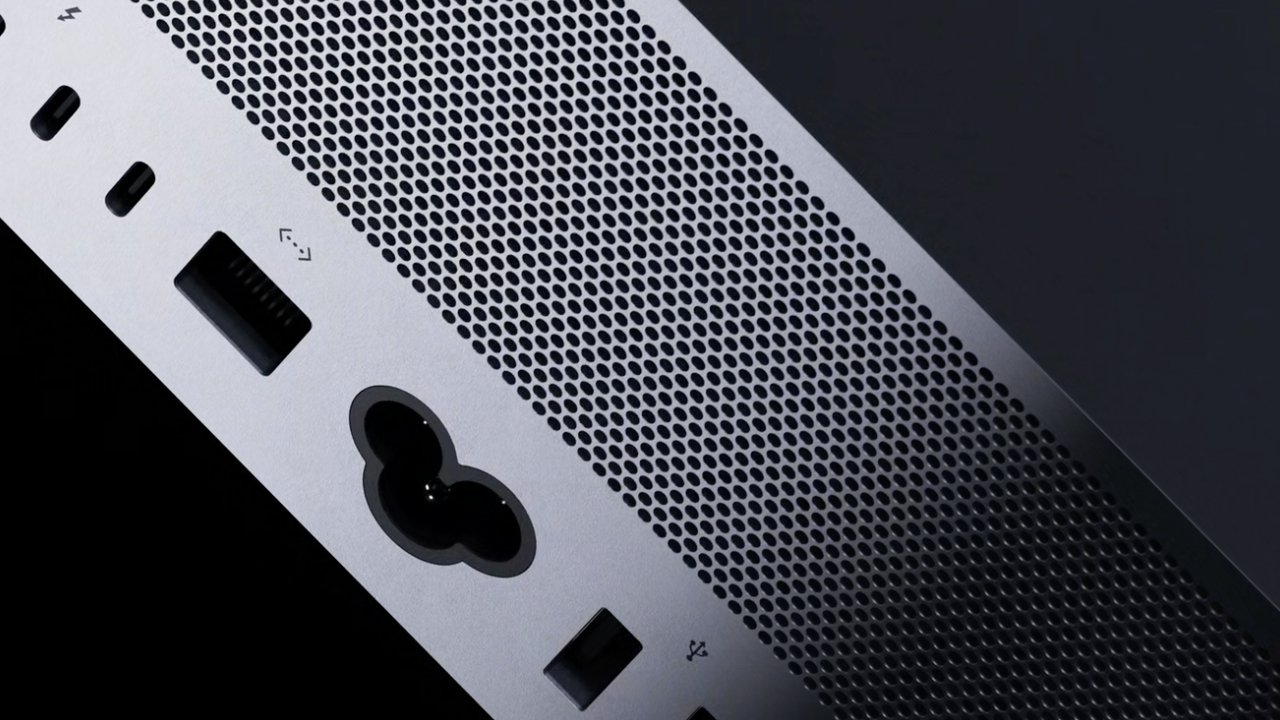 It used to be that if you needed a Mac Pro, you knew it - and you definitely knew whether you had the budget to get one. After that, it got more complicated with processor choices, RAM decisions, picking the right graphics card and so on.

But up front, it was simple. High performance, high price, you knew whether that worked for you or not.

Now the new Mac Studio isn't exactly affordable, but it is a lot closer to being so for a lot more people than the Mac Pro is. It's still simple if you know you need high-end performance, you just buy a Mac Studio instead of a Mac Pro. At least until Apple cranks out a new Mac Pro.

But it also means that there is a grey area where the Mac Studio might or might not be the best machine for you. And it's an area that gets even greyer since a Mac Studio should be expected to last for many years.

As much as you can, you need to be thinking about future needs, too.

If you're never in one place, or if you always have to work on the go, ignore the Mac Studio and buy a MacBook Pro instead. The Mac Studio is about as portable, or transportable, as the Mac mini, but it can only really be used at your destinations, not en route. 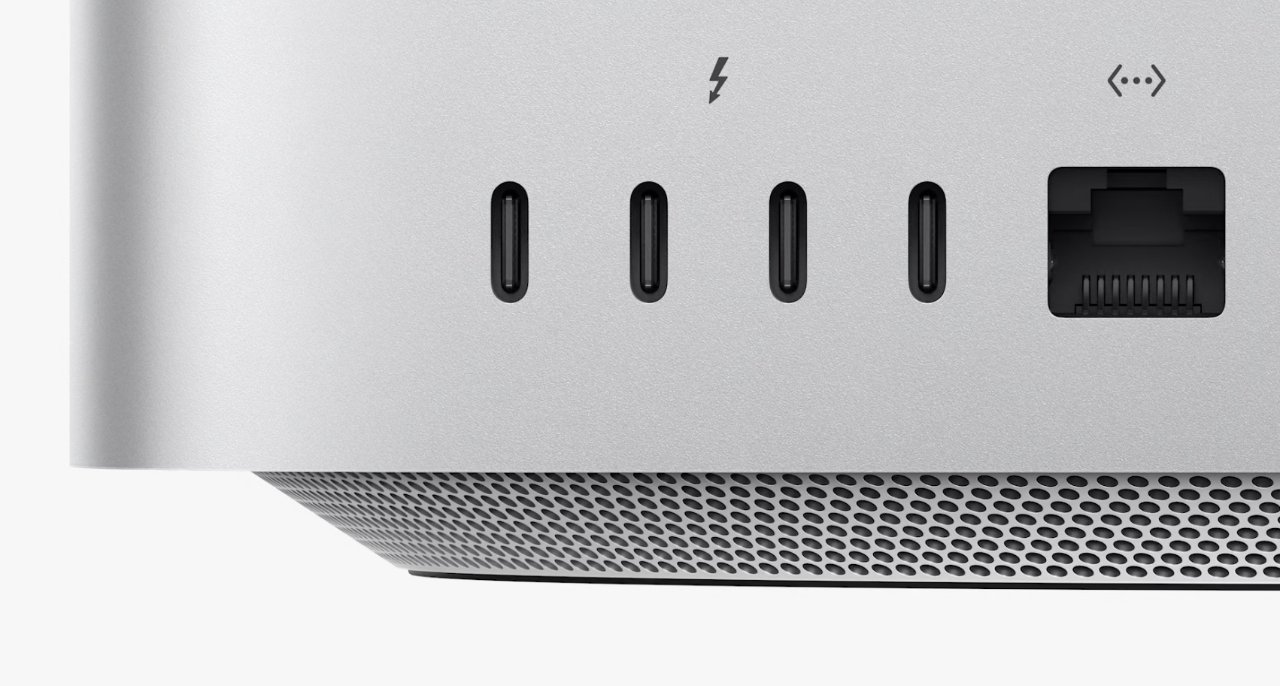 It's probable that the majority of Mac Studio buyers are going to be people who already use a Mac desktop. There may well be new buyers, switching from Windows, but you can imagine that Mac mini and Mac Pro users are going to be first in line.

That's the low and the high end of the Mac market in terms of performance, both focused on this new machine. They're each going to have different concerns, different needs.

Regardless of what work you do, if you have an Intel Mac mini, it's time to change. You could look at the Apple Silicon Mac mini, and you would notice the difference, but even that can be made to struggle under workloads like video editing.

So if you've any thought, any wish about moving on from a Mac mini, the M1 Max Mac Studio will probably solve all your problems.

For the current Mac Pro user, there is one question about the performance they need, and another about whether they can recoup any of the costly investment they made in this machine.

Hopefully they've had a couple of years of solid use out of the Mac Pro, and unlike the Mac mini, it's less likely that the Mac Pro is struggling with a workload. However, that's for now, and people who need Mac Pro machines tend to need all the power they can get.

As for recouping investment, Apple is not doing a specific trade-in option with the Mac Studio the way it does with an iPhone - there's nothing on the order page asking if you have a Mac to trade in.

But Apple does operate a trade-in service, and currently it will pay up to $2,720 for a Mac Pro. Just be sure to remove your third-party upgrades first.

Bring Your Own Keyboard, Mouse and Display

Users of Mac Pro and Mac mini have an advantage in that they already have peripherals that will just swap over to the Mac Studio. So for them, the choice is about the major components of the Mac itself

Making you choose components gives you choice, but it also lets Apple list a base price for the Mac that might not be close to what you end up having to spend. Mac Pro users demanded flexibility, and they got it with complex choices and options to work through.

For the Mac Studio, the base model offers you 12 choices. With the high end of the new Mac Studio, it's just 8. 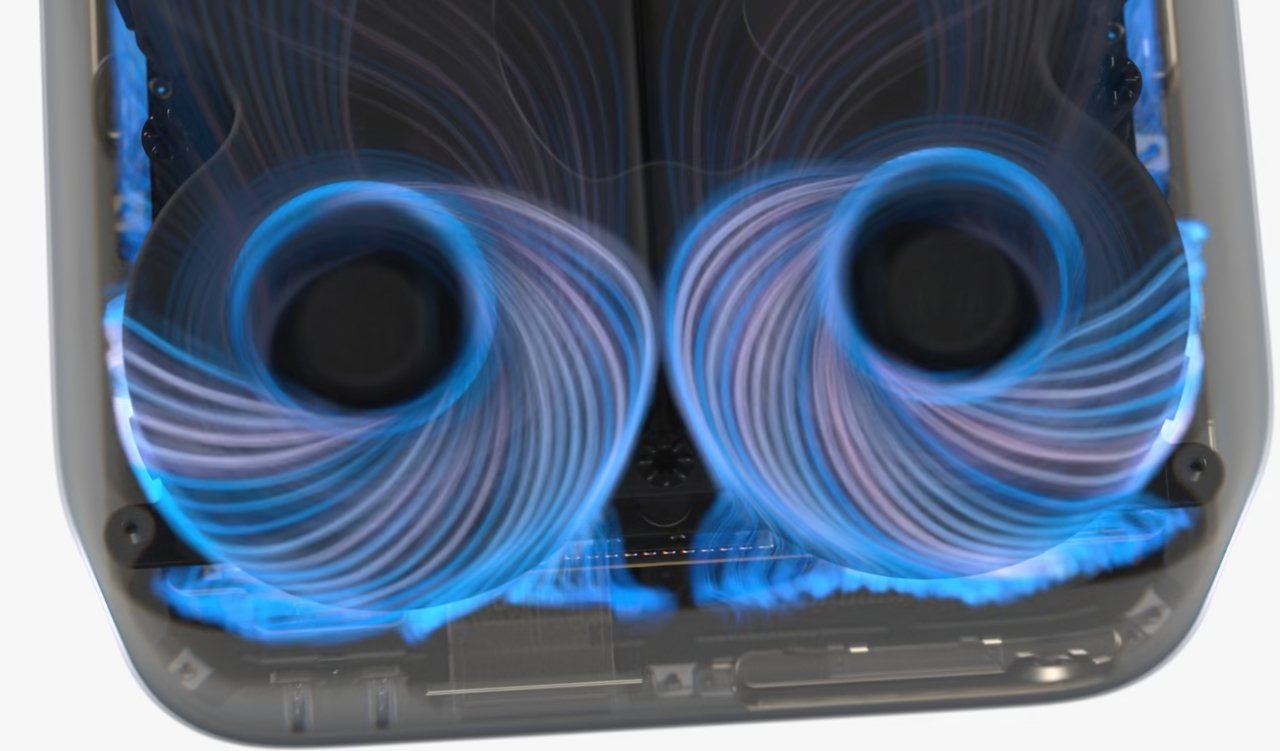 As always, Apple offers a couple of Mac Studio machines on its website, but they're really the same machine with two different, recommended configurations. More normally, Apple sets out three configurations, either implying or directly stating that these represent Good, Better, and Best options.

In this case, there are just the two, and whatever your needs, you can start with the base $1,999 edition and work your way through the Build to Order choices to get the best option for you.

Right there, though, are your two easiest decisions. Debatably, the 32GB RAM might be sufficient, but you'll want more - and you will require more storage space.

It's true that 32GB of unified memory does more than we're used to with 32GB of regular RAM, but it's still a case of the more, the better. As for storage, if you do any photograph work, any music, or any video, then it's significantly easier and faster to have them on the machine's own drive as you work.

After all, a direct-connected Thunderbolt drive will only hit about 3 gigabytes per second. Internal storage on the Mac Studio can exceed 7 gigabytes per second -- but which configurations are needed for that peak speed versus a slower one isn't clear now.

You can get fast external SSDs, and you may be in a studio with a WAN and networked storage. But the more working space you have on your actual Mac, the better.

With RAM, you initially only have the option of upgrading it to 64GB unified memory, for a cost of $400.

You can take it to 128GB RAM, but only if you also change the processor from the base version. 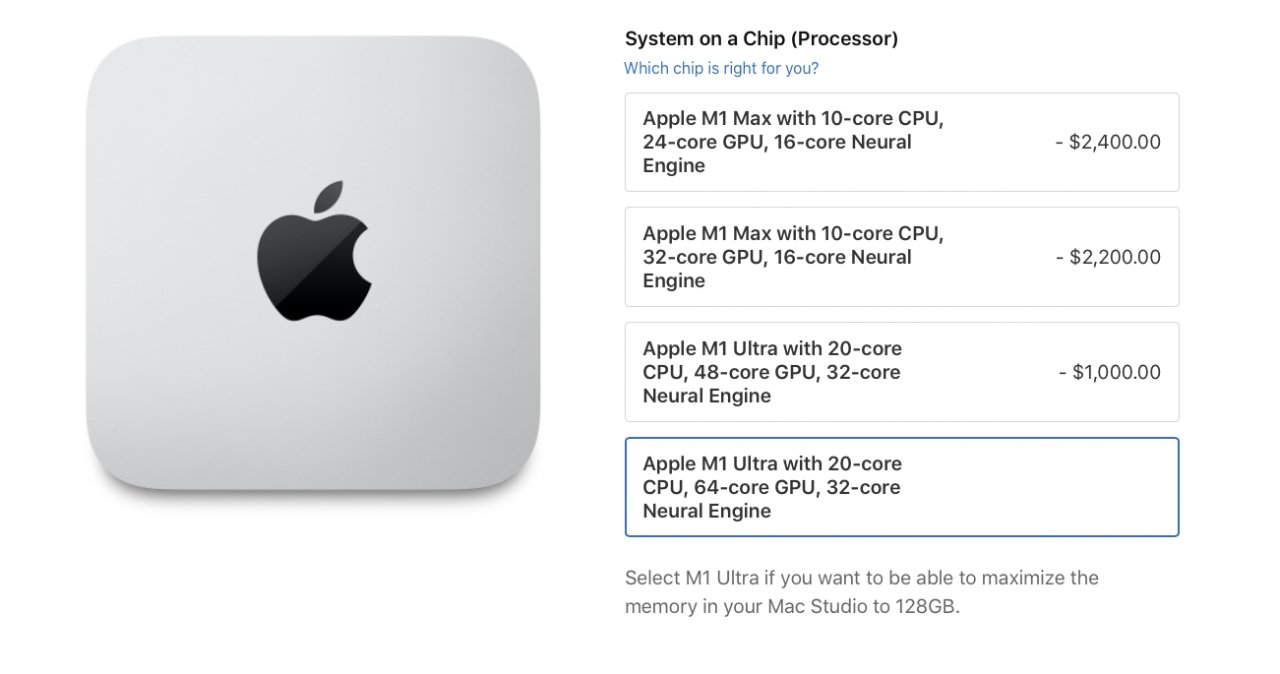 Apple unveiled the Mac Studio with two processors, the M1 Max, and the M1 Ultra. There are, though, two versions of each, for a total of four processor choices.

If it weren't for how that $200 price difference is small compared to any other processor upgrade option, it wouldn't seem worth it. Nonetheless, if you do photography as a small part of your work, you will see a difference from the 32-core GPU.

Overall, upgrading the number of GPU cores has to help performance, so intensive photography work, medical and science modelling, or video, benefits from more GPU cores. However, if performance is a real requirement, you don't just want more GPU cores, you want the M1 Ultra.

Again, there are two flavors of M1 Ultra. Both use the new 20-core CPU M1 Ultra processor, with 32-core Neural Engine. One version, though, has a 48-core GPU, while the other is a 64-core GPU.

The difference there is similar to the M1 Max adding more GPU cores. You have to be doing pretty intensive imaging work for it to be worthwhile, but if you are currently forced to wait long times for renders, this power will help with that

Choosing what you need, and what you can afford

If you order a Mac Studio with the M1 Max processor, with less than 1TB SSD, and with only 32GB RAM, you're doing so to hit a budget. There's obviously nothing wrong with that, and even if there were, you can't buy what you either can't afford, or can't justify the expense of.

There are users who can get by with 512GB, but it's really offered more so Apple can hit a price point. If you are dealing with large files in your workflow, and many of them, then the ability to work on them locally instead of constantly shuttling them back and forth to external drives makes 512GB too small.

Large files are the norm for video work, or enormous databases, and there your Mac Studio could be taking in footage at the start, then rendering out extremely high-quality video at the end. The processing in the middle is intensive, and RAM helps.

There is an oddity with Apple's Build to Order options. If you choose Apple's suggested $3,999 base, you don't get an option for a 512GB SSD.

Yet if you start with the base $1,999 edition, you can upgrade the processor, and even RAM, to match the higher starting price machine, and keep the 512GB option.

Then the Mac Studio's Build to Order page does not include options for the new Magic Keyboard, Magic Mouse, or Magic Trackpad. There is no configuration in which you get offered these as you build your Mac Studio options, so unless you're coming from a Mac mini or Mac Pro, you have to buy them separately.

You can save a whole $20 by going for the new Magic Keyboard with white keys, instead of black ones

They're in the online Apple Store, but when you order any other Mac except the Mac mini, you at least get offered the keyboard, mouse, and trackpad on the order page.

Consequently, if you max out everything on the Mac Studio order page, you get a total of $7,999 - and it's not enough. Unless you already have all of these accessories going spare, you need to spend a further $199 on the new keyboard, and either $99 for the new mouse, or $149 for the trackpad.

Oddly, you could save a little by choosing the Magic Keyboard with white keys instead of black ones, but for the sake of 20 bucks, the black version is more stylish.