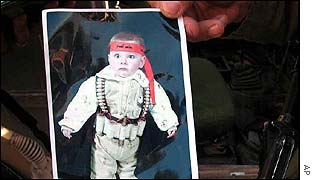 The Israeli army has released a picture it says was found during its incursion in the West Bank town of Hebron showing an infant dressed as a Hamas militant wearing a suicide bomber's harness.

The army says the controversial picture was found in a family album during a search of a house belonging to an alleged Hamas militant, although there is no independent confirmation of its authenticity.

......The picture - which the Israeli army says is genuine - shows a boy, about 18 months old, standing wide-eyed in a baby suit.

Red wires are strapped to his waist, which is clad in a pretend explosives belt, and across his head is tied a red bandana of the extremist Islamic group, Hamas. ....