AppleInsider
Posted: September 20, 2012 6:31PM
in General Discussion edited January 2014
As Apple Stores open their door around the world to lines of customers waiting to get their hands on a new iPhone 5, repair site iFixit has started its traditional teardown of the device.

Update: iFixit has completed its teardown of the iPhone 5 and awarded a repairability score of "7 out of 10." Of note, it appears that at least a few Apple's A6 processors are not using Samsung memory as previously thought, as iFixit's iPhone came with an SoC equipped with a memory module from Elpida. The firm also posted a video of the procedure, which is embedded below.

The repair firm managed to snag a "black and slate" copy of the device in Australia, the first country to see official iPhone 5 availability, within the first hour of sales and proceeded to disassemble the device for its usual comprehensive teardown.

The first steps of revealing the innards of Apple's most advanced smartphone include removing the small proprietary pentalobe screws that attach the unit's 4-inch display to the aluminum "uni-body" back casing. A suction cup was used to easily lift the screen assembly away from the rear housing, a departure from the involved removal procedure seen with the iPhone 4 and 4S.

The iPhone 5's screen is easy to remove compared to the iPhone 4 and 4S.

"Compare this to the iPhone 4s, where it took 38 steps to isolate the display assembly, and this iPhone may be the most repairable iPhone we've seen in a while," iFixit wrote.

The cramped space inside the iPhone's shell is stuffed with components:

So, what can we see from here? a bigger battery? antenna connections? a single speaker? cameras? vibrators? home buttons?

To the right of the larger power cell is the the logic board, which contains the high-performance A6 chip, baseband system, storage and a litany of other essential components.

A number of Apple-branded silicon is clearly seen after removing the protective EMI shielding, as well as a Hynix RAM module.

With help from Chipworks, the logic board's packages were identified:

Reverse side of Logic board:

According to iFixit, "many of the components that came out with the logic board are held in place with screws and brackets."

Apparently Apple is very concerned with making sure that all the connectors are firmly seated and won't rattle lose over time. Good on you, Apple.

On the reverse is Apple's A6 processor, which is said to be twice as fast as its A5 predecessor. A recent test using the SunSpider JavaScript benchmarking tool confirmed Apple's new SoC is utilizing a different memory interface than normal ARM Cortex A9 chips as it outperformed identical processors based on the same ARM-patented technology.

The A6 is also though to be Apple's first attempt at designing an ARM core in-house, however the internal architecture has yet to be investigated.

Wrapping up the teardown is a look at Apple's new Lightning connector. There has been mixed emotions with the new plug, as the move away from Apple's 30-pin design means the iPhone 5 may not work with legacy aftermarket accessories without an adapter. The company claims there was no way to make such a thin handset without the new connector, however, and said the standard is expected to be used for foreseeable future.

Overall, iFixit gives the iPhone 5 a "7 out of 10" score for repairability. 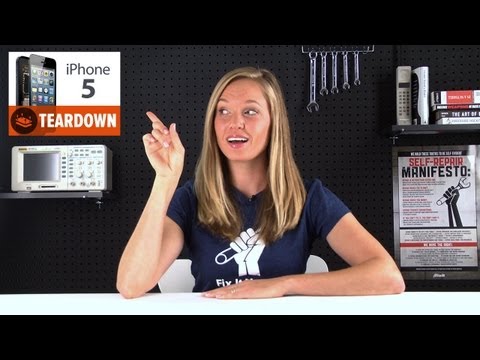 In a related development, Japanese site iLab Factory (via Mac Otakara) posted what is believed to be the first video of an iPhone 5 teardown moments before iFixit's announcement. 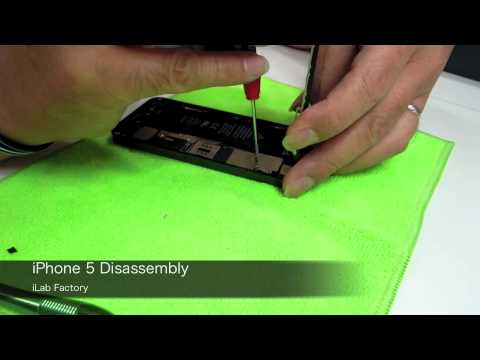