AppleInsider
Posted: March 11, 2016 10:45AM
in General Discussion edited March 2016
U.S. Attorney General Loretta Lynch toed the line in an appearance on The Late Show with Stephen Colbert on Thursday, and reiterated that the government is merely requesting Apple for help in unlocking a single iPhone linked to last year's San Bernardino terror attack, not a backdoor into iOS.

While not the main topic of discussion, Colbert touched upon the contentious encryption debate sparked by Apple's resistance of a court order compelling its assistance in the ongoing FBI investigation.

"Well, you know we've disagreed publicly in court, and I've had a number of great discussions with [Apple CEO] Tim Cook on issues of privacy," Lynch said. "What I'll say about this, though, is I understand why this is important to everybody, because privacy is an important issue for everyone. It's important to me as the attorney general, it's important to me as a citizen."

Attempting to provide context, Colbert incorrectly claimed the Department of Justice wants Apple to create a backdoor into iPhone, specifically a device issued to terror suspect Syed Rizwan Farook by his former employer the San Bernardino County Health Department. As stated in legal briefs and a very public campaign for public sentiment, the DOJ is asking Apple to create and sign an intentionally flawed version of iOS to suppress the passcode attempt counter on Farook's phone. FBI agents will brute-force the device to extract actionable data pertaining to the case, if any is present.

Colbert brought up one of Apple's main contentions in its case to resist government pressure, noting that the creation of a new operating system puts undue burden on the company's resources. He also made note of the slippery slope argument presented by Cook and other Apple executives in recent interviews.

Apple has argued that a government win in the San Bernardino court case sets dangerous precedent for future law enforcement requests. The FBI and fellow agencies would be granted a powerful tool that could one day be used to compel technical assistance far beyond software construction. For example, Cook and SVP Eddy Cue said in separate interviews that government agents might leverage precedent to force Apple to remotely turn an iPhone camera or microphone.

"First of all, we're not asking for a backdoor, nor are we asking anyone to turn anything on to spy on anyone," Lynch said. "We're asking them to do is do what their customer wants. The real owner of the phone is the county, the employer of one of the terrorists who's now dead." 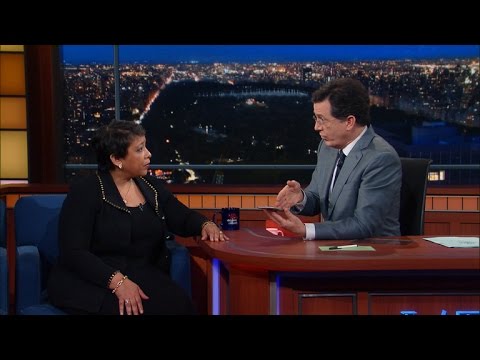 Lynch said much the same in an interview earlier this month when she suggested Apple treat the case like a normal customer service call.

Last night's segment comes on the heels of a court filing from federal prosecutors in support of the government's request of Apple, a letter that both addressed and attempted to dismantle each of Apple's assertions.