Apple Car: It's about the experience

AppleInsider
Posted: April 14, 2016 10:02PM
in General Discussion edited April 2016
As part of its highly speculative look at "Apple Car," Motor Trend invited AppleInsider to take part in a roundtable discussion to critique a collaborative concept design worked up in partnership with the ArtCenter College of Design.

Whereas carmakers dedicate entire teams, often years of man hours, to nurture a design from concept to production, Motor Trend gave Garrett DeBry, ArtCenter graduate and current industrial designer at Radio Flyer, mere weeks to commit his vision to paper. The end result: a mono-volume stripped of all unnecessary frills and flourishes, structured to maximize interior capacity and iterated around a simple concept: user experience.

The "E" word was bandied about early and often at Motor Trend's roundtable, but the subject was broached long before in a meeting at ArtCenter's Pasadena, Calif., campus last year. There, Motor Trend Testing Director Kim Reynolds asked influential design gurus like Stewart Reed, ArtCenter's chair of transportation design, to brainstorm Apple Car into existence.

DeBry was there, as was professor of graduate transportation systems Tim Huntzinger, who currently works at an augmented reality company based out of Los Angeles called DAQRI. Faculty member Tim Brewer and automotive interior specialist Di Bao were also on hand.

The group tossed ideas back and forth, with DeBry distilling salient points into his minimalist concept. Borrowing a page from Apple's design book (written in ink by Sir Jony Ive), DeBry applied a form follows function ruleset and inverted current automotive design philosophy, sculpting from the interior out. The windshield, for example, needed to be large enough to support the laser-driven augmented reality system around which the car is built. By extending the wide open cockpit experience aft, DeBry creates a space conducive to driving, but more importantly to autonomous vehicle ride sharing.

Striking by nature, the mockup is not so much a stab at what Apple's car could be as it is a study in Cupertino's user-first design tenets. As applied to four-wheeled passenger vehicle, of course.

Our roundtable benefitted from Reynolds' pre-gaming, and we were primed to wax poetic on user experience, which according to consensus would be Apple's "killer feature." Reynolds, DeBry and Huntzinger were joined by CNET Roadshow Editor-in-Chief Tim Stevens and myself. Motor Trend Editor-in-Chief Ed Loh officiated.

Pulling the user experience thread, we discussed the inevitability of vehicle autonomy. On its current course, the car industry will see software and sensor laden self-driving autos being produced side-by-side with "dumb" cars. This will necessarily lead to a fundamental shift in driver and passenger experience. Indeed, everyone sitting in an autonomous vehicle is by definition a passenger, one being carted around by a machine chauffeur.

The concept, then, imagines a cocoon-like environment with traditional leather and metal appointments, like a long arcing dash, onto which virtual displays are projected. Huntzinger notes humans -- at least in these early days of auto autonomy -- require feedback to feel safe. In another nod to user experience, visual and audio cues routed to Apple Car's windshield and dash displays keep users abreast of the computer unit's decision making process.

An augmented reality system may not need to alert the driver to oncoming traffic, pedestrians or road conditions, but those niceties go a long way in building confidence. DeBry considered this as well, pointing to the use of pink in display overlays, a color said to have calming effects.

Siri ties everything together, which means a barebones version must live onboard. The car is basically a huge connected device, and that makes it incredibly powerful, but drivers will at times find themselves in areas where network service is spotty. 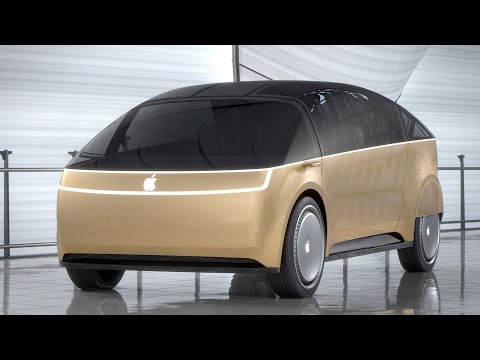 When rumors first surfaced last year, the automotive industry gave little thought to Apple's automotive aspirations save for brief, sometimes glib, asides from the likes of Fiat Chrysler CEO Sergio Marchionne. But that is quickly changing. Execs are turning the corner, some of whom have taken a more welcoming position toward tech firms dabbling in advanced autonomous solutions.

Despite its storied lineage, the automotive industry seldom sees disruptive events, and paradigm-shifting products like iPhone are even more rarity. The past 20 years of automotive history has been quiet, but things appear to be picking up with a push toward electric drivetrains, integrated systems and intelligent onboard computers. Now Apple is rumored to throw its ten-gallon hat into the ring.

Apple is unquestionably adept at remolding existing technology to create a new reality. How the company can achieve that on a larger scale -- in an entirely new industry -- is unclear.

As for the concept, Motor Trend's imagining might be completely off. Perhaps we'll never know. More importantly, Project Titan is slowly making its way into the zeitgeist, serving as a catalyst for discussion. Industry insiders are considering the implications of tech companies dipping their collective toes into automotive solutions, consumers are voicing opinions on design and pundits are speculating on speculation.