AppleInsider
Posted: May 2, 2016 3:19PM
in Current Mac Hardware edited May 2016
Apple was able to squeeze out an extra hour of battery life and modest performance gains from its second-generation 12-inch MacBook, but is that enough to warrant an upgrade from the 2015 model? Find out in AppleInsider's head-to-head video. 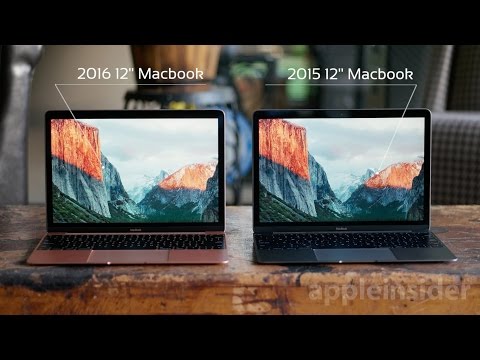 With the recent update of the 12-inch MacBook, Apple touted not only battery life increases but also improved performance. Packing a new Skylake processor and integrated graphics, along with faster storage and memory, we wanted to check for ourselves how much of a performance boost the 2016 MacBook provides over last year's model.

We started off comparing the SSD speed which was faster and more consistent in the new MacBook. This should result in a faster loading applications and bootup of the Mac, but in real world usage, we didn't notice much of a difference.

Next, we used GeekBench 3 to test processor performance. Both finished the test at about the same time with the latest MacBook being just slightly faster. Our next test is a CPU and GPU rendering test called Cinebench. Once again the 2016 Macbook pulled ahead by just a bit. (show on screen 4 percent CPU and 10 percent GPU). Moving onto the web browsing benchmark Octane, the new MacBook gets a marginal improvement.

For photographers, we put these MacBooks head to head exporting edited photos with latest version of lightroom. The latest MacBook was about 14 percent faster, which is really negligible unless for some reason your editing thousands of photos on this machine, of the much better suited MacBook Pro.

Taking it one step further we ran the Final Cut benchmark BruceX, which pushed the machines to their limits in video editing. This is the one area we saw a major improvement in, with an almost 300 percent improvement with the 2016 Skylake Macbook. Even so, unless you really need the ultraportable design, video editors will have a smoother experience on a MacBook Pro, which starts at the same price of $1,299.

If you wanted to buy a 12-inch MacBook but were waiting for some big performance improvements, you'll likely need to wait a few more years, or just settle for one of Apples slightly larger offerings that pack a more powerful punch.
«123»