AppleInsider
Posted: August 19, 2016 7:10PM
in iPhone edited April 2017
Reviewers and YouTube examiners are discovering that the new Samsung Galaxy Note 7 Gorilla Glass 5 screen is susceptible to screen scratches. However, the Gorilla Glass manufacturer Corning disagrees with the test results, and has fired back. 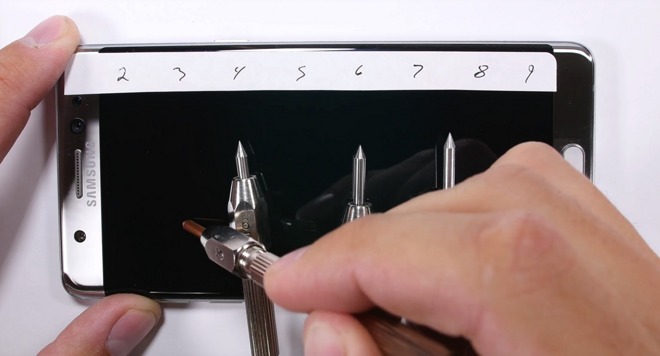 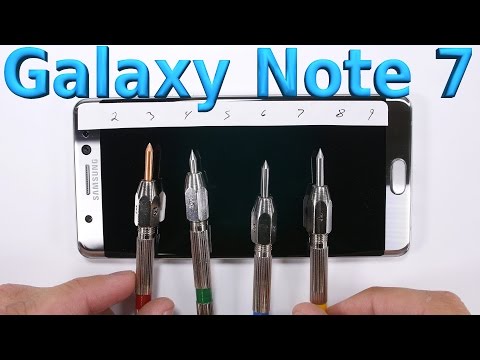 The Mohs hardness scale ranges from 1 to 10, with talc having a rating of 1, and diamond coming in at 10. Sapphire crystal is rated at 9, with Gorilla Glass, and all glass, falling in between 5 and 7, depending on hundreds of variables introduced accidentally or intentionally during the manufacturing process. Beach sand has several components, but generally peaks at a Mohs hardness of 8.5, explaining why sand in a bag with a phone results in a badly scarred device. JerryRigEverything succeeded in damaging the screen with a testing pick of Mohs hardness 3. A tempered glass screen protector tested in the video in parallel with the Galaxy Note 7 was scratched with hardness 5 pick. The iPhone 5s screen with Gorilla Glass 3 was rated at a Mohs hardness of 6.8. The Mohs rating of the iPhone 6 with Apple's ion-hardened glass is not known, but does scratch more readily than the iPhone 5s does. The tester claims that most smartphones, including the iPhone, are scratched at around hardness 6. A screen scratching at hardness 3 is only slightly more scratch resistant than plastic. 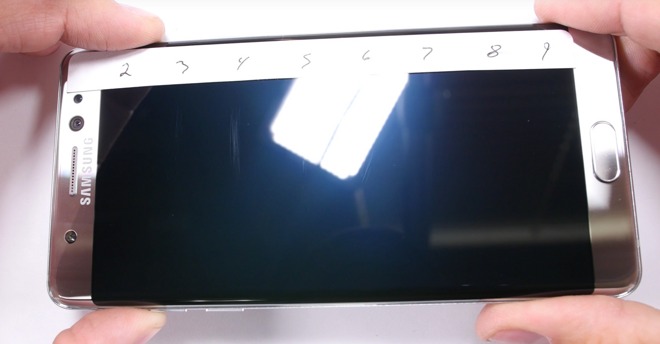 Corning responded to the video in an interview with Android Authority. The glass manufacturer takes issue with the testing method, erroneous conclusions based on the damage, as well as discusses the characteristics that make Gorilla Glass suitable for portable electronics. "The hardness pick that was used in the video was a 3, that's considerably softer than the glass material," said Corning Vice President of Technology Jaymin Amin. "When you have a softer material like that, and depending on what kind of loads you have used, you tend to see material transfer on the test substrate." "Material transfer on the test substrate is not necessarily a scratch," added Amin. "But it can appear to the untrained eye as a pretty visible scratch." Corning blames a possible non-uniform pressure by the tester for why the theorized deposition of material increases as the hardness of the picks escalate. The company also claims that they have seen the same phenomenon in the lab under more controlled circumstances than the YouTube video. The tester uses what appears to be an optical cloth to remove any deposits on the glass from the testing. The video appears to show no removal of debris whatsoever, and has no apparent effect on the screen damage. 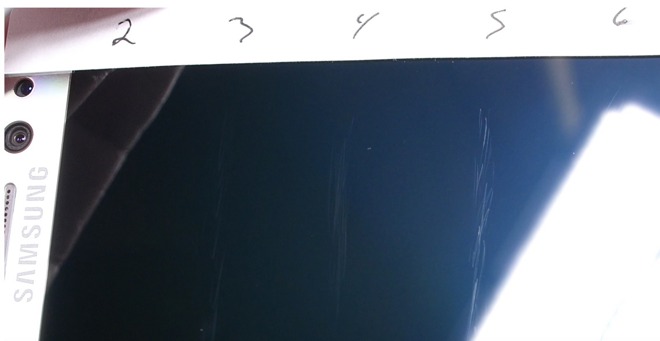 "It can be very, very difficult to remove metallic material transfer from glass," said Corning Business Technical Director Jon Pasansky. "It is very atypical to see in a field return when we look at scratches of glass that kind of characteristic, but purely visual, perceived damage that is actually a material on top of the surface." Mohs hardness evaluations are all about scratch resistance, and have very little to do about glass overall chip or shatter resistance. Corning's Gorilla Glass, and Apple's ion-strengthened "Ion-X" hardened glass formulations are more about preventing the propagation of cracks, similar to when a minor defect in a car's windshield grows rapidly after a shock from the car hitting a pothole. "When we consider all hardness tests, Gorilla Glass 5 is actually harder than Gorilla Glass 4," said Amin. "we believe that GG5 should be performing similarly to GG4." Regardless of the reason for the screen's appearance following the testing and explanations by Corning on what the marks on the screen are from, the Samsung Galaxy Note 7's screen appears to be more readily impacted by scratches, or difficult to remove materials embedded in the screen, than previous models with older Gorilla Glass variants. Apple was said to abandon wide use of the harder sapphire for iPhone and iPad screens because of the collapsed deal with sapphire glass fabricator GT Advanced. The deal which never delivered sapphire glass in any giant quantity needed for screen use lead to the bankruptcy and sale of the foundry's assets. Sapphire glass is used by Apple in Touch ID sensors, iPhone camera lenses, and the non-Sport versions of the Apple Watch. Corning has claimed in the past that despite sapphire's greater Mohs hardness, screens made from the material would be more susceptible to breaking and less optically clear than its own Gorilla Glass. AppleInsider has reached out to Corning for further comment on the matter.
«1234»