While orders for the standalone monitor are not expected to go live for at least another week, YouTube tech reviewer Marques Brownlee was able to get his hands on a production unit for testing alongside the new Touch Bar MacBook Pro.

Like most unboxing videos, Brownlee offers a basic specifications rundown and reveals bundled accessories which include a power cable, Thunderbolt 3 cable and VESA wall mount. The video also includes a quick setup and hardware feature tour.

As noted by Apple during October's media event, the LG 5K UltraFine acts as a central Thunderbolt 3 hub for the new MacBook Pro lineup. With built-in speakers, three USB 3.1 ports and 85 watts of charging power, the display serves as a suitable replacement for the erstwhile Thunderbolt Display.

Measuring 27 inches on the diagonal, the 5K UltraFine model supports resolutions up to 5,120-by-2,880 with DCI-P3 color, a wide color gamut standard Apple first adopted with the 9.7-inch iPad Pro. The P3 colorspace is now available on the Phone 7 series and current MacBook Pro variants.

The 5K UltraFine Display accompanies a smaller 21.5-inch 4K model that features many of the same trappings, but pares down connectivity to one USB 3.1 port and 60 watts of charging power. 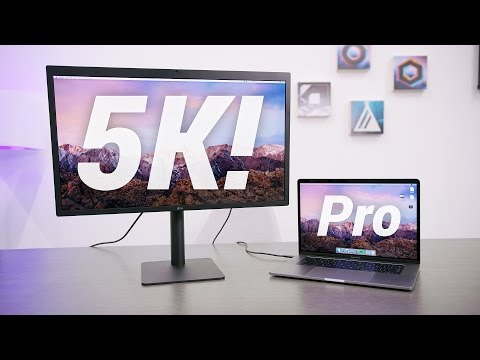 Early preorder customers are already receiving shipments of the 4K model, though current order estimates show a lead time of 5 to 6 weeks. The 5K model is not yet up for purchase, though Apple's website estimates availability in December.