AppleInsider
Posted: April 17, 2017 3:45PM
in macOS
Enthusiasts have wasted no time in testing the new Nvidia Pascal video card drivers, and have found external GPU performance nearly four times that of the Radeon Pro 450 in the 15-inch MacBook Pro.

External GPU enthusiast site egpu.io has affixed a GTX 1080 Ti to an AKiTiO Note and Mantiz Venus enclosure -- similar to that used for AppleInsider testing in January. While the cards may be hamstrung slightly by the Thunderbolt 3 interface not being as fast as a 16x PCI-E slot, the results are nonetheless impressive.

An external GPU feeding video back to the screen of the same MacBook scores 22,673 with a Nvidia GeForce GTX 980 Ti, and 23,172 with the newly enabled 1080 Ti. At this time, the group does not have the new Nvidia Titan Xp video card for testing.

On the 15-inch MacBook Pro with Touch Bar, the Thunderbolt 3 controllers are directly connected to the CPU, eliminating any possible bottleneck through the PCH-H controller.

AppleInsider's own testing on eGPU suitability for users will continue with a Mantiz enclosure, and a casing from Bizon. 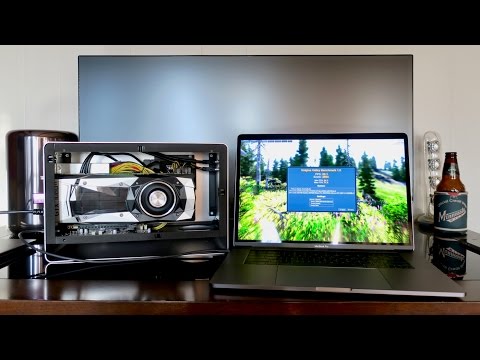