AppleInsider
Posted: December 1, 2017 12:36AM
in iPhone edited November 2017
Both Apple's iPhone X and the Samsung Galaxy Note 8 feature dual-lens rear cameras, but which one takes better photos? AppleInsider puts the two flagship smartphones to the test. 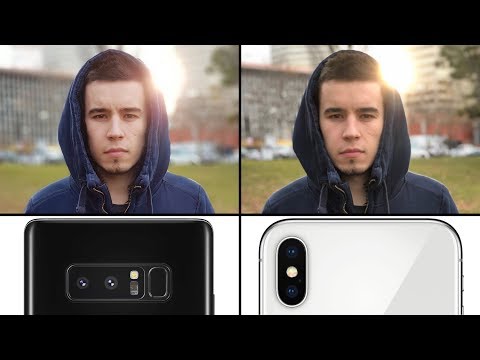 Samsung's Note line of phablets has been around for years, but the Note 8 is the first model to include a dual rear camera array, similar to the one introduced with Apple's iPhone 7 Plus.

Apple's latest iPhone X handset features a dual-camera system like the iPhone 8 Plus and 7 Plus before it, but with some noteworthy improvements such as the addition of optical image stabilization on both lenses.

The specs of the rear cameras on the iPhone X and Note 8 are are pretty similar. They're both 12-megapixel modules with a 2x optical zoom feature, and both phones have dual optical image stabilization.

With the Note 8, Samsung introduces Live Focus, its own version of Apple's rear-facing Portrait Mode feature. Live Focus lets users adjust the amount of background blur in real time, as well as in post, a benefit Apple's Portrait Mode does not afford. With iOS 11, iPhone owners can enable and disable the blur effect, but the amount of blur is a preset standard.

The Note 8 also gets a Dual Capture feature which takes two photo using both lenses while in Live Focus mode, allowing users to switch between wide and telephoto views in post. Additional customization options are also available using Pro mode with the Note 8.

Comparing the phones' front-facing cameras, the Note 8 edges iPhone X out in sheer megapixels with its 8-megapixel shooter. The iPhone X incorporates a 7-megapixel camera as part of the sophisticated TrueDepth depth-sensing camera system, which allows for Face ID authentication and a other features like Selfie Portrait Mode.

To compete with Apple's new selfie feature, the Note 8 also has a selective focus front-facing mode that relies largely on software to achieve the desired effect.

Starting with rear-facing Portrait and Live Focus modes, we instantly noticed that the Note 8 was over-saturating the colors. The iPhone X's colors are much more accurate to what we saw through our eyes. The Note 8 did, however, do a better job of taking care of the glare near the bottom of some photos.

Cropping in, we can definitely tell that the Note 8 looks sharper. The X's image looks slightly out of focus, but it's the best out of three photos that we took, so it may just be a side effect of unwanted glare.

Moving on to the wide lens, we don't see much of a difference save for the over-saturation on the Note 8. We also can tell that the iPhone X has more contrast if you look at the ground. Cropping in, we see a bunch of noise on the hoodie with the Note 8. The iPhone X does look slightly sharper as well.

Moving on to selfie mode, the Note 8's colors don't seem too bad this time, but you can tell that the iPhone X has more contrast. We can also see more detail in the sky on the X, compared to the Note 8 which looks pretty blown out. Cropping in, the iPhone X looks just a bit more detailed than the Note 8.

Looking at a wide photo of a tree, the colors are very different, with the iPhone X being the most accurate. We can also tell that the X has more contrast compared to the Note 8's image, which lacks detail. Cropping in, the X looks more detailed, but it could be due to the lack of contrast on the Note 8.

The same tree with a telephoto lens shows iPhone X's colors are more true to life, and the contrast makes it look more pleasing to the eye. Cropping in, we can actually see that the Note 8 is a bit sharper, but due to the lack of contrast, it's hard to tell at normal viewing levels.

Next up is a couple of selfies using Selfie Portrait and Selective Focus modes.

We can see that the two systems work a bit differently. The Note 8 actually adds a bokeh ball effect along with blur, and it maintains details in the foreground, like the jacket, compared to the iPhone X which holds focus on the face and softens everything else. Cropping in, the Note 8's image looks a bit more detailed.

The Note 8's blur effect is stronger than on the X, which makes for a seemingly better photo.

In low-light scenarios the Note 8 looks a bit over-saturated, but it actually has less noise on the hoodie compared to the X. The rocks in the background are more detailed as well. Cropping in, we can tell that the Note 8's image is sharper, and the X looks soft and the detail is a bit smeared.

With the wide lens, the iPhone X's image looks a bit overexposed and a tad bit blurry. Cropping in, we can tell that the Note 8 is more sharp, and the letters on the hoodie are blown out on the iPhone X.

Finally, we turned on flash to see which photo is more pleasant. The image from the Note 8 is distractingly yellow and completely misses the mark in terms of accuracy. The iPhone X is much more accurate, and it does a better job of balancing the brightness of the background and foreground. Cropping in, we do see more detail in the Note 8's image, with the iPhone X's detail looking a bit smeared.

In conclusion, the Note 8's photos are just as sharp or sharper than the iPhone X in various situations, but it over-saturates colors and has a tendency to lack contrast. The iPhone X does a better job at high dynamic range photos, but detail can get more smeared when in low light than on the Note 8. Interestingly, the blur effect on the Note 8 looks just as good as the iPhone X, if not better, thanks to the bokeh ball effect and stronger blur intensity.