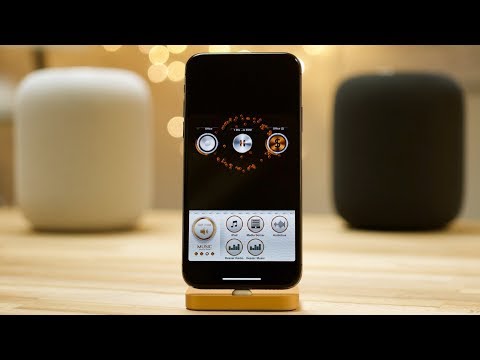 The three methods we'll be discussing use Apple's iTunes or the Airfoil Mac app, or the WHAALE app on iOS. Each relies on the first version of Apple's AirPlay, so AirPlay 2 will deliver a much smoother experience, but these stopgaps get the job done.

Once you have your two HomePods set up and connected to the same Wi-Fi network, head over to your Mac and open iTunes.

You'll see the AirPlay button near the top of the screen, to the right of volume controls. Just click it, and you should see both HomePods in the list. Check the box for each HomePod, and start playing some music.

You can adjust the volume of each HomePod separately, or use the master slider.

Unfortunately, with this method, you're limited to the Apple ecosystem.

If iTunes isn't your thing, there's a Mac app called Airfoil that can stream your Mac's system audio to multiple AirPlay speakers, including two HomePods.

Once you've installed Airfoil, click "Source" at the top of the app and you'll see all of the possible sources you can use to stream audio to your HomePod.

Some recent applications will show up, but you can also click "Select Application" to choose Spotify, Safari or any other app that outputs audio.

You can even AirPlay audio from your Mac's audio devices, like an internal microphone, or external equipment.

We're going to choose System Audio as our source so AirFoil will stream everything that's playing on Mac.

You'll get a prompt to install the Instant On extra. After doing so, choose system audio again.

Now just click the Audio button next to each HomePod, and it should start streaming whatever audio you have playing.

You can now play any song or video you want from YouTube or Facebook -- literally anything on your Mac.

However, be aware that there's going to be some serious audio syncing issues if you're trying to watch a video.

You can try to adjust the sync settings by heading to the "Advanced Speaker" Options by clicking on the "Speakers" menu at the top of the screen.

These issues should, of course, disappear when AirPlay 2 is released.

The Airfoil app also has an "Effects" menu, where you can adjust the master volume, change the balance of the sound, and adjust the equalizer.

Interestingly, you can push your HomePods to higher volumes than possible with Apple software, but we don't recommend it, as it's possible to damage your speakers.

Airfoil also comes with its own "Satellite" app, which allows you to output audio from your iPhone to your Mac, and then stream that audio source to your HomePods.

To try it out, just start playing some audio from any iOS app that supports AirPlay, like YouTube or Spotify, and choose your Mac as the output.

Your HomePods should instantly start playing audio from your iPhone.

Airfoil offers a free trial, but will introduce noise into the signal once it runs out. You then have the option of purchasing a license for $29.

For users who don't own a Mac, but would like to stream audio to two HomePods, there's an app called WHAALE Multiroom Player. The full version costs $10, but the Lite version should work just fine if you want to test it out.

Upon startup, close the Help menu, and swipe over to the speaker menu. Then drag both HomePods to the stage and tap the audio button.

Make sure both speakers have the checkmark next them and you should be ready to stream music to your HomePods.

Now swipe over to the list of audio sources and choose one. For your iPhone's Music Library, just tap iPod. You'll see all of your Albums, playlists, songs and podcasts. Tap to add, and you can start listening.

Back at the Main menu, you'll get a visual representation of your iPhone streaming to your HomePods.

Of course these solutions aren't perfect, but it helps make good use out of your second HomePod while you wait for Apple to release Airplay 2.

It can also give you a good idea of how two HomePods will sound once AirPlay 2 is released, although they won't be able to detect each other work together to bring you an optimal stereo listening experience, as Apple has promised.