AppleInsider
Posted: February 28, 2018 7:18PM
in iPod + iTunes + AppleTV edited March 2018
Over the last nine months, Apple announced HomePod, provided early demonstrations of its sound, briefed journalists on its design and intent, released the product to the market and followed up with additional details highlighting its capabilities that many early reviews didn't catch on their own. Here's an in-depth look at what makes HomePod not just an interesting product, but new product category with the ability to change how users experience audio at home. 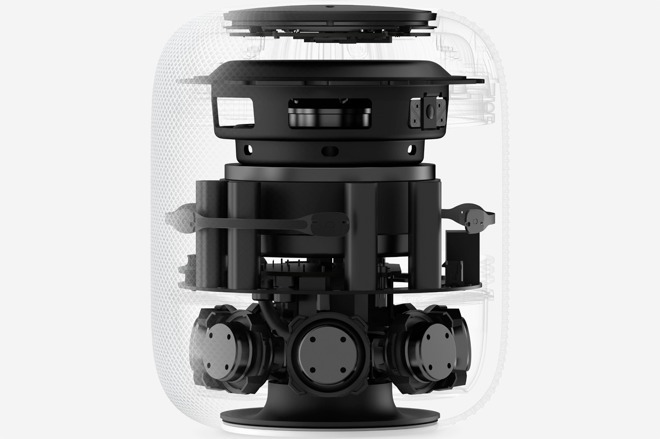 HomePod is tuned for powerful and sophisticated sound

Apple's engineers emphasize that HomePod is an effortless way to play back immersive audio. You simply plug it in and turn it on, and the system configures itself by analyzing its location and how its sound reflects off nearby walls. It focuses directional sounds toward the room, creating an expansive sweet spot of stereo imaging while directing ambient sounds to reflect off walls. This sophisticated audio processing is handled by its Apple-designed A8 processor, the same chip used to power iPhone 6, Apple TV 4 and the latest iPad mini 4

While playing audio from any source, HomePod continues to actively process sound playback and dynamically shapes it to fill the room, using sophisticated speaker management that hasn't previously been delivered in affordable home speakers.

There's no need to adjust EQ settings; the product is designed to play great sounding music, movie audio and voice content without futzing with controls.

This sophisticated audio processing is handled by its Apple-designed A8 processor, the same chip used to power iPhone 6, Apple TV 4 and the latest iPad mini 4. Without needing to drive a conventional display, the A8 chip can be fully exploited to actively manage audio reproduction across its seven directional speakers and a high excursion woofer and handle voice commands from its beam-forming array of six microphones.

Differences from simple speakers focused on a voice service

Apple has already produced and sold tens of millions of its custom A8 chips, driving down its unit price via economies of scale. Amazon and Google have to buy commodity, off the shelf processors from Texas Instruments, MediaTek, Intel Atom or other chip makers, driving up their component costs without matching the processing power or customized, optimized sophistication of Apple's onboard hardware.

Amazon's most expensive Echo Plus has just two smaller speakers that point downward. It lacks any real computational power because it doesn't even manage multiple speakers playing in stereo. Google's Home Max has four conventional speakers, but it's powered by an ARM Cortex A53, on the level of a Raspberry Pi 3. Neither device performs any active beam-forming management of speaker outputs; both also direct their speakers in a single direction.

At the same time, Amazon and Google are not selling large numbers of their higher-end voice speakers; they're increasingly working to distribute simpler, cheaper WiFi microphones that are focused on listening for marketable data, not reproducing captivating, high-quality sound. While there are ways to hook Alexa devices up to better-sounding speakers, that is not what's driving the impulse sales volumes of $50 WiFi mics: it's the novelty of voice requests that is.

Beyond these low-end, loss-leader WiFi microphone sales, their more expensive devices (Google's Max is priced higher than HomePod) are not only no match for the technical sophistication built into HomePod, but have scant chance of finding any real volumes of sales, because the value of their voice services can be delivered in a much cheaper package; Amazon and Google are effectively disrupting their own higher-end sales of voice speakers with their low end, super cheap WiFi microphones.

Again, the value of Amazon's Alexa and Google Assistant-based products is focused on their voice services, not their audio performance in hardware. If that sounds familiar, it's because that mindset is also what has driven Android: low-cost, stripped down hardware striving to support a platform intended to fuel Google services (or Amazon's, in the case of its FireOS branch of Android code).

Android's nearly decade-long history on phones and tablets provides a warning example of how well these voice platforms can expect to perform on a long-term basis being tied to low-end commodity hardware in direct competition with premium hardware from Apple.

Cheap phones, low-end tablets and discount watches have all repeatedly failed in the face of premium iPhones, iPads and Apple Watch, regardless of how sure pundits were that cheap commodity would someday be the real winner.

Over the last year Google has been unable to even sell commercially relevant numbers of its Pixel phones despite incessant marketing and the staunch endorsements of Android bloggers. Yet in just the last quarter, Apple sold remarkable numbers of its new iPhone X, with a higher price tag than any previous iPhone, because it delivered captivating new technology that impressed and delighted buyers.

Another major difference between Apple's HomePod and the growing variety of Alexa or Assistant-based hardware is consistency. Similar to its iPhone offerings, Apple has a mass market product with a unified set of characteristics.

Amazon and Google are promoting Android-like voice ecosystems that span a wide range of different devices, mostly made up of their cheapest, least capable and least upgradable options.

Apple is laying the foundation for a sophisticated speaker unit that can not only be significantly updated in software but also creates an installed base of hardware that doesn't suffer from fragmentation. Because all HomePods work the same, music, video and app content can be created to take the fullest advantage of the immersive audio capabilities of HomePod hardware.

The "Now Playing" iOS interface already lets users view and control different HomePod, Apple TV or other AirPlay devices in their home. A user can already stop HomePod from streaming directly from Apple Music to AirPlay content on their iPhone (from an app such as YouTube or Spotify), as shown below.

In the future, apps that support AirPlay 2 and the Now Playing interface of iOS 11 will be able to send streams to multiple AirPlay 2 speakers in different rooms the way iTunes on a Mac already can.

AirPlay 2 will also feature much larger content buffers, using faster-than-realtime delivery to supply the speaker with minutes of upcoming audio, rather than a few seconds. This will allow HomePod (and other AirPlay 2 speakers, including Apple TV 4K) to continue smooth playback even when streaming from your phone, which might momentarily lose service as you walk around or step outside.

These enhancements to AirPlay wireless delivery will ensure that audio is tightly synched and far less prone to the temporary dropouts that can be a problem for Bluetooth audio. There's also another advantage AirPlay 2 has over simple Bluetooth speakers: it can be deeply integrated with HomeKit (as is described in greater detail in the following segment). 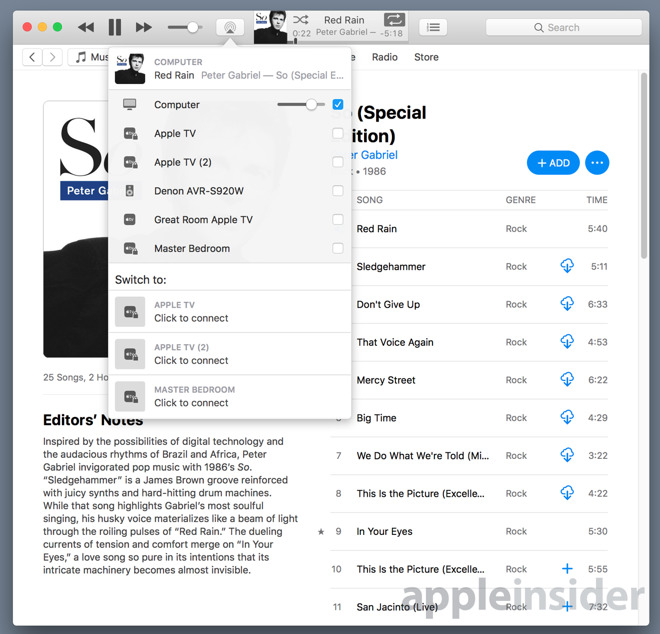 HomePod isn't a Bluetooth speaker. A primary reason: Apple effectively owns the market for premium mobile devices. There isn't much potential demand for non-AirPlay devices (Android phones) to play content to a high-quality speaker from Apple. Bluetooth would only deliver a lower quality streaming experience, detracting value from HomePod rather than making it a better product.

Apple already offers Bluetooth speakers under its Beats brand, optimized for mobile playback from a compact, battery powered unit. If Apple saw value in adding basic voice control to its existing Beats Pill, it could have done that years ago. Instead, as noted above, it focused on sophisticated processing and high-quality home audio playback with HomeKit integration. 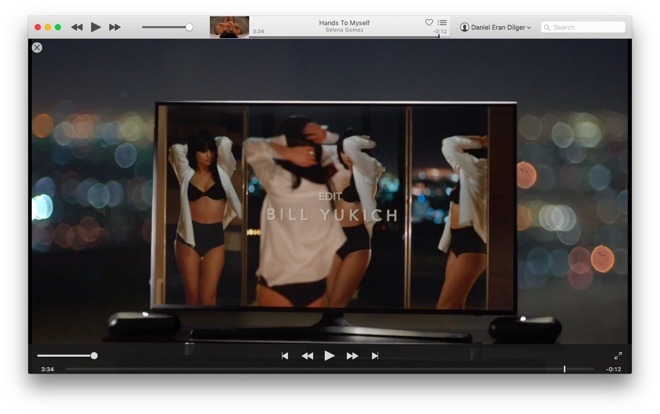 
Consider that Apple first sold its iPods almost exclusively to Mac users (using Firewire) across its first two generations. In 2003, Apple introduced iPod 3 with support for USB, making it broadly compatible with Windows PCs. At that time, the installed base of PCs globally was only around 750 million. Apple already has a larger installed base of iOS and Mac users than that today. Being limited to AirPlay-capable iOS devices is not really a limitation.

The value of HomePod in attracting some Android users to iOS is higher than the potential for any sales of HomePod to Android users who'd need to use Bluetooth or a cable to work with it, and who would get no value from its HomeKit and iCloud app features. Don't expect Apple to water down HomePod in an attempt to attract Android users. That's the market served by Beats Pill and other Bluetooth speakers from a variety of third-party manufacturers.

Alongside AirPlay 2, Apple will deliver support for using two HomePods in tandem in the same room. This has been referred to as "stereo," as if HomePod is currently a mono audio source like an Amazon Echo. That's incorrect.

Stereo is commonly thought to relate to two speakers, but the concept of stereophonic audio really means that we listen with two ears and our brains calculate a sound stage mental map of the direction those sounds appear to be coming from. The simplest form of stereo audio reproduction uses two different speaker channels to send slightly different signals to each of our ears.

HomePod already uses a series of seven directional tweeters to create an immersive, stereophonic soundscape. By pairing two units together, you will be able to greatly expand upon this separation and placement of apparent sound sources.

Having listened to a pre-release demonstration of two HomePods in action, I can describe that one HomePod by itself delivers incredibly wide sound from a single unit, but two playing in concert can create a virtual stage where you feel like you can close your eyes and point to specific instruments and singers during the playback of a performance. It's really impressive technology, and far beyond simple "stereo playback."

The computationally intensive work required to image such a virtual soundstage requires a powerful processor like the A8. But the fact that Apple will be selling millions of HomePods also means there will be an installed base of precise, accurate speakers capable of reproducing complex audio experiences.

This could include specially mastered live performances of live bands or orchestras, as well as immersive synthetic experiences related to VR, video games, movies, TV or other app content designed to surround the user in audio.

It would be impossible to cobble a similar platform out of the terrible speakers built into existing Echo and Dot appliances, and neither Amazon, Google, Samsung, Spotify or other speaker makers really have to clout to produce such a sophisticated, premium speaker and sell it to a critical mass of users globally.

Consider how badly everyone outside of Apple--HTC, LG, Essential, Google's Pixel--is at the business of building and selling premium smartphones, which should be an easy sale of an in-demand product.

Last summer at WWDC17, in parallel to introducing HomePod, Apple addressed new support for producing audio using "higher-order ambisonics" for delivering fully spherical surround sound, transmitted in a speaker-independent format. You might think of this as a soundscape delivered in a computationally rendered format similar to PostScript, rather than as a resolution-dependent "raster image" using speaker-specific signals.

HomePod appears to be an ideal product for consistently reproducing such sophisticated sound content, without requiring complex setup or inflexible speaker arrangements.

An audio computer for the home

You can think of HomePod as Apple's first audio computer, designed to work without needing a display, and presenting an interface that's almost entirely sound. From that perspective, it's not enough to just describe it as having "improved sound" over competing voice appliances that are mostly focused on hearing you and collecting your orders and search requests.

Beyond its ability to wirelessly stream high-quality music and sound from Apple Music and from AirPlay apps, HomePod also integrates into Apple's home automation platform, as the following segment, How HomePod serves as a hub for Siri HomeKit automation and entertainment, examines.