In an unusual move, Apple previewed iOS 11.3 at the same time as providing it to developers in beta back in January, with a view to a spring release.Six beta editions have been released in the months since.

Apple has already released iOS 11.3, but only for the recently-launched sixth-generation iPad, with other iPhones and iPads believed to get the update in the following days.

Now, the new operating system is available to the public for older devices. The release itself is largely in line with what was detailed by Apple in January. 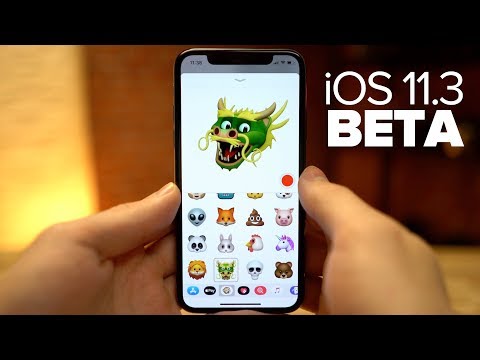 The iOS 11.3 shows new transparency about battery health on the iPhone, including recommending whether an iPhone's battery needs servicing, as well as whether the power management feature is on. We got our first look at those settings back in February, which included such features as Maximum Capacity percentage and Peak Performance Capability.

The battery health feature, released in beta, is introduced in response to the ongoing battery throttling controversy, in which iOS would purposefully reduce the processing performance of an iPhone if the battery has degraded too far.

For iPad users, the included "charge management" is intended to maintain battery health when an iPad is connected to power for prolonged periods of time, such as in kiosks, point of sale systems, and stored in charging carts.

The iOS 11.3 release includes the new Health Records feature, which builds on the existing Health app to include encrypted and password-protected medical data, from across multiple providers. In late January, 12 major healthcare providers announced their support for the Health Records feature. It will also allow health providers to share records with each other.

The new release features ARKit 1.5, which builds on the original ARKit in order to make certain actions possible, such as integrating real world images into AR experiences and placing virtual objects on vertical surfaces. For example, movie posters and signs can be made to trigger AR animations viewable through an iPhone or iPad.

"The pass-through camera view of the real world," Apple says, "is higher resolution and supports auto-focus for a sharper view in more situations." It is said that the resolution supported by ARKit 1.5 will be 50 percent greater than in the original release.

Apple Music now includes music videos as they are released by Apple, including ad-free streaming and the ability to create playlists. Both old and new videos are featured, with Apple-curated playlists available by genre.

Originally intended as part of iOS 11.3, it was released early as an app update on Thursday.

Apple also added the option of finding friends with similar tastes in music, with updated suggestions that reveal genres people enjoy and identifying mutual friends who like that style of song.

The new iOS Advanced Mobile Location now automatically sends a user's mobile location during calls to emergency services. This change is expected to encourage more municipal governments to sign their first responders up for the service.

First discussed at the 2017 WWDC, Apple has enabled HomeKit Authentication. After the update, HomeKit peripherals connecting to an iOS 11.3 or tvOS 11.3 device can use software for encryption rather than a dedicated chip on board a peripheral.

This should enable HomeKit on some older accessories through a simple firmware update, though in practice the processor demands of Apple's encryption may limit upgrades.

As discussed by Eddy Cue in his South by Southwest interview, Apple News will be improved, with a better Top Stories section and a video feature called "For You."

It is now possible to sort customer reviews on product pages by the most helpful, most favorable, most critical, or most recent. The information about changes to apps in the Update tab has been improved with regards to the app version and file size shown to users.

The new release features a quartet of new Animoji- a dragon, a bear, a lion, and a skull - which can be used to message others as well as for the production of Animoji karaoke videos.

One feature expected to arrive in iOS 11.3 but hasn't is AirPlay 2, an upgraded version of the existing AirPlay communications protocol for streaming audio. The main improvement is support for streaming audio to multiple devices simultaneously, such as HomePods and Apple TVs, as well as incorporating AirPlay 2-supporting speakers into HomeKit.

The standard was in the first two 11.3 betas, but subsequently disappeared for reasons unknown.
«123»