AppleInsider
Posted: June 12, 2018 7:00AM
in iPhone edited June 2018
Nomad's popular Battery Cable, which integrates a battery pack into a Lightning-enabled charging cable, has received a significant upgrade, with the second-generation version enhanced by a more robust exterior, higher capacity battery and other changes.

Keeping iPhone charged on the go can seem like an insurmountable task. Power users are likely familiar with the assortment of power adapters, batteries and cables that need to be toted along as everyday carry, and each accessory seems to have its own set of problems.

Enter the Nomad Battery Cable. The combination cable and battery pack not only cuts down on excess luggage, but simplifies the charging process. It's a must-have when we head out of the office. 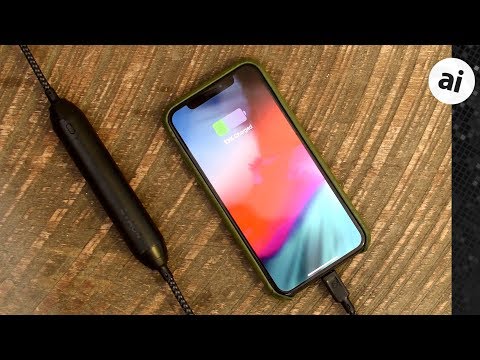 Using the Nomad is dead-simple. Just plug it in and use it as a typical Lightning charging cable. With an iPhone is attached and the cable is plugged in to a USB outlet, the phone will charge first, then the in-line battery. When you head out, unplug the cable from the wall and the built-in battery will be charged up, ready to go. No more worrying about whether your portable battery pack has juice.

In addition to the battery, Nomad includes a number of other, equally smart design decisions. Super-strong nylon envelops the cable's length, preventing tangling and protecting the reinforced interior. Nomad says they flex tested this cable up to 10,000 times before it failed.

Battery Cable comes in at a lengthy 1.5 meters, but a handy silicone cable tie keeps it organized.

Version two of this capable cable is even more useful with four changes -- two big and two small.

Battery capacity has increased from 2,350 mAh to 2,800 mAh, which is enough to fully charge an iPhone X. That is roughly a 20 percent increase in battery size, without increasing the physical dimensions of the battery enclosure.

That enclosure is now inside an aluminum tube instead of the plastic body that covered the first version. Aluminum not only looks and feels better, but it should offer increased durability as well.

A few other small changes include a slightly thinner cable with a darker nylon color. The custom cable tie has been relocated from the short half near the USB-A end to the longer side that has the Lightning connector. This should make it a bit easier to wrap up the cable when only a portion is needed.

Having an always-charged battery built into a super-strong Lightning cable can be an indispensable tool for iPhone owners constantly seeking an outlet to top off their device. Nomad's solution is compact in size, lightweight and has come in handy more times than we can count. It is able to provide adequate backup power before we know we need it, and now it can handle our iPhone X.

The upgraded V2 Battery Cable is available to order now from Nomad's website for $49.95, the same price as the original.

Nomad has a pile of other Lightning cables as well including powerful 100W USB-C cables, universal cables, and rugged weatherproof models.