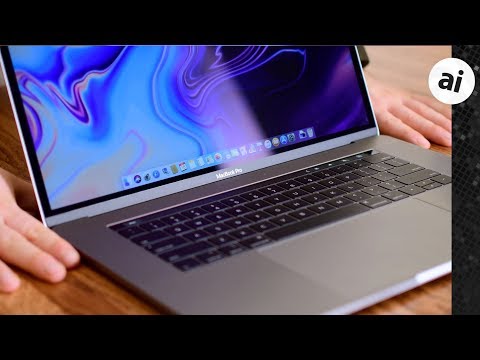 We noticed a difference right away when started typing on Apple's new third-generation butterfly keyboard. It retains the tactile feel and bounciness we've come to expect from their slim chiclet style typing surfaces, but there is a clear drop in the audio produced.

Apple claims the biggest difference is how much quieter it is, and was one of the largest customer complaints. We type on the last generation keyboard daily, and they certainly are loud. However, we aren't so sure that is the change this time around.

Under each keycap, is a new silicone membrane, first found by iFixit in their usual teardown. This new seal will help stop the ingress of debris into the sensitive butterfly switch mechanism. That barrier also appears to dampen the audio, making the "quieter" aspect, more of a secondary benefit.

With this new seal, these upgraded keyboards should be more reliable, lasting longer than before.

Even the base model 15-inch pro has the six-core 2.2GHz i7 Intel processor.

All of the new models are showing huge improvements in performance over last generation, especially when it comes to the multi-core benchmarks.

These are the first Macs to take advantage of the new Bluetooth 5 spec, which shows some huge improvements over Bluetooth 4.2.

Bluetooth 5 is able to sacrifice data rate for longer range in low-energy transmissions. A lot longer range. In fact, it can be a maximum of 800 feet, though that is a theoretical maximum in a perfect environment. Real world usage will be lower, but still much more impressive.

Additionally, it can power consumption for extra bandwidth. It can actually double the bandwidth, now up to 2Mbps.

That means Bluetooth can now go over super long distances with less bandwidth or do twice the data in a shorter range.

Of course, you need new hardware to take advantage of this, but we've seen many already starting to hit the market.

MacBook Pro's speakers are no slouch. In the 2018 model, they've been upgraded again.

Now with a fuller, more developed sound, with noticable improvements in the lower and mid range. They still won't replace a set of dedicated bookshelf speakers, but for most listening, it will be an asset.

On the 15-inch MacBook Pros, the base amount of VRAM has been upgraded.

Video editors and others will rejoice that now 4GB of VRAM is standard, instead of requiring the extra few hundred dollars as was expected in the past. It may seem like a small thing, but it makes a big difference for professionals.

Since we are on the topic of RAM, the maximum capacity for RAM has been increased to allow up to the 32GB rather than 16GB.

They also use DDR4 instead of LPDDR3. DDR4 faster, but it is no longer "low power", so it will eat up a bit more battery life.

Apple does compensate for that with an increase in overall battery capacity. This shouldn't yield any increase in actual usage time between charges, but it is something we will explore in our reviews to find out for sure.

Powering a variety of system functions, including the Touch ID sensor, is Apple's newer T2 chip. This custom chip does many things, and one of them, is allowing for "Hey, Siri" support.

This is a first for Mac, which previously required a keystroke to enable.

Among all the other changes coming to macOS Mojave, Siri will be even more useful, adding support for HomeKit.

True Tone is Apple's display software technology that utilizes two ambient light sensors embedded within the display of MacBook Pro to change the temperature (or white balance) of the display to match the environment it is in.

It works not only with the built-in display, but select other displays such as the LG Ultra Fine 4K and 5K monitors, though it does require the lid to be open.

We've been fans of True Tone for years, back when it first launched with the 9.7-inch iPad Pro. When you stare at your computer monitor all day, it can make a big difference on the eyes.

On the previous generation 13-inch MacBook Pro, it delivered PCI Express bandwidth, and thereby lower throughput, to two of its four ports. Specifically, the two ports on the right-hand side offered full Thunderbolt 3 capabilities, but lower speeds.

Now that the 2018 13-inch MacBook Pros with Touch Bar have quad-core processors, the CPU has more lanes and thus supports more bandwidth, allowing all four Thunderbolt 3 ports to be full speed.

Pros will rejoice about this, especially those looking for a more compact solution without sacrificing speeds.

Apple authorized reseller Adorama is currently offering AI readers $50 off Apple's 2018 15-inch MacBook Pro with Touch Bar with coupon code APINSIDER (see the activation instructions below). Shipping is also free, and Adorama will not collect sales tax on orders shipped outside New York and New Jersey. For many shoppers, this can equate to an additional $190 to $535 in savings on top of the coupon discount.

These are the exact same systems carried by the Apple Store and include Apple's standard 1-year limited warranty, just with additional savings. Select models are shipping now, while upgraded configurations are expected to ship out within one to two weeks.

Instructions:
To activate the discount, you must use this shopping link and enter coupon code APINSIDER during checkout in the same browsing session (look for a link that says "Do you have a gift card or promo code?" next to the gift icon and click that to bring up a coupon code field). Need help? Send us a note at [email protected] and we will do our best to assist.