AppleInsider
Posted: September 26, 2018 2:55PM
in iPhone edited September 2019
About two weeks ago, AppleInsider compared the iPhone X to the Samsung Galaxy Note 9 while playing Fortnite, but some complained putting a just-released phone against last year's model. With the release of the iPhone XS and XS Max, is there as much of a difference between the flagship models of both companies as last time? 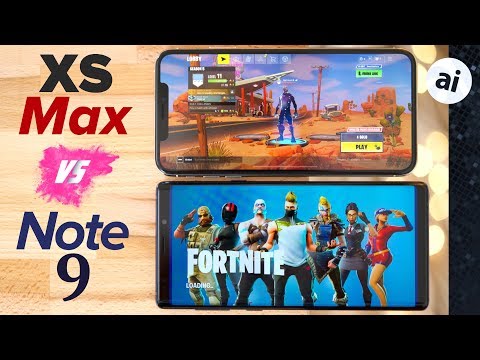 Before playing Fortnite, the iPhone XS Max was charged to maximum battery capacity, and brightness was set to 100 percent as well, with auto-brightness disabled. Do Not Disturb is on, Bluetooth is off, and there's no apps open in the background that could influence the result.

An obviously change from the last comparison is the screen, which is absolutely huge compared to the iPhone X and XS. It's hard to appreciate it without getting hold of an iPhone XS Max and actually using the device. Coming from the iPhone 8 Plus, this screen is so much larger and much more immersive. It's pretty hard to explain just how different it is. 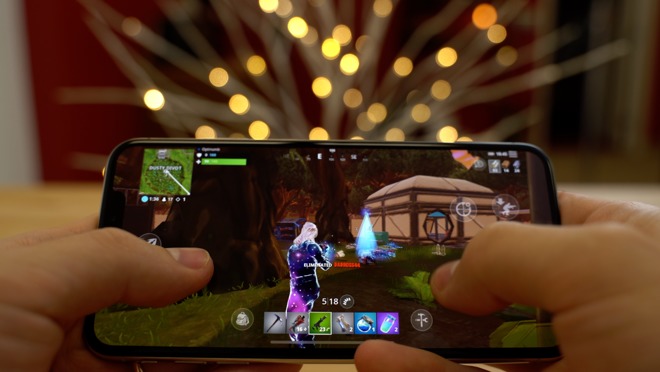 One thing I instantly noticed is that the speakers sound so clear and crisp. It's almost like you can hear everyone around you and know precisely where they're at. 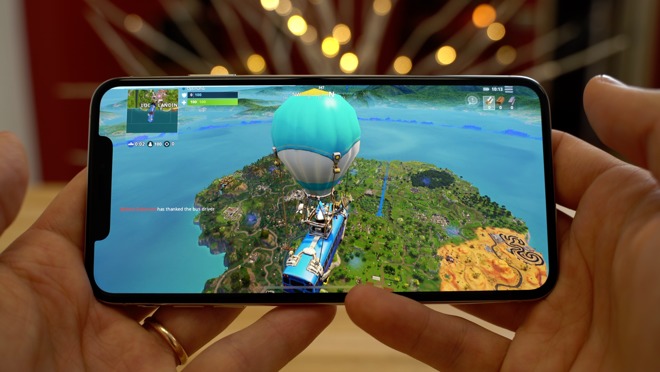 Gameplay is surprisingly smooth and, even while playing on a mobile device, it's actually a great gaming experience, with no dropped frames and minimal lag. The UI and controls are very easy to use due to the larger screen, much easier on than on the iPhone X which had a pretty cramped UI, causing me to sometimes accidentally press buttons.

Another difference is the notch seems smaller when compared to the massive screen size, so it doesn't get in your way nearly as much as the iPhone X and XS notches. 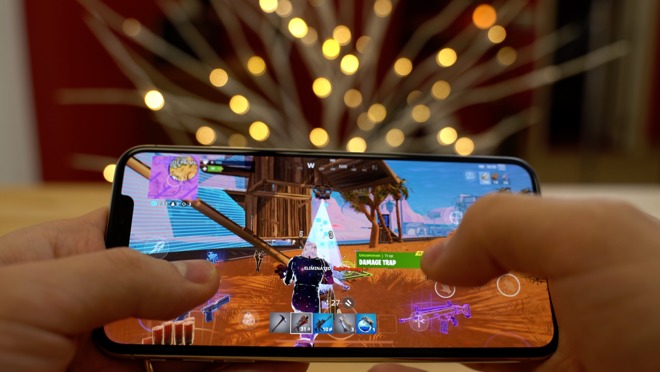 After around 45 minutes of gameplay, the iPhone XS Max ended with 87 percent battery life, pretty impressive for running at 100 percent brightness for that long. Throughout the whole gaming session, I did not notice any dropped frames at all on the iPhone XS.

This is probably the best mobile gaming experience you can get. 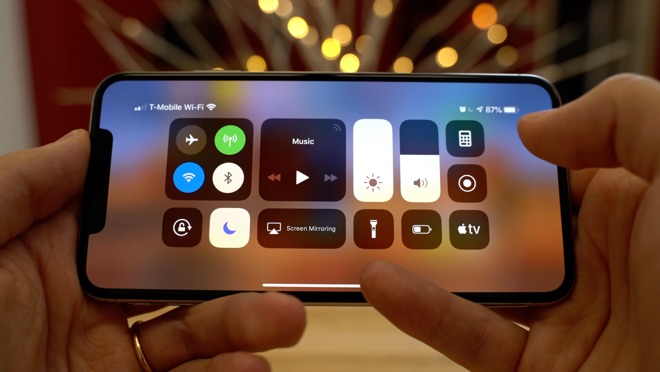 The story is the same on the Note 9, starting with a full battery, maximum brightness, and auto-brightness off. Again, there are no background apps open, and Bluetooth is off.

One thing that's interesting is that the Note 9's display is actually technically smaller, measuring 6.4 inches compared to 6.5 inches on the iPhone XS Max. However, the notch isn't counted in the measurements, so technically the Note 9 has more screen real estate. 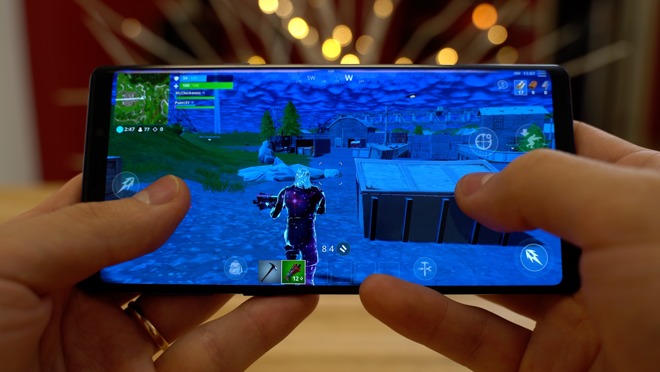 The Note 9's speakers are quite a bit quieter than the iPhone XS Max, sounding a bit dull and flat. The speakers on the XS Max sound so loud, crisp, and clear, the Note 9 just doesn't compare.

Getting off the bus for the first time, we instantly noticed some dropped frames, whereas the iPhone XS Max didn't experience any. The screen also looks quite a bit blue, and that's probably due to the fact that the iPhone XS Max has True Tone technology, which adjusts for ambient light to make the display look paper white, all the time.

During gameplay, we saw even more dropped frames. The Wi-Fi connection is exactly the same, so it's not due to internet connectivity. It's probably because the Note 9's processor and GPU just don't perform as well as the XS Max's new A12 Bionic chip. 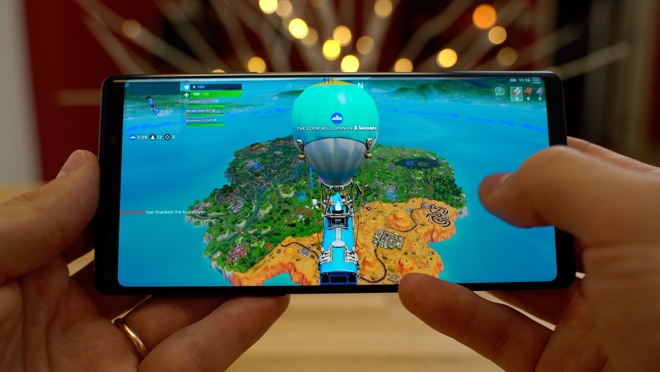 While playing, I found myself trying to turn up the speakers louder, but they were already completely maxed out. I also noticed that the iPhone XS Max's display seems to be a little bit brighter than the Note 9.

After around 45 minutes of total playtime on the Note 9, the battery was at 83 percent. A little bit lower than the iPhone XS Max, but still very similar in battery life. 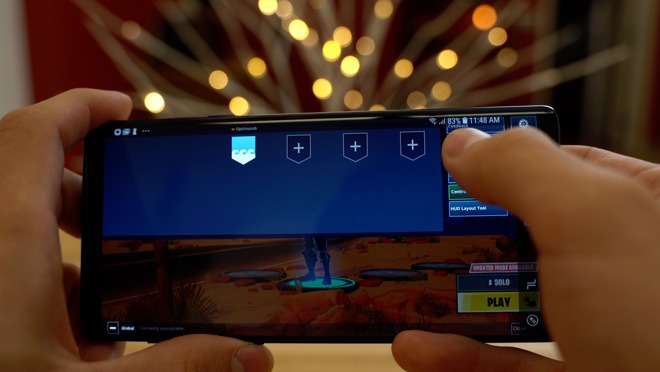 We then turned on screen recording on the Note 9 to see how well it would perform. After a match, it seemed to play fairly fine, but we still experienced dropped frames.

We did the same on the iPhone XS Max and gameplay was just as smooth as before, however, we ran into a small issue.

While recording, the volume dropped significantly, so low that it was hard to hear the footsteps of nearby players. We're not sure if this is a bug that'll get fixed soon, but it was definitely bothersome.

Which phone is better for Fortnite gaming?

After a couple of long gaming sessions on both the iPhone XS Max and Galaxy Note 9, here's our conclusion. 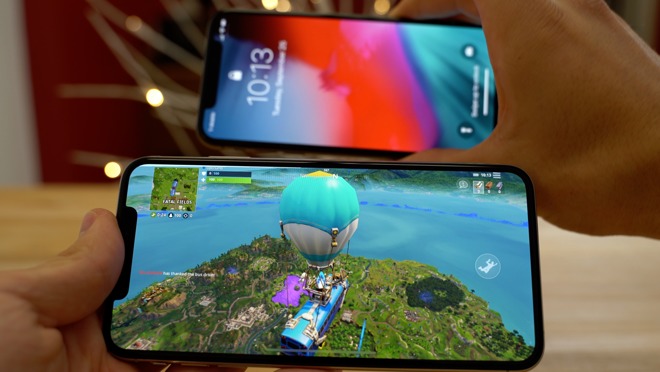 First off, I want to say that the massive display on the iPhone XS Max gives the most immersive gaming experience you can ever get on an iPhone.

However, the colors on the Note 9 are more saturated, which is nice if you prefer that. The iPhone XS Max's display seems more natural, while also very colorful. True Tone is definitely a plus in my book, since I can't stand when displays look obviously too blue when in a tungsten-lit room. 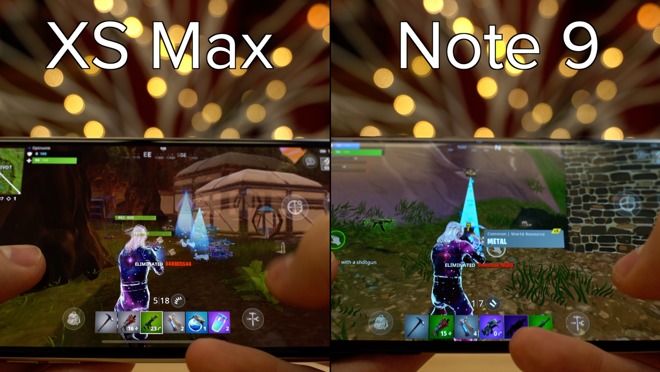 Performance-wise, the iPhone XS Max was basically perfect at all times. We didn't observe any dropped frames, so we're extremely impressed with it. The Note 9 experienced dropped frames various times throughout our gaming sessions, so the XS Max wins here for sure. 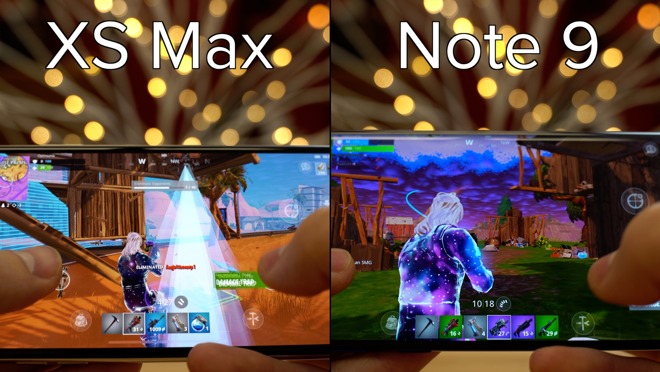 When we compared the iPhone X to the Note 9, it was a draw, despite the Note 9 being a newer device.

This time, we've got to give the win to the iPhone XS Max. It is definitely the phone to get if you want to play Fortnite, both for performance and the massive Super Retina display.
«12»