AppleInsider
Posted: October 17, 2018 4:20PM
in iPhone
Analysts and commentators who spent the first half of 2018 insisting that Apple's $999 iPhone X was suffering from "disappointing" sales because of its premium price, a supposed "lack of innovation," and controversial design choices that included a camera "notch" are now telling us that Chinese companies that struggled to profit from high volumes of cheap phones will now successfully sell expensive models with an imitative notch.

How the $1,000 phone jumped from unaffordable to "a bargain"

It seems like it's been a long time since Tripp Mickle of the Wall Street Journal and Mark Gurman of Bloomberg were taking turns parroting as often as possible those anonymous, fake reports from Nikkei that claimed sales of Apple's premium-priced iPhone X were 'disappointing,' 'weak,' and 'lackluster' specifically because of its high price, and maybe because of the notch as well.

According to the swinging pendulum of Flawgic whim, that can only mean that rising prices among Android makers will have the opposite effect! Low-priced Android may be hitting a wall, but look out for high-priced Androids, which bargain hunters will clamor for at any price.

Counterpoint Research analyst Peter Richardson just stated that Huawei's new Mate 20 X "looks like a bargain at 899 euro," the equivalent of $1,037. And we know Android buyers are looking for bargains!

That's not even the cheapest new Huawei flagship. "The Mate 20 starts at 799 euro," Richardson noted. That's $922, a significant premium over Apple's iPhone XR. However, the Mate 20 delivers a tiny notch so small it just looks like a bunch of dead pixels at the top of the screen. It skimps on notch size by not including any kind of depth sensor or Face ID equivalent. For that, you have to upgrade to the Mate 20 Pro (1,049 euro, or $1,210).

Huawei's Mate 20 has a sort-of notch without anything like TrueDepth, for $172 more than iPhone XR

In fact, Android buyers who have driven the average price they're willing to pay for a handset down to around $200 are suddenly going to be paying more than an iPhone for a copy of last year's iPhone, if analysts have correctly placed their finger on the pulse of the industry.

But what about competition?

It would be cruel to ask Google, which hasn't been able to sell its own premium Android tablets or phones, clearly in part because they are not that much different than other Androids selling for far less.

Without addressing this quandary specifically, Richardson notes that he doesn't see Huawei's latest high-end flagships as a threat to sales of iPhones, stating that "it has always been unlikely a hardened iOS user will give a Huawei phone a second glance."

Apple "needn't be concerned," he wrote, "but Samsung should be in full panic mode."

Samsung is actually already in full panic mode, with its latest Galaxy S9 flagship having sold poorly globally this year under the shadow of iPhone X-- Apple's "expensive handset" that wasn't supposed to sell well, despite being priced about the same as Samsung's fanciest offerings--the whole histrionic fit over an $999 iPhone was a phony invention from day one.

Unable to compete against Apple in the premium tier, Samsung has told its investors that it plans to refocus its efforts on middle tier smartphones. At the same time, Samsung is also getting a taste of its own medicine. Huawei's Mate Pro Pro liberally copies from Apple but also clones the wrap-around display Samsung used to differentiate its Galaxy models. Samsung is getting Samsunged by China.

But all is not well in China either. Huawei and ZTE were just blocked from government purchases in the U.S., and even outside of those issues, all of China's combined smartphone production is minimally profitable at all-- far less than even Samsung. But there are even bigger issues for phone makers in China.

Remember the "Peak iPhone" concept? That 2014 doomsday scenario was predicted to be the end of Apple's profitability, as a lack of unit growth in new iPhone sales could only compound iPhone's competitive threat from millions of cheap, serviceable smartphones being produced by Samsung, in China, and in other emerging markets such as India. Suddenly pundits had a plausible theory of how Apple would finally die in doom.

That didn't occur. Instead, Apple increased the value of its sales by investing in advanced new technologies from custom silicon to imaging depth sensors and advanced software from Augmented Reality to Core ML, building a new luxury class of iPhones that sustained volumes of upgrade cycles while raising Average Selling Prices, contributing to higher revenues and increased profitability.

In concert, Apple also continued to build out its Services business to capitalize on the value of its vast, premium-tier installed base and created new classes of wearable peripherals from Apple Watch to AirPods. Today, even without material growth in its iPhone unit sales, Apple is now more profitable and now even harder for lower-tier rivals to compete against at any price.

Following the history of PCs and tablets, global unit sales of smartphones are now shrinking. How will volume producers stay afloat? Over the past four years, columnists have excitedly reported how various Chinese Android licensees have taken turns "beating Apple" in sales volumes, at least before fading into profitless failure. Following Xiaomi, it was Oppo in 2016. This year it's Huawei.

Yet across all that time, all the collective production in China-- plus Samsung-- still trailed far behind Apple's profitability in 2014, 2015, 2016, 2017, and this year. With opportunities for huge growth in volume sales reaching the end of the runway, how will Chinese companies compete with Apple in the future? According to analysts: by raising their prices like Apple while continuing to copy Apple's designs.

As the smartphone industry continues to shrink, the logic of hailing low-profit, high volume smartphone mega-producers as the future just continues to look inane. If cheap iPhone-knockoffs weren't making money at the peak of the smartphone demand, they're going to be performing really poorly as the market matures and demand begins to shrink. The littered corpses of cheap PC and tablet producers provide plenty of evidence of this.

At some point, companies producing vast numbers of low-end smartphones will either need to build the Apple-like services business that Xiaomi claimed to be aiming at before it failed miserably and pivoted into household appliances, or they'll have to copy Apple's other strategy of building higher-end, premium products that can remain profitable even in markets where volumes have tapered off.

The problem is, analysts and pundits have claimed for years that Apple was wrong, and that the only way the company could survive 2014 was by developing an iPhone that could be sold for less than $300. Instead, Apple went premium with iPhone 6 Pro, then iPad Pro, then high end MacBook Pros, then iMac Pro, then in wearables and with HomePod and Apple TV 4K.

Since 2014, Apple has earned more money than all of China's production put together. That's important because those years were a furious growth spurt for smartphones. That era of expanding volume growth is now over, making it pretty clear that speculative production of tens of millions of low-end devices will be even less profitable than it was during the period when around half of the smartphone producers in China were forced out of business because they couldn't stay afloat.

After begrudgingly admitting without liability that their incessant "iPhone X is unaffordable" logic was completely worthless and totally wrong, analysts are now claiming that Apple simply pioneered the way to higher prices for everyone, and that companies that couldn't turn a profit making high volumes of low and middle-tier devices now had permission to sell iPhone-knockoffs at iPhone prices, and that this would naturally make them as profitable as Apple. Why hasn't Samsung been able to sell premium phones at iPhone prices and at Apple-level profitability, despite trying desperately to do this since 2011?

The obvious question: why hasn't Samsung been able to sell premium phones at iPhone prices and at Apple-level profitability, despite trying desperately to do this since 2011-- seven years ago? Samsung builds its own components, had unfettered access to U.S. markets and had more experience in building handsets than Apple. It even offered expensive phones before Apple did.

Yet Samsung's Mobile unit sales are in a funk, its premium-priced Galaxy S9 is actually selling below expectations (according to Samsung itself, not merely its uninformed critics), and-- armed with everything it knows about the smartphone market-- it is now committing to pushing more sales of middle-tier phones, rather than hoping to sell more high-end, premium devices in competition with Apple. 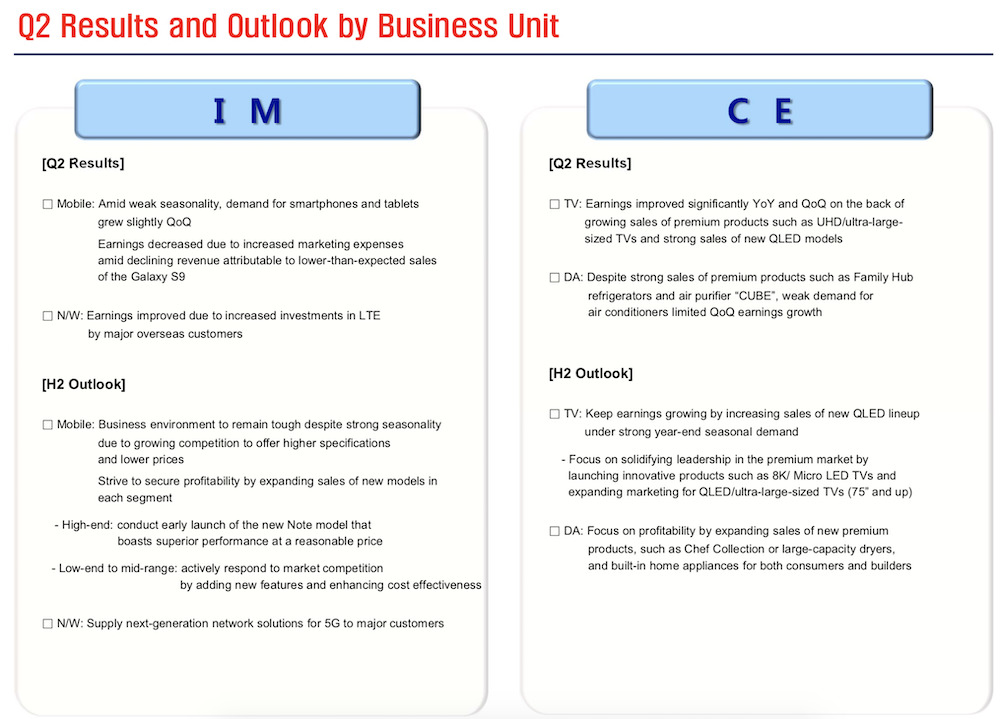 Following Apple seems so simple, but is so hard

Samsung is hardly the only example of a company that "should" be able to beat Apple at its own premium-priced game, but hasn't. Consider Microsoft, which has struggled over the last decade to build premium PC notebooks, high-end smartphones, enterprise tablets and an upscale retail chain, yet has clearly failed in every respect-- despite spending lavishly to rebrand and then acquire Nokia, then funding a string of billion-dollar marketing campaigns. Having tons of money doesn't necessarily result in competence.

Or consider Google, which very publicly made a radical shift from its initial strategy of shoveling out ultra-cheap phones and tablets like the Nexus 7 to a new Apple-like strategy of selling the very expensive, MacBook-priced Chromebook Pixel; iPad-priced Nexus 10; and three generations of iPhone-priced Pixel phones. These have all been absolute commercial flops.

Android apologists can claim that Google was merely spending billions of dollars to dramatically pantomime a theoretical way to successfully make money for the benefit of its Android licensees-- like one of those real estate speculation experts traveling to your town to show you how to get rich, rather than getting rich following his own advice-- but if Google's global brand and its expertise with Android and Chrome OS isn't enough to push out premium hardware, how will a bunch of failing licensees best known for bundling spyware on copycat hardware designs rival Apple?