AppleInsider
Posted: November 6, 2018 6:14PM
in General Discussion edited October 2020
The photo sharing service is cutting back on your storage options and it isn't doing it nicely. AppleInsider shows you how to get your images out of Flickr before the company starts removing them. 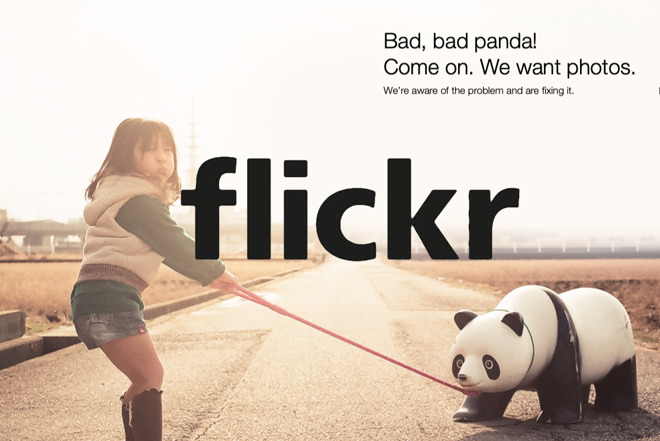 Editor's note: While this tip was first published in November, Flickr will start deleting user photos on February 5. If you haven't done so, and are on the free 1000-photo limit plan, and have more than that stored, now's the time to download your photos from the service.

You can't blame a company for having to make changes and especially not when it's been giving everyone a terabyte of free storage. You can, though, blame Flickr for how it's managing this change. If you're the sort to leave things to the last minute, good luck working out when that is.

It's most likely to be January 8, 2019, which is officially when all free accounts will be limited to 1,000 photos and videos. If you are over that limit at that date, though, all you'll see at first is that you can no longer upload any more. Then starting from February 5, 2019, your images and videos will start to be deleted.

There's no clue how long that will take. Flickr just says the deletion will begin "from oldest to newest date uploaded" until you're down to the 1,000 limit.

The company does also say that users who are currently over this new 1,000-limit tend to be ones who are solely storing instead of sharing images. 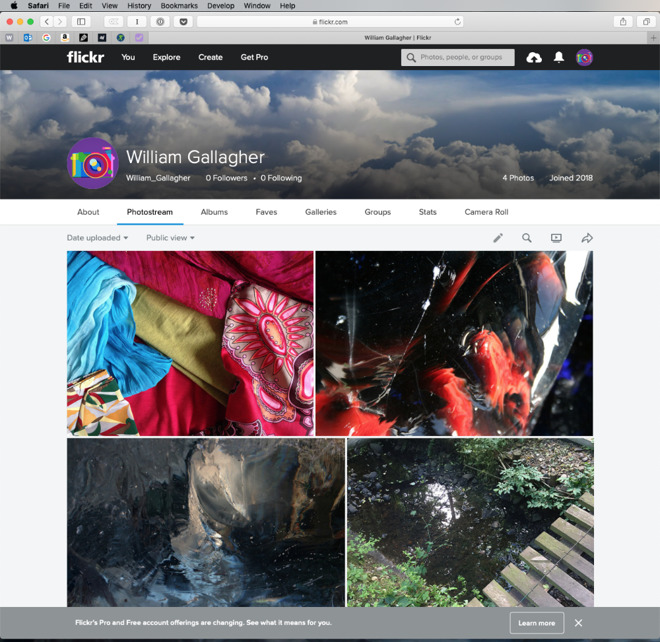 "The free terabyte largely attracted members who were drawn by the free storage, not by engagement with other lovers of photography," said Flickr Vice President of Product, Andrew Stadlen in an announcement. "This caused a significant tonal shift in our platform, away from the community interaction and exploration of shared interests that makes Flickr the best shared home for photographers in the world."

If you're into Flickr for work or professional use, if you just have a lot of images on the service, either get them off now -- or pay a subscription.

For $49.99 per year, Flickr Pro not only lets you exceed the new 1,000 image limit, it also lets you go over the old 1TB one as well. It promises unlimited storage of full resolution images.

There's also more access to statistics about the use and re-use of your images, plus the company stops displaying adverts to you.

You'll get various other benefits from being a Pro user, such as increased lengths for your videos, from some time next year.

The company is currently offering a 30 percent discount if you upgrade to Flickr Pro before the end of this month. Note that while you can always cancel your pro account, you won't get refunds and your service will continue to the next renewal date.

Whether this is all worth the cost is up to you but we suggest that even if you're happy to pay for Flickr Pro, get a copy of your images off the system now.

The one thing we won't miss about Flickr is that it's always felt a bit amateurish and stuck in a Yahoo past. One of the changes coming to the service alongside this new limit is officially that you will no longer be required to use a Yahoo Mail account for your login.

The company says this has been a regular request from users and that they expect it to be popular when they introduce us. We just tried creating a new Flickr account and it accepted an iCloud address without problem so we're not sure what the fuss is.

Yet this does fit the kind of schizophrenic nature of Flickr where you bounce between modern, even beautiful website design and into pages that look like they were made in the 1980s. 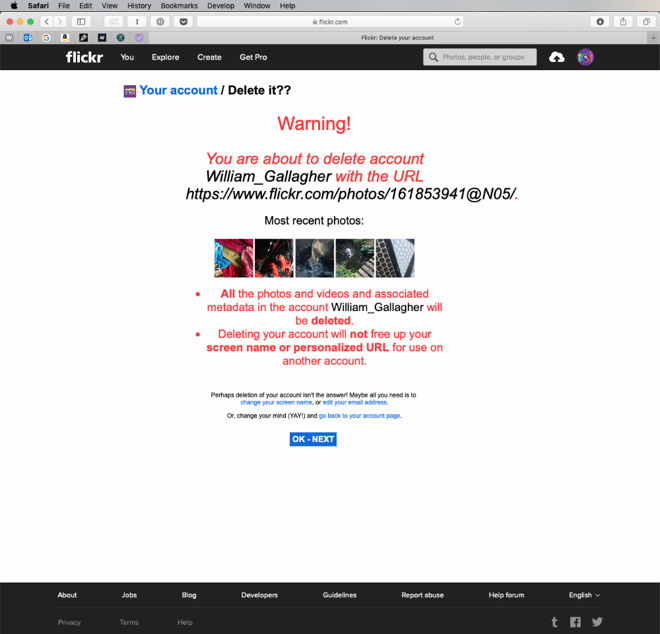 Right alongside beautifully designed images, Flickr gives you 1980s-style ones

You'd hope a company devoted to images would have a better-looking design but then design is about much more than how something looks. It's also about how it works and here Flickr is tedious.

Most of the time when you want to do something that affects all of your images, you log in to the service and click on the You button. Except when you don't. Other times, you need to click instead into your account settings.

These are held under an icon at the opposite side of the menu bar from You and under an icon that's your profile picture if you've set that up. Or a purple image of a camera if you haven't. 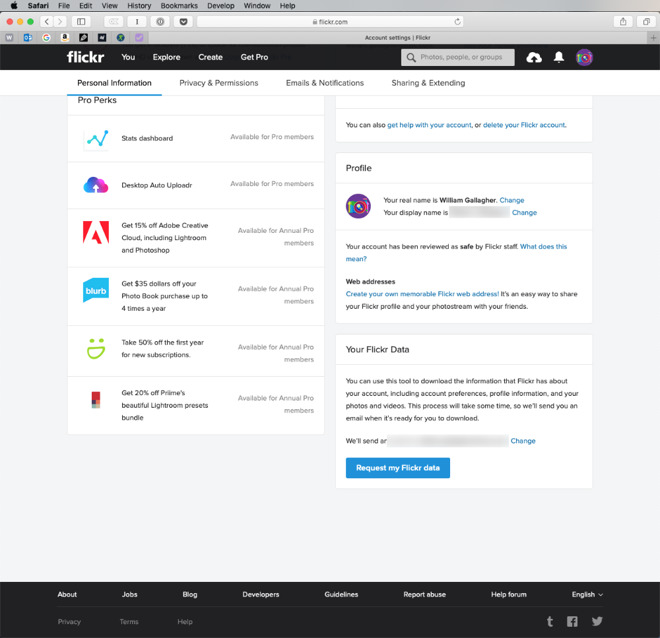 On the page that appears, scroll to the bottom and on the right hand side of the screen you'll see a section called Your Flickr Data.

There's a button marked Request My Flickr Data. Choose that.

Flickr doesn't give you the option to download your images right there and then. Instead it collates them all into a single zip file and emails you a link to download that.

It's not quick. In our new test Flickr account, we uploaded 10 images and then requested all our data. It took Flickr 12 minutes to send us the email link.

There's no way to extrapolate from that how long 1TB of images would take but don't leave this until midnight on January 7.

You do get all of your images. Only, it's not pretty. This is how our ten appeared when we downloaded them.

Forget the unintelligible folder name, we're just going to move the images out to storage somewhere else. Yet as well as that, every single photo has its original name with a Flickr reference number appended.

Maybe this is useful if you want to check where your images have been used. Maybe it'll help you track down every site that used to link to you on Flickr and now you have provide an alternative to.

These are your photos, though, they're not Flickr's and if it's down to either you or Flickr removing this extraneous filename data, we'd vote for them to do it. As they haven't, take a look at A Better Finder Rename 10 which is an app that will help you when you've got to change the filename on 1TB's worth of files.

Get the app and use these settings in the Character Positions & Ranges section.

If you're a photographer with, say, an old MacBook Air then there is the strong chance that you won't have enough storage space on your machine to download all of your images in one go.

In that case, you're going to have to do it album by album. Or if you haven't sorted your Flickr images into albums, then shot by shot.

When you're ready, look for the download button at the foot of the screen. You will have to scroll and it may be covered up by Flickr's warning banner about these new changes, but it's there.

Again, Flickr won't let you do anything right there and then, it has to collate the photos first. When it's done, the service will email you a download link.

Where to put it

Now you've got all these images, you do rather need to keep them somewhere.

The answer depends on what you want to do with the images. If you are solely storing them as an archive, look at online backup services -- but note that the first time you join one of these, it is going to take weeks to upload all these images.

To keep the images somewhere that you can easily share them to other people, your choices are more complicated.

Adobe Creative Cloud can give you up to 1TB storage for your images and it's a good service for sharing some or many photos. However, it costs about $120 per year for that and while you get Adobe Lightroom thrown in, it's over twice what Flickr Pro costs.

Then there is Dropbox which has 1TB for $99 per year and sharing images to people is reasonably straightforward if not as easy as it is on Flickr.

Similarly, Microsoft OneDrive can get you 1TB storage for $70 per year and that comes with the entire Microsoft Office suite.

There is also Google, though, which for the moment is complicated. Google is currently rolling out Google One, a service that might be just what you need for storying large volumes of images. However, it's not available everywhere yet.

You can sign up to be notified when you will be able to use it. And ultimately it will offer more than its rivals: for somewhere around $1,000 per year you'll be able to store up to 10TB. Or at least until Google decides to make this the latest service it closes.

Flickr's move doesn't seem unfair or unreasonable. We would, though, have preferred more than a few weeks' notice.

We'd also have liked a less clunky way of saving our own images out of the service.

Yet if it needs fiddling with and if it needs some patience, still at least you can get your images back and you do have options for where to save them next.