How Apple addressed the 'beautygate' effect in iOS 12.1

AppleInsider
Posted: November 11, 2018 8:00PM
in iPhone
In this video, we compare selfie photos captured by two iPhone XS Max handsets, one with the latest iOS 12.1 update and another running iOS 12.0.1, to illustrate the fixes Apple implemented for so-called "beautygate" skin smoothing effects.

As a brief refresher, Apple with its latest iPhone XS and XS Max models introduced a new camera feature called Smart HDR that greatly increases the dynamic range of both still photos and videos by combining multiple frames captured at different exposures. 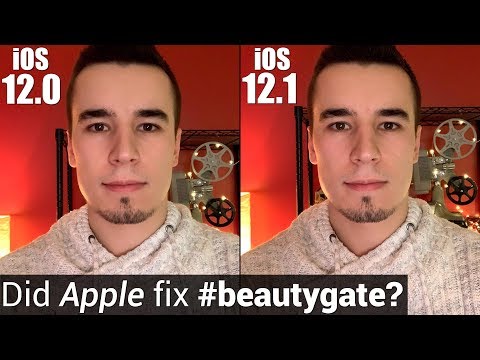 Due to its implementation, Smart HDR can in some cases lower local contrast and introduce noise in low light photos, the latter of which is dealt with using fairly aggressive noise reduction.

Last month, users taking selfies noticed the Smart HDR feature would smooth out their skin to a point that made resulting photos appear doctored. Known as "beautygate" -- a term implying Apple intentionally enabled the effect -- the issue was ultimately tracked down to a software bug that at times selected the wrong base frame for HDR processing. Instead of choosing a frame with a short exposure and more detail, Smart HDR would opt for a frame with a longer shutter speed.

Under many conditions, the extra noise reduction on iPhone XS made skin appear soft, even when compared to selfies taken with iPhone X. In brighter conditions, however, "beautygate" becomes a nonissue because frames are captured at short exposure times, meaning there is no need for enhanced noise reduction.

Comparing photos captured on identical hardware, the difference between iOS 12.0.1 and iOS 12.1 is immediately apparent. The beauty filter look is now gone, though there is also noticeably more noise.

If we crop in, the difference in noise is easy to see if you look at the wall.

Before the update, the long exposure base frame with extra noise reduction smoothed out all of the details, making facial hair and pores look blurry.

Now adding a little bit more light, there isn't as much of a difference, but the same differences are apparent by cropping in. Some of the pores on the left look smoothed out, whereas with iOS 12.1, everything is super sharp. Not only that, but if you look closely, you'll notice that there's a little bit more contrast after the update.

Now moving directly in front of a window, it's hard to notice any difference at all since noise reduction isn't a factor anymore.

However, you'll notice that there's a little bit more contrast with 12.1, just by looking at the pores. The extra contrast is more easily noticeable if you look at the gray sweater.

Moving outside, it's hard to notice a difference, but if you look closely, the extra contrast is definitely there. It's easily noticeable if you look at the eyebrows.

Again, in this photo, we see the same results. It's a very subtle change but it definitely makes a difference. There is a general increase in detail across all of these photos as well.

In some photos, the contrast difference is more noticeable. Compare the difference in detail in the stones below and you'll notice all of the fine details come out after the 12.1 update thanks to the extra contrast. The shadows on the lawn look darker with 12.1 and the tree itself looks more detailed with the added contrast.

Though Apple addressed the "beautygate" issue with iOS 12.1, the switch to a shorter exposed base frame reintroduces some extra noise. Along with that, it seems that Apple toned down the warmth of iPhone XS photos a bit.
«12»