AppleInsider
Posted: January 28, 2019 5:42PM
in iPad
Apple has published a new video to YouTube that highlights the utility of the iPad Pro, by showing how a recent video series showcasing the tablet's main features was filmed and produced using the mobile productivity device. 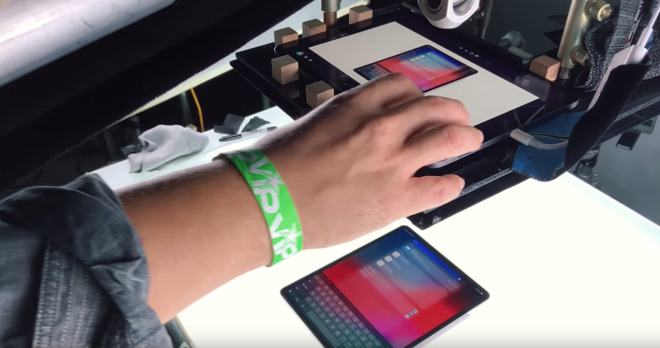 On January 18, Apple posted a series of iPad Pro films that positioned the tablet as a "new way" of accomplishing tasks, rather than as a PC replacement. The five short videos showed off the hardware's performance, integration with the Apple Pencil, and the use of iOS apps to accomplish tasks.

In a new video posted to the channel on Monday titled "A new way to go behind the scenes," the company showed off how it produced the series, which were filmed, edited, animated, designed, and composed on the iPad Pro.

The shots of the iPad Pro on a white background were shot with a second iPad Pro suspended on a tray above the surface, capturing the screen and hand movements of the "subject" iPad Pro. Filmic Pro was used to capture the video, due to its fine-grained control of shutter speed and white balance.

Editing was performed using LumaFusion, with animation performed on Core Animator and Keynote. Music for the shorts took advantage of the virtual instruments available in GarageBand, while Procreate and Notability were used for designing and planning the shots.

While the iPad Pro's flexibility is the focal point of the video, it also highlights the large amount of other elements it took to get all of the shots, including lighting rigs, a custom rig to hold the filming iPad Pro.