AppleInsider
Posted: January 29, 2019 12:59PM
in General Discussion edited January 2019
Apple is excelling at retail because it has different aims to other stores, retail chief Angela Ahrendts advised in an interview, with the company bucking the trend of store closures though "experiential retail" and providing education to the customer, rather than just selling merchandise. 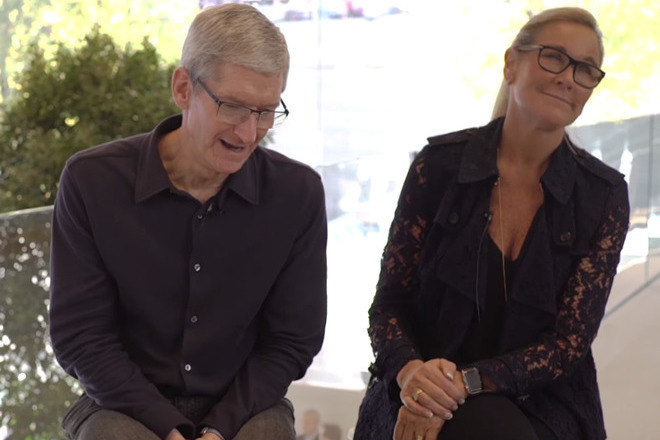 Speaking at the former Carnegie Library in Washington, DC, Ahrendts advises Apple is "now opening fewer, larger stores so that you can get the full experience of everything that's Apple." The aim is to build long-term customer relationships in its stores, and it can only do so by showing as much as it can of its products and services to customers.

The philosophy continues what founder and CEO Steve Jobs envisioned for the company's stores, Ahrendts told Vogue Business. "Steve told the teams when he opened retail 18 years ago, 'Your job is not to sell, your job is to enrich their lives and always through the lens of education,'" Ahrendts noted.

The push towards providing a place to meet rather than to sell is important, according to the retail head, advising "I think as humans we still need gathering places, and when you are serving digital natives, the thing they long for more than anything is human connection. Eye contact."

Apple's offering of non-sales elements in its stores, its Today at Apple events that ranges from classes to concerts referred to as "experimental retail," is being adopted by others. Urban Outfitters is noted to have three "Space" stores where it hosts gigs and workshops, whole the Reel Mall in Shanghai offers carpentry and jewelry-making classes.

Ahrendts has seen these elements crop up elsewhere, highlighting efforts by Soho House and CitizenM with praise. "They have filled this huge niche, a combination of experience and human connection."

As a major retail presence around the world, Ahrendts advised of the use of technology to improve the retail experience. In stores, there are thousands of beacons used to connect with the Apple Store app on iPhones, welcoming customers while allowing for purchasing without going through the cash register"

"As we renovate every store we update all the technology," it is advised. "We don't want to be gimmicky, but stores need to become living, breathing spaces, not just two-dimensional boxes."