AppleInsider
Posted: February 18, 2019 12:48PM
in iOS edited February 2019
Apple's patch to close an exploit in Group FaceTime is only partially successful, as some users are reporting the service is preventing them from adding more contacts to a FaceTime call that is already in progress, an issue that Apple seemingly knows about. 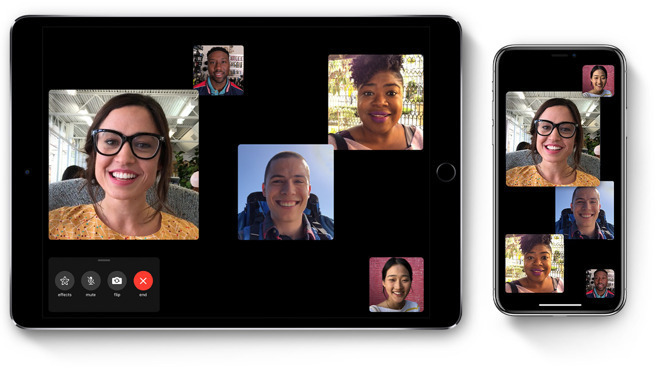 Apple's iOS update to 12.1.4 largely consisted of a bug fix for a widely-publicized Group FaceTime exploit. While the update effectively re-enabled the feature, with iPhone and iPad users able to set up Group FaceTime calls once again, not everything appears to have been solved by the patch.

Affected users are still capable of commencing a Group FaceTime call with multiple other contacts, but shifting from a one-to-one call to one with more than three people taking part is seemingly failing.

A reader of MacRumors has reportedly received a confirmation from Apple Support that it is a known issue, but with no timescale for a fix. Posts from Apple's Twitter-based support also mention the limitation switching between FaceTime and the Group version.

As the issue doesn't directly prevent Group FaceTime from being used and is less severe in nature, unlike the exploit, it is probable that Apple will release an update for iOS resolving the issue, albeit at a less urgent speed. It is plausible a fix could arrive as part of iOS 12.2, which is currently undergoing the beta testing process.

The exploit, discovered in January, enabled users to eavesdrop upon a contact using the Group FaceTime system, without any need for the extra participant to pick up the call before audio and even video is transmitted. Apple quickly disabled the feature before creating the patch, and has rewarded the teenage discoverer of the bug via the company's bug bounty system.

The emergence of the bug has prompted lawsuits, including one claiming a lawyer was taking a deposition.