AppleInsider
Posted: February 19, 2019 12:26PM
in iPad edited December 2019
More speculation about Apple's rumored fifth-generation iPad mini suggests it won't have any major changes to its appearance, with one prominent leaker examining a CAD file believing the compact tablet will largely be similar to the fourth-generation model but with improved specifications. 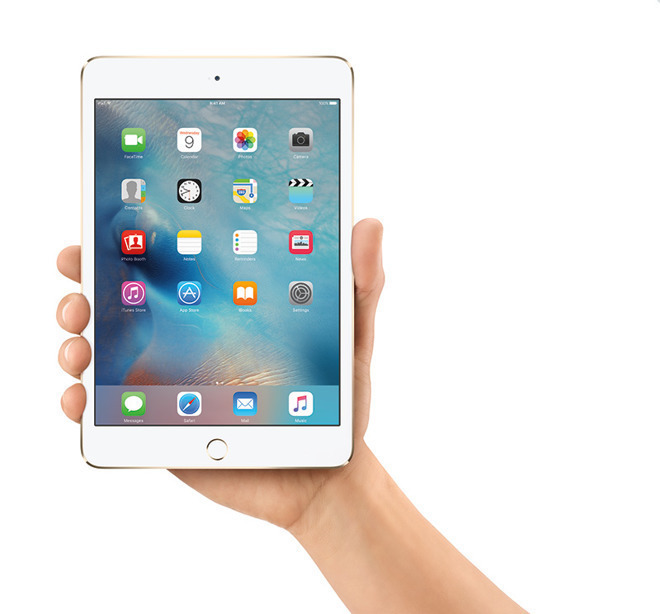 Apple's fourth-generation iPad mini, which the fifth-generation model is likely to look like according to rumors

Rumors surrounding the "iPad mini 5" have been relatively frequent and consistent, with repeated reports claiming Apple is not going to make any big alterations to the design of the tablet. Aside from minor changes, the story so far seems to be one where Apple is preparing to release essentially an unchanged design, though with improved internals to make it more attractive to purchase.

Steve H. McFly, known as OnLeaks on Twitter, claims he has acquired a design drawing for the alleged "iPad mini 5," and that there are "no external design changes" save for a relocated microphone. This seemingly matches details provided from a report one week prior, which claimed the microphone's position shifted from the back to the "center of the upper back."

Just got my hands on alleged #iPadMini5 CAD. If legit (can't vouch at 100%), there is indeed (just as rumored) no external design changes (except of relocated mic, centered on upper back panel). In short, it will very likely be a specs bump only update... pic.twitter.com/z5XuBKZVmN

"In short, it will very likely be a specs bump only update," advises McFly. The Twitter post also notes that there is a possibility this could all be wrong, as he "can't vouch at 100%" for the authenticity of the CAD document.

Speculation of a potential launch for a new iPad mini model have accelerated since the start of 2019, and has even involved well-known analyst Ming-Chi Kuo of TF International Securities advising to investors of its likely release.

New iPad models have been confirmed by regulatory filings, but what exactly will be arriving has not yet been determined. In the case of the iPad and iPad mini 5, a late January iOS 12.2 beta release appeared to show references to new iPads that won't work with Face ID, suggesting the continued use of Touch ID.

There has been a suggestion Apple could commence preorders for the new models on March 22.