AppleInsider
Posted: April 2, 2019 2:03PM
in General Discussion edited April 2019
Apple's self-driving vehicle technology has the potential to make being a passenger even safer than before, with the company coming up with ways to determine how fast the car is moving along a road without using traditional sensing technology, as well as how the wheels slip in hazardous conditions. 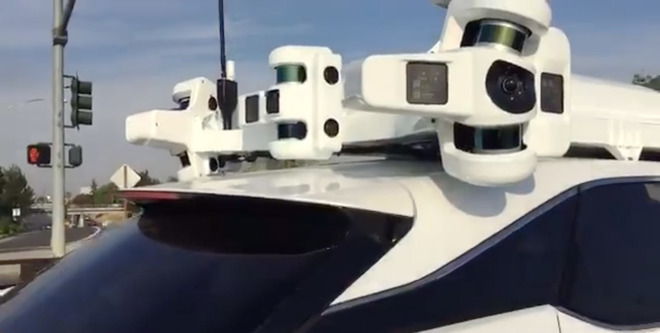 Almost all drivers rely on the speedometer of a car to know how fast they are traveling, as well as the general feel of how the vehicle moves advising whether the driver should pay more care and attention. Wet or icy roads handle differently from dry versions, and while a driver may expect a vehicle to behave in a specific way normally, under such conditions the effects of turning the steering wheel may have to be exaggerated to achieve the desired effect.

Add in the variables in tire compliance, directional stiffness, the size of the tyre, temperature, pressure, and car load among other elements, and it becomes a much harder task to manage.

The problem of changing weather and conditions is one shared with self-driving vehicle systems, which feature a plethora of safety systems to ensure those inside the car remain away from harm. Current systems to determine the road-relative velocity include wheel encoders, inertial sensors, and monitoring GPS signals, but Apple deems most of these to be inadequate.

Inertial sensors are easily affected by drift in noisy accelerometers, affecting velocity detection. Global national satellite systems like GPS are also thought to be unreliable for the purpose, due to being jammed by natural structures and by technological means.

In a patent granted by the US Patent and Trademark Office on Tuesday, Apple's "Apparatus and method to measure slip and velocity" aims to solve the problem with more sensors, in two different ways.

In the first method, Apple suggests the inclusion of two sensors at the bottom of a vehicle, scanning the road or ground below. By measuring reflected electromagnetic waves from both sensors, a system has the opportunity to generate a pair of "Doppler slopes" which can be used to determine how fast the ground is moving below the vehicle, as well as at what angle. 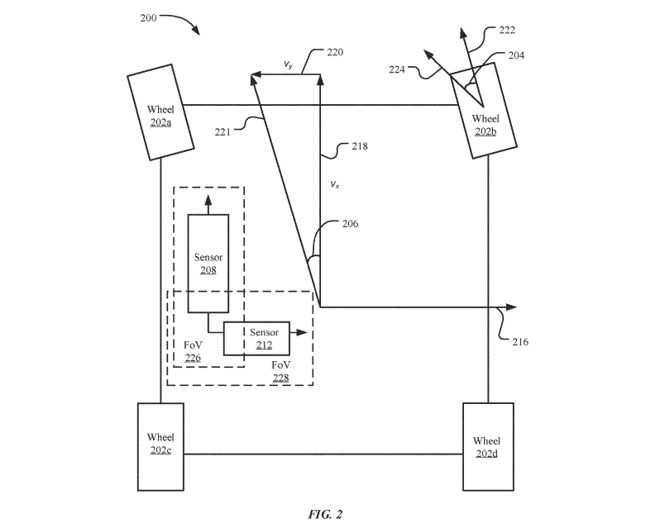 The first data point advises of how fast the car is going. The angle informs the self-driving system of movements outside of what the system expects, like if it is turning around a corner but the sensors reveal it isn't actually turning enough, like on an icy road.

This data can then be compared with other versions from inertial sensors and GPS, to make sure it is correct.

A second version of the system uses beamforming sensors and electromagnetic waves, again pointed at the road and using reflected waves.

In this second case, rather than pointing just vertically, Apple suggests using multiple sets of sensors to point not only down at the road, but also at an angle towards the front of the vehicle. As well as capturing the velocity and slip using a larger measured area, this second version will also produce sensor data for longitudinal and lateral velocities. 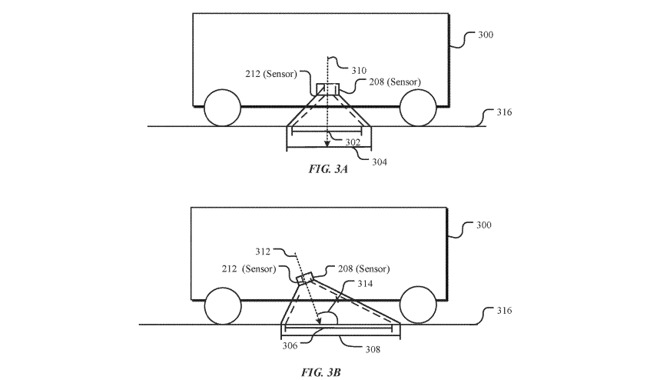 Again, the data is harvested and compared against other sensors, and ultimately used by the self-driving system to inform its movement decisions.

Apple files numerous patents with the USPTO on a weekly basis, but while the chance of the concepts described appearing in a future product or service isn't guaranteed, the filings do indicate areas of interest for the iPhone maker's research and development efforts.

Apple has put considerable resources towards "Project Titan," the name used for its automotive efforts. While originally thought to revolve around producing an Apple-branded car, the project has changed focus over the years towards creating self-driving vehicle systems, which Apple has been putting to the test via a fleet of vehicles in California.

Despite seemingly moving away from a complete vehicle, some reports have suggested a car could still be in development, like the recent discovery Apple hired Tesla engineering VP Michael Schwekutsch for potential work on a vehicle's powertrain.

Other self driving-related patents and applications include one where a car's sensors could be made to capture data on points of interest for drivers, the use of gesture controls to move autonomous vehicles, using augmented reality to show the road ahead and other information on a windscreen, inter-vehicle communications with other self-driving systems, and the ability to summon and pay for travel in a self-driving taxi using a mobile device.