AppleInsider
Posted: May 27, 2019 1:21PM
in General Discussion
AMD has teased its next generation of graphics cards using the Navi GPU as the RX 5000-series, offering performance and power improvements over its Graphics Core Next offerings, with the first RX 5700 card in the range set to arrive this July. 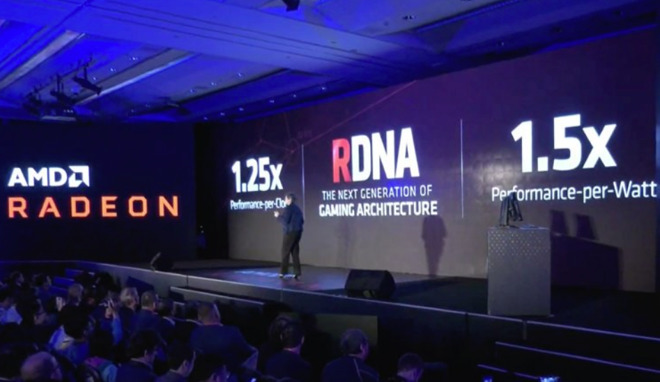 Announced at Computex on Monday during AMD's keynote, the RX 5000 series is using a new architecture called Radeon DNA (RDNA), which will be used alongside the more established Graphics Core Next architecture. As part of the architecture change, the new GPU called Navi will be used, which is said to offer considerable improvements over its predecessors.

The compute units within Navi have been refined from the versions used for Vega, to make each as efficient as possible. In theory, a Navi compute unit will be 25% faster than a Vega equivalent per clock, with a 50% improvement per watt of power used, in part due to AMD's switch to using TSMC's 7-nanometer production process.

At the same time, AMD has performed more refinement of its graphics pipeline to specifically cope with high clock speeds, along with introducing a multi-level cache to minimize bottlenecks.

To accompany the new architecture, AMD is also adding support for GDDR6 memory to the platform, further improving the memory bandwidth from that offered by GDDR5-based cards. Lastly, the GPU supports PCIe 4.0, offering the promise of increased bandwidth on systems that support that connectivity.

AMD's first card using the Navi GPU will be the RX 5700, which it will be launching in July. Details about the card were not advised, but more information will apparently be offered during E3 on June 10.

While AMD is one of two main companies in the graphics card industry worth watching, it is largely the only one of interest for Mac users. Modern Nvidia GPUs are not able to be used on macOS without some considerable effort, as Apple has made the decision to not approve Nvidia's drivers, effectively making AMD's cards the default option.
«12»