AppleInsider
Posted: May 31, 2019 1:34PM
in iPhone
Apple has quietly raised the cap on cellular App Store downloads from 150 megabytes to 200, an acknowledgement of the growing size of iPhone and iPad apps in general. 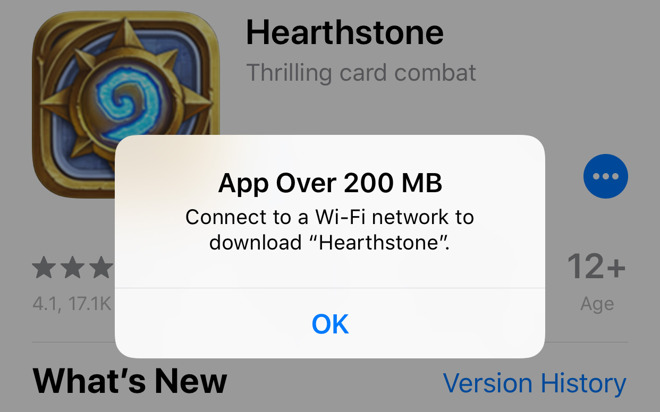 It's not clear when the change was made apart from sometime this week. The limit is intended to prevent people with restricted data plans -- many people in the U.S. -- from accidentally incurring overage fees, which are often disproportionate to the amount of data used.

Apple has been relatively slow to adjust its download limit. In fact the last such move dates back to September 2017, when the ceiling rose from 100 megabytes. It was only in 2013 that the company hiked it from 50 megabytes.

When the App Store first launched in 2008, the cap was only 10 megabytes -- less than individual art assets on some modern websites. iPhones were limited to 3G speeds at the time however, and when capped, data plans were often much more conservative.

Even iOS 12 has no way of disabling download limits. Instead people are prompted to connect to a Wi-Fi network, at which point downloads can resume.

Most of the apps impacted by this week's news are likely to be games, since they often require large art and audio assets. Most A-list games like Hearthstone are well over the 200-megabyte limit though, as are many non-gaming titles. Facebook tops 457 megabytes, despite occasional efforts to jettison unused features.