AppleInsider
Posted: July 1, 2019 11:51AM
in General Discussion
Alleged leaked CAD renders of the new 2019 iPhone have appeared on the internet, showing details that line up with prior rumors about the devices expected to launch in September 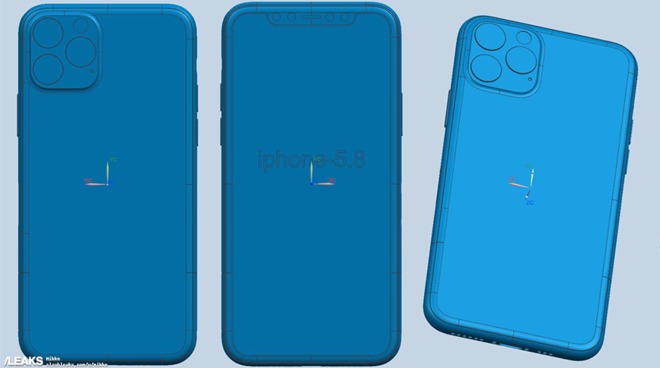 The renders that appeared on Slashleaks showcase the triple-camera, as well as the controversial alignment of the lenses, and the square-shaped camera bump.

The third camera lens on the next iPhone could potentially be a super-wide lens, that features a broader zoom.

Like the iPhone XS, iPhone XS Max, and iPhone XR, the phones will likely be 5.8 and 6.5-inch OLED iPhones, with a 6.1-inch LCD iPhone rounding out the line. The new iPhones are also rumored to have larger batteries and be roughly 0.1 millimeter thicker than older phones.

The new iPhones will likely look quite similar to the current generation, though rumors suggest that in addition to a frosted glass back, lavender and green may be added to the upcoming color lineup. It is expected that they will also be available in black, white, yellow, and (PRODUCT)RED.
«12»