AppleInsider
Posted: July 3, 2019 3:55AM
in iOS edited July 2019
Graphical assets and a code snippet in Apple's latest iOS 13 beta suggests the upcoming operating system will allow users setting up a new device, or restoring a device from a backup, to transfer critical data over a wired connection. 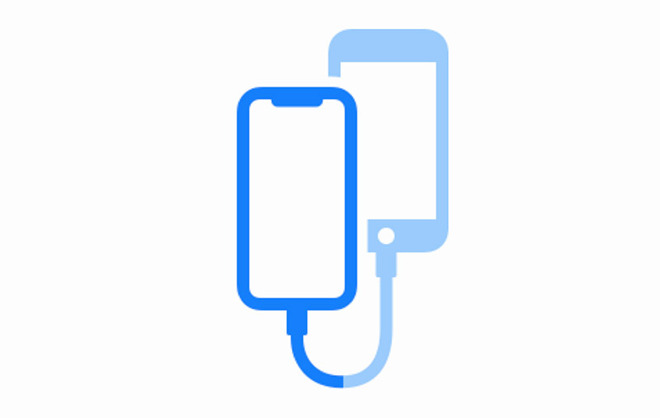 Included in the third beta release of iOS 13, issued to developers on Tuesday, is evidence that Apple is developing a new method of transferring data during the device setup process.

First spotted by 9to5Mac, an icon and string in the Setup app, which runs when first configuring a device or after performing a reset, suggest Apple is working on a solution that ferries data from one iOS device to another via a direct physical connection.

Currently, the setup process involves downloading and installing backup data stored in iTunes or iCloud. Alternatively, devices running iOS 11 or later can use the Quick Start feature to wirelessly transfer data from an old device to a new device, a procedure similar to the setup process for Apple Watch.

The newly discovered assets include a graphic depicting what appears to be an iPhone with Face ID connected to an iPhone with Touch ID via cable, perhaps signifying a tethering between new and old devices. A code string seemingly backs up the theory that a new wired transfer option is in the offing.

PROGRESS_DETAIL_WIRED = "Keep your other iPhone connected to this iPhone and connected to power until the transfer is complete.";

How a user is expected to concurrently connect one iPhone to another iPhone as well as a power source is unknown. Apple does not market a Lightning-to-Lightning cable, though the company could conceivably unveil such a product alongside a new iPhone expected for release this fall. Another option could be existing cables that terminate in Lightning and USB-C, forwarding rumors that claim the next-generation handset will make the switch away from Apple's proprietary protocol.

The publication was unable to force the graphical asset or code string to appear on a device running the latest iOS 13 beta.

Apple is expected to update its iPhone lineup this fall with three new smartphones. Like last year, two OLED models and one LCD variant are anticipated, with the top-end versions rumored to boast a new triple-camera array that adds a super-wide angle shooter to the current wide-angle and telephoto modules. Other rumblings point to a dual-camera array for the follow-up to Apple's "entry level" XR series.

Along with the camera upgrades will be the usual assortment of hardware and software performance improvements.