How to pick between InDesign, QuarkXPress and other publishing apps

AppleInsider
Posted: July 18, 2019 10:03PM
in General Discussion edited September 2019
Whether you've got to make a simple one-page poster or lay out a complex book, there are apps that are perfect for the job. If you're in the starting phases of figuring out which heavy-hitting desktop publishing application you want, we can help you out. 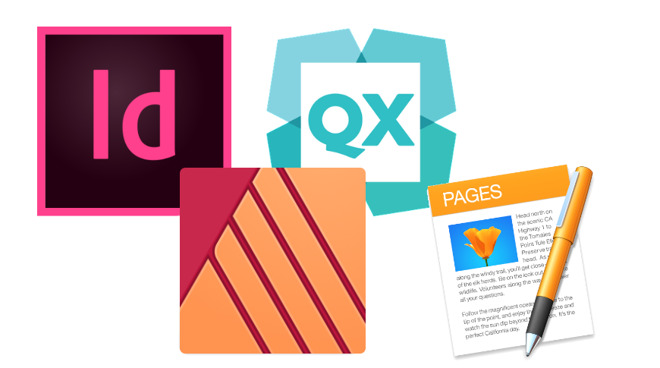 Blame Affinity Publisher. Before that was released, your choice for the right page design app was clearly Pages for basic work and either Adobe InDesign or QuarkXPress for the complex jobs. You still had to figure out whether you were a Quark or InDesign person, but for the longest time, that was substantially less of a hard choice than it should have been.

That's because it's been decades since Quark ruled the world. And the reason Adobe InDesign replaced it is as much down to missteps by Quark as it is the correct steps by InDesign.

However, QuarkXPress is again a powerful app and now it's Adobe that has alienated users, first with its subscription-only model. We've covered how third-party alternatives are helping people whose needs make Adobe Creative Cloud uneconomic.

More recently, however, there have also been legal issues that are affecting users. While Adobe won't or can't explain the reasons, it appears that it's because of a legal dispute that the company has changed how users can stay on older versions of InDesign.

One of the selling points of subscriptions was that you would always have the latest version. However, the people who most benefit from a subscription, and for whom the cost of that is more than worthwhile, are the same ones who cannot risk upgrading in the middle of a job. So it's genuine problem that Adobe is forcing them to do it.

Which means there are practical reasons to choose something other than InDesign. We're also, however, now in a position where we have a great many options.

Each of your options, most definitely including InDesign, have strengths that the others do not. It's not as if those strengths are always in specific features, though. They are in the abilities of the software, but there's also pricing and the entire ecosystem that each app has created around itself.

That includes Apple's free Pages app, which is part of the iWork suite and offers surprisingly good page layout features. 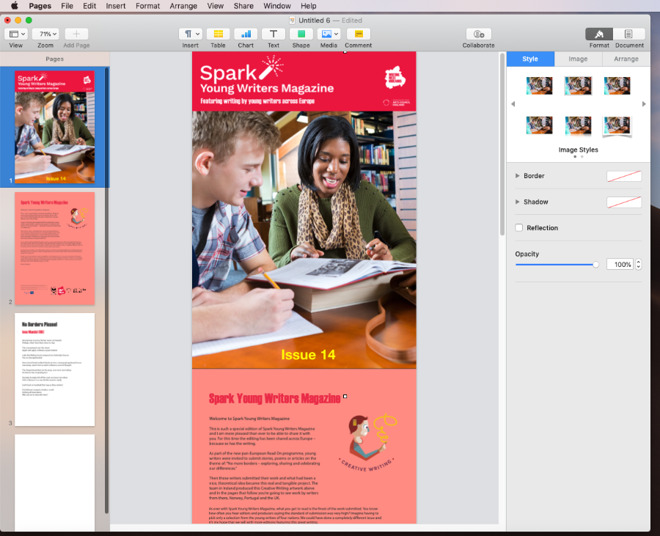 Pages can lay out a document, but don't use it for a long one, and don't aim for absolute precision

It's definitely a case of word-processor-plus rather than design-app-minus, however. Rather than thinking of the page as a canvas upon which you place your text and images, you have to think of it as a document that you're inserting elements into.

Use Pages for short and occasional jobs, not for when you have to produce many pages or require precise control over the layout.

For anything beyond the basics, the answer for years has been Adobe InDesign. 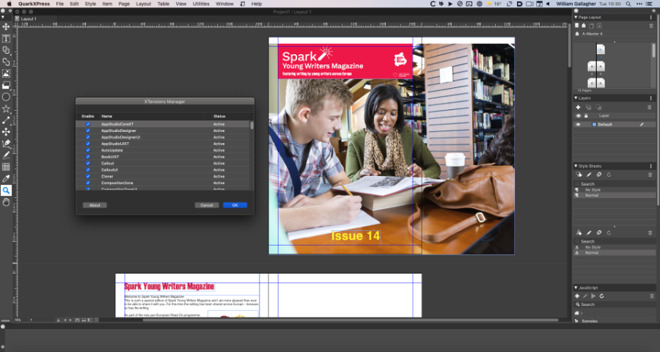 QuarkXPress is again a strong option in 2019, but it's got a long way to go to unseat InDesign

QuarkXPress is again a strong contender, but it has a tough job because InDesign is not the market leader just because it happens to have market dominance. It does now have that volume, and that does mean you're more likely to work in a publishing house that uses InDesign. However, Adobe InDesign is also exceptionally good.

That said, Quark has strengths and if you were the sort to just automatically buy the dominant platform, you wouldn't be a Mac user.

Quark told AppleInsider that it differentiates itself from Adobe and InDesign by how it sees page layout as just one of the tools designers can use it for. QuarkXPress 2019 is built to also design functioning web pages and even iOS apps. InDesign can also be used for both, but Quark is focusing on this.

To our eyes, the controls and toolbar icons in Quark don't seem as aesthetically pleasing as InDesign, but its ability to make responsive-design web pages and simplifying the development of certain types of iOS apps is impressive.

Plus, Quark has a significant advantage over InDesign because of its pricing.

You actually can subscribe to Quark -- it costs approximately $325 per year compared to $252 per year for Adobe InDesign. However, you can still buy Quark outright for $849 and, while it doesn't immediately sound like it, this is actually its big advantage.

The benefit with Quark is not the specific amount of the fee, or that you can reduce that by moving from InDesign, it is the ability to just pay once. 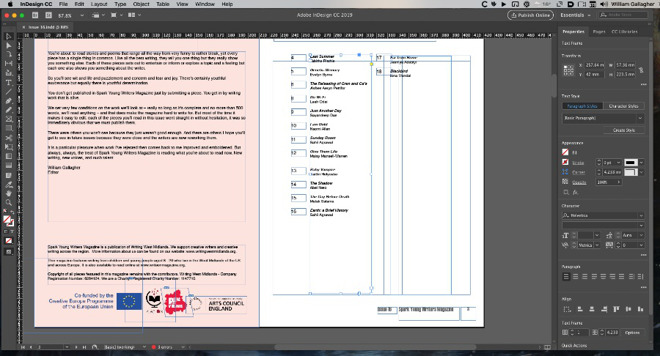 We're not saying we're the best InDesign users, but we are saying InDesign itself is very good.

One publisher told us that she didn't just prefer Quark's model, she was actually compelled to use it because of conditions attached to her funding.

If she were starting up her business today, though, she might very well have gone for Affinity Publisher instead. It's a new app from Serif, the makers of Affinity Photo and Affinity Designer.

Affinity Publisher claims to be full-featured page design software and in our few weeks' experience so far, it is a capable and powerful app. We don't doubt that designers deeply steeped in either InDesign or Quark would find it lacks some features they need, but so far we'd be surprised if there were many.

And if Affinity Publisher feels as if it sits in the sweet spot between Pages and InDesign, that's really only because of its price. Just as with Quark, Affinity Publisher is a one-time purchase -- but unlike Quark, it's only $50.

It also has a world-beating feature called StudioLink. You'll never call it by that name, you'll never even remember the name, but once you've used it, you'll know this is how all page design apps ought to work.

You need more than page design

Page design apps might be the center of your work, but they can't easily be the sole tool you use. That's because every publisher and certainly every designer also needs the ability to manipulate images and graphics.

With this StudioLink feature, Affinity Publisher users get this facility in place, right in the page documents, but using tools from other apps. If you have Affinity Photo or Designer, you get the entire power of those apps directly within Publisher.

There's no round-tripping, when you send an image out from, say, InDesign, to Photoshop to make changes, and then save it back.

The ability, instead, to click one button and have your document be wrapped around with the entire feature-set of Affinity Photo or Designer, is more than convenient, it changes how you work.

With one click, you can be editing your document in Affinity Publisher (left), or making precision image adjustments in Affinity Photo (right)

Rather than making an adjustment in a separate app and hoping that it looks right when you bring it back into the publishing one, you can see every change and how it will appear, right as you do it.

Adobe InDesign doesn't have this. Quark, though, has at least some in-place tools. QuarkXPress includes image editing features, filters and illustration tools. They're not as comprehensive as the ones in Adobe's Photoshop or Illustrator, and they're not as strong as the ones in Affinity Photo.

However, they may well be enough for most publishers to do most of the image work they need.

You have to try them

We can say what applies to most publishers and most of their needs, but that's little use if you happen to need more. While hopefully you can now see at least which couple of apps are worth trying for your specific situation, you need to go test them.

That's easy enough with InDesign and Quark as there are free trial versions available for both. There isn't a free trial for Affinity Publisher, though that may change as the company does offer trials for both Affinity Photo and Affinity Designer.

Even though there isn't a free trial of Affinity Publisher, however, we still recommend buying it if you're new to page design. There is a strong chance that it will be able to do all you need, and if you find that it can't, you'll have also found what specific features you really require. And that will help you pick between InDesign and Quark.

If, instead, you are a long-time page designer, buy Affinity Publisher anyway. Do it from artistic curiosity, do it from professional interest. This app is new and it is cheap, compared to the alternatives, but it's also both powerful and actually absorbing to use.

When it's your job to design pages, it's of course worth your time and the money looking into what works best for you.

However, when this is what you do for a living, you also need to enjoy this tool that you spend your whole day using. Quark, InDesign and Affinity Publisher may overlap in terms of features and capability, but they also have a rather different feel and that's not to be ignored.