How to force a Mac application to quit

AppleInsider
Posted: July 22, 2019 6:44PM
in General Discussion edited October 2020
From just using Command-Q to entering Terminal commands, there are a surprising number of ways to quit an app -- and, at times, we need them all. Here's how to get rid of an app that just won't quit. 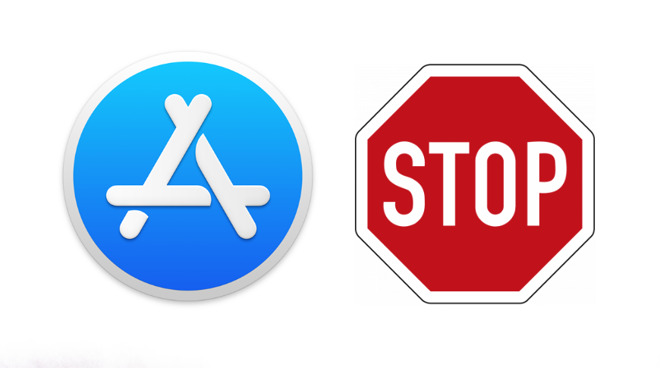 The App Store icon next to a US Stop road sign

In theory, every Mac app has a File menu and they all have Quit as the last option in the list. In practice, you've occasionally come across ones that have been poorly ported from Windows and lack this basic feature. However, you've also far more often had an app simply refuses to quit.

Whatever's going on that means it grays-out the File/Quit option and won't look for your Command-Q keyboard, there is one thing certain. This app ain't coming back. Something has gone wrong and the only way to fix it is to force the app to stop.

Here are the many ways to do that -- arranged in the order you should try them.

Try Command-Q keystroke, even if it doesn't appear to do anything. It's possible that the app will react to it eventually, and if it does, this is the only chance that you have to not lose work. 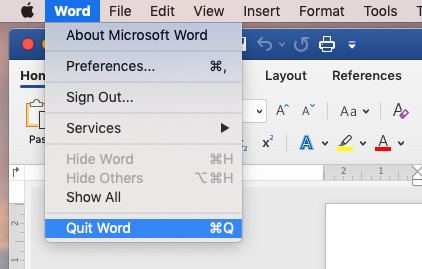 It's worth a shot. Even if the Quit menu is grayed out, try the Command-Q keystroke and wait.

The reason is that whatever has gone wrong with the app, it may still be trying to save your document. With any other method you can use, you are killing the app immediately and whatever slight possibility that it was saving at the time is gone.

If the app doesn't respond after a couple of minutes, use macOS's Force Quit.

We're not saying Apple knows this happens a lot, but it does give us a lot of ways to force quit an app.

You'll find the first two under the Apple menu in the app. There's a menu option called Force Quit... and it's got a keyboard shortcut, Command-Option-Escape.

That shortcut may be familiar to you if you've been using Macs for a long time. Both it and the menu option launch the Force Quit Applications dialog which lists all of your currently-running apps. 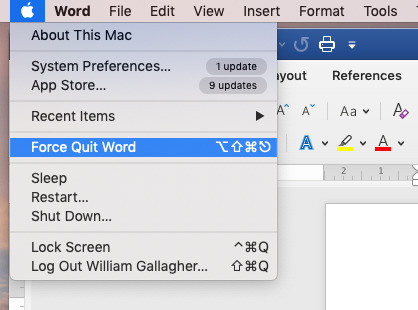 Under the Apple menu there's Force Quit... which opens a dialog and highlights whichever app you were in.

If you do Command-Option-Escape anywhere on your Mac, you get this dialog and you can scroll to the problematic app. Usually it will have the words "not responding" next to it. If it hasn't got that, consider leaving it a little while longer, as it still might be working.

All that choosing the Force Quit menu from within an app does is launch this dialog and put your cursor on the entry for that app.

When you've got the cursor on the app name you want, click Force Quit. And as soon as you can afterwards, click the red close button or type Command-W to get rid of the Force Quit dialog before you accidentally kill another app. 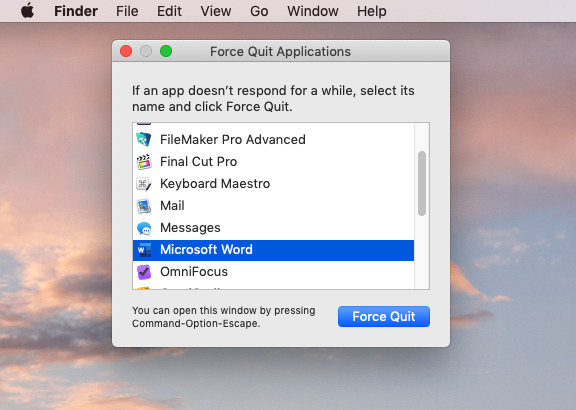 There is absolutely no reason why we have chosen to use Word as our example of apps that need force quitting, oh no.

What may be less familiar than all this, is the subtly different keystroke, Shift-Command-Option-Escape. If you instead press that, you don't call up this dialog box, you just force quit whatever application is in the foreground at the time. That is, it kills the app whose name is up next to the Apple menu in the menubar, and it does so right away.

There's yet another way to Force Quit an app, and that's from your Dock. 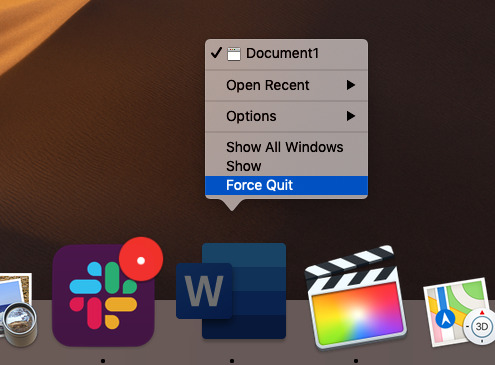 Right click on the Dock icon and then with the menu option, tap the Option key to get Force Quit

If you right-click on a running application in your Dock, you will get a menu that includes Quit. With that menu on screen, press and hold the Option key on your keyboard. Quit will turn to Force Quit.

When all else fails

Sometimes, though, none of this is enough. In which case, there are two further things you can do. They're both like using a blunt instrument and they can both cause other problems if you're not careful, but they will definitely do the job.

The better of the two remaining weapons is the Terminal app that comes with your Mac.

Launch Terminal from your Applications/Utilities folder, and at the command line prompt, type the word killall followed by the name of your app.

Often, that's all you need to do. Terminal will just quit that app for you.

However, there are many cases where Terminal will just give you an error message such as "no matching processes were found."

Typically there are three reasons for this. A simple one is that you mistyped the name of the application -- as well as typing it correctly, you have to get the case right. Typing killall photos will not quit Apple's Photos app, for instance, whereas killall Photos should.

If the app's name is two or more words, then you have to enclose that name in speech marks. So it's killall "Pixelmator Pro" and killall "Final Cut Pro". 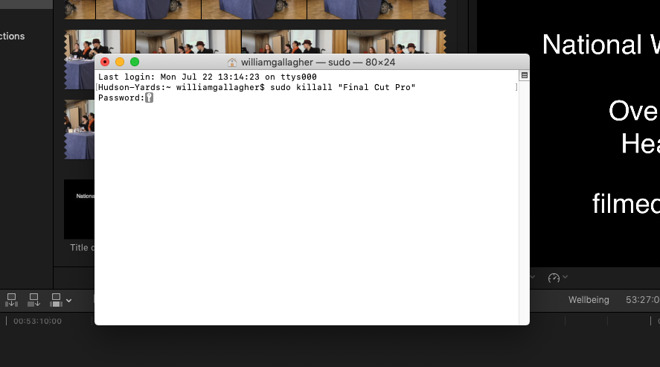 Just to show we're not picking on Microsoft Word, here's how to use Terminal to force quit Apple's Final Cut Pro X.

Notice that it's not "killall Final Cut Pro X", even though that is the proper name of the video editing app. It has to be the same name that you see in the Dock or in your Applications folder.

Even when you get all of this right, however, it may still not work because your Mac doesn't believe you've got the permission to quit these apps.

In that case, the error you'll get is "no matching processes belonging to you were found." Assuming that you are the admin user of your own Mac, you just need to prefix the killall command with sudo.

So it becomes sudo killall Photos. You may be prompted for your password, but it's just the same password you use to sign in to your Mac.

The reason that this particular blunt instrument is dangerous is because you shouldn't mess around in Terminal unless you know what you're doing. But the reason it's better than the final option, is that it's the last method to treat an application as a single entity.

In reality, an app might be several software processes and it's possible to force quit just one of them. That won't magically make the rest of the app work, and what's more, you may not recognize a process enough to be sure which app it's from. 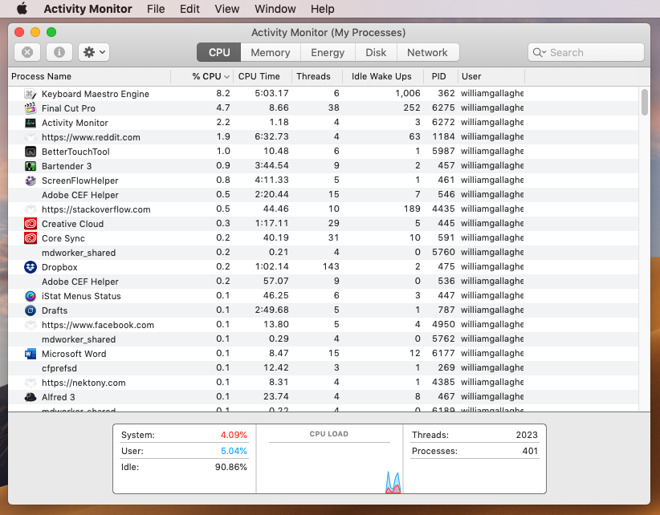 Good luck identifying everything in this Activity Monitor list. But if something is taking up all your CPU time, you'll see it here.

However, this approach might help you identify what's going on. Launch Activity Monitor from your Applications/Utilities folder and in a moment you'll see a list of absolutely everything running on your Mac.

Not only won't you recognize all the names on the list, that very list will keep changing right in front of you. That's because it's always sorted by some constantly changing criteria such as what percentage of CPU activity the app is currently taking up.

That's the kind of information that might be helpful. If you can see that a process is taking up a huge amount of CPU activity, or memory and so on, you may be able to recognize what it is. If you're sure you know which process you want to quit, click to select it -- and double check that you got the right one, that the list didn't change right under your mouse click.

Then click on the X icon just under Activity Monitor's red close button. You'll be asked if you're sure, and if you are, the process will be force quit for you.

It's not quite over

Most of the time, whatever has gone wrong is a fluke and the next time you run the app, it'll be fine. If it happens more often, you need to talk to the developer.

However, force quitting is not as neat and tidy as regular quitting is. Files may not be closed properly or the app may remain in memory, for instance.

The best thing you can do after force quitting an app is to restart your Mac.