AppleInsider
Posted: July 23, 2019 3:16PM
in iPhone
Apple's 2019 iPhone refresh will feature a new Taptic Engine, a report claims, with the updated version potentially geared towards furthering Haptic Touch, a reworking of 3D Touch that is expected to replace the older touch feature across all of the new models. 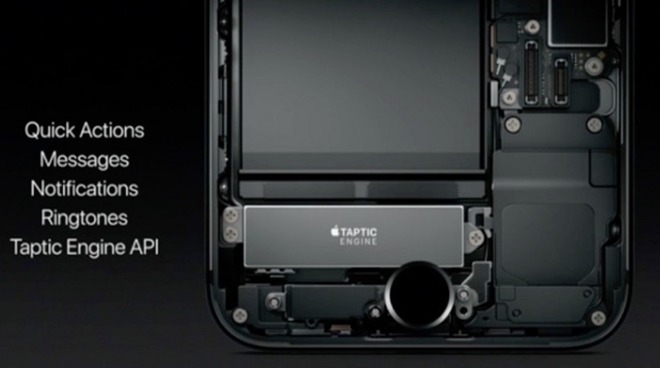 An Apple presentation slide showing the Taptic Engine in an iPhone

The Taptic Engine has been a long-standing feature of the iPhone for a number of generations, replacing an older linear actuator system with one that provides a wide array of different levels of vibration power and sensations. Over time, the Taptic Engine has been able to provide tactile feedback to the user when performing actions, and even mimicked the sensation of motion when pressing the static home button.

For the 2019 iPhones, it is claimed Apple will be introducing an updated Taptic Engine, allegedly under the codename "Leap Haptics." It isn't clear what new functionality the new Taptic Engine will provide, but sources of 9to5Mac propose it could have alterations that would make it more useful for Haptic Touch.

The report seems to correlate with a supply chain story from July 9, where it was claimed Apple may "remove 3D Touch sensors from all 2019 iPhone devices." In theory, switching away from 3D Touch would save Apple from having to include pressure sensitivity in its iPhone displays, reducing the complexity and cost of production.

For the 2018 iPhones, the iPhone XS and iPhone XS Max included 3D Touch, which allowed quick action menus to appear on the display when an app's icon is pressed down with more force on the screen. The iPhone XR left off 3D Touch in favor of Haptic Touch, a version that used the length of time of a press to trigger alternate actions, but did not bring up the small menus in its first iteration.

If Apple is to remove 3D Touch from all of the 2019 iPhones, it seems logical that Haptic Touch would be its replacement.
«12»