AppleInsider
Posted: July 24, 2019 4:04PM
in General Discussion edited June 2020
Microsoft's Surface Book 2 is very similarly priced to the new 2019 13-inch MacBook Pro that was just released. Let's take a look at which device has the features you need in a portable, mid-range computer in our hands-on Surface Book 2 vs MacBook Pro showdown. 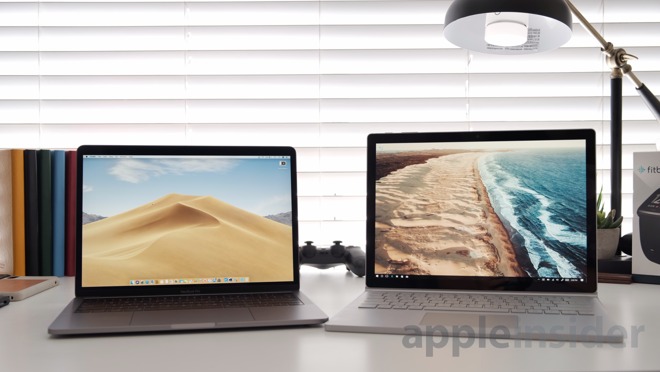 Apple has recently updated its 13-inch MacBook Pro in time for their back to school sale, upgrading to a T2 chip, True Tone display, and a butterfly keyboard. With the updated model now available, you may be wondering how it stacks up to other, similarly sized and priced computers. 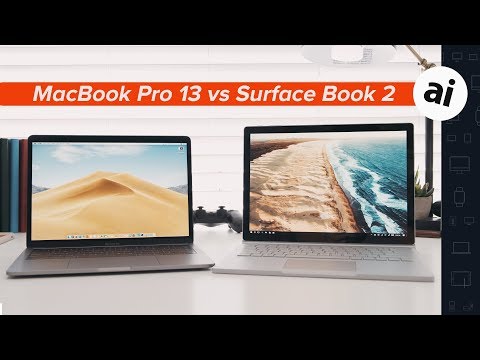 Unsurprisingly, the displays that Apple has put out for years have been impressive. The MacBook Pro features a 13-inch Retina display with a 2560-by-1600 native resolution at 227 pixels per inch. It's got a wide color display and features True Tone technology-- a feature that alters the color to match ambient room lighting while working to reduce eye-strain inducing blue light. The images look crisp and clean, and having a display that is actively looking out for the health of your eyes is a bonus. 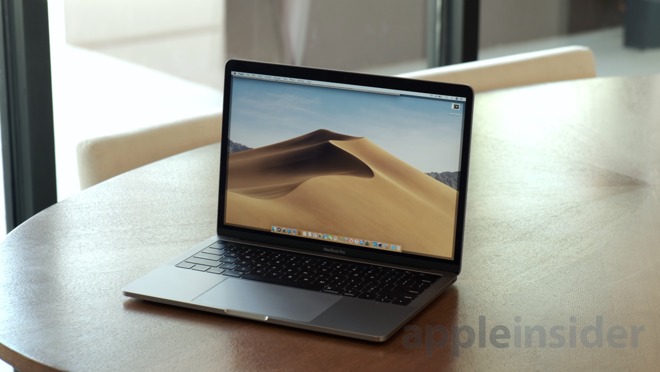 However, the Surface Book 2 has a great display in its own right. The 13.5-inch PixelSense display features a native resolution of 3000-by-2000 at 267 pixels per inch. The color output isn't quite as high as the MacBook Pro and it doesn't have a True Tone equivalent, but the Surface Book 2 does feature 10-point multi-touch and is compatible with the Surface Pen. 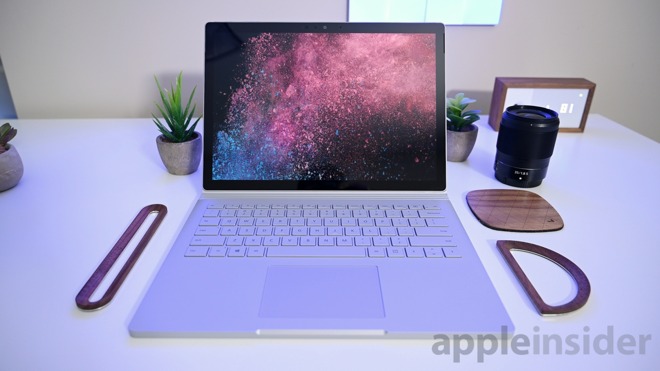 Overall, both computers have great displays and the choice will come down to personal preference or what you may need in the long run. If you prioritize a sharper image for extended reading, the Surface Book 2 might be the computer for you. If you need adaptive tone technology and want something that's going to better reproduce colors, you might want to spring for the MacBook Pro.

It's worth pointing out that at the configurations we're comparing, both models come with a 256 gigabyte hard drive and 8 gigabytes of memory, so buyers won't have to compromise there.

At the $1499 configuration, the 13-inch MacBook offers a 1.4 gigahertz quad-core 8th-generation Intel Core i5 processor, boasting a Turbo Boost up to 3.9 gigahertz. In single-core benchmark tests, the MacBook earned a 4794, and a 17125 in the multi-core benchmark test. 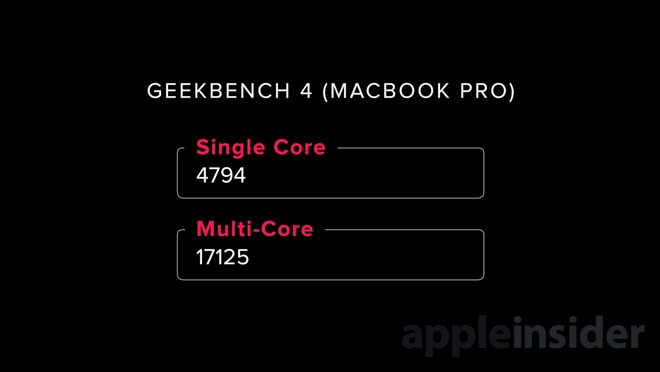 The currently discounted Surface Book 2 offers a somewhat less powerful 1.9 gigahertz quad-core Intel Core i5 quad-core processor with a max turbo up to 3.6 gigahertz. In single-core benchmark tests, the Surface Book 2 earned a 4464, and trailed behind the MacBook Pro with a 14213 in the multi-core test. 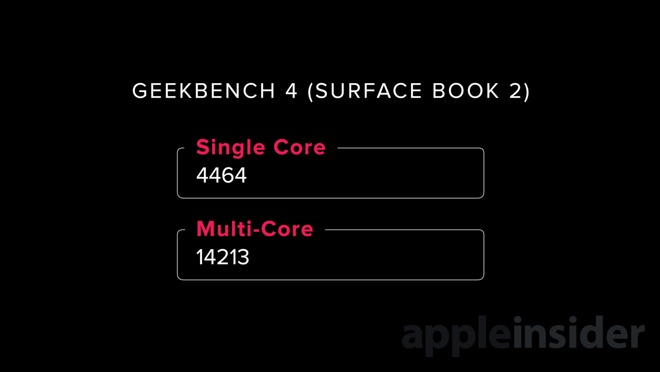 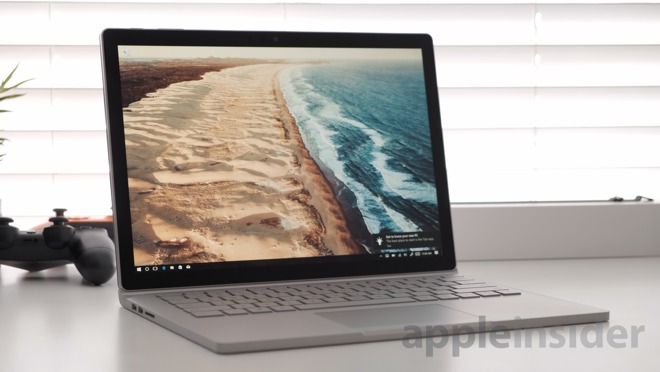 In our own Surface Book 2 vs MacBook Pro testing, the Surface Book 2 gets very, very hot -- and there are complaints across the internet about it doing so even during normal operation between heavy-lifting jobs. In the long run, this is something to keep an eye on, and minimize as best as you can.

The MacBook Pro is certainly a more powerful computer, and if you're in the market for something that packs a punch, it's your best bet.

Connecting and getting connected

The MacBook Pro comes with two 40Gbit/second Thunderbolt 3 ports capable of acting as both a port for charging as well as a DisplayPort in addition to functioning as a standard USB-C port. 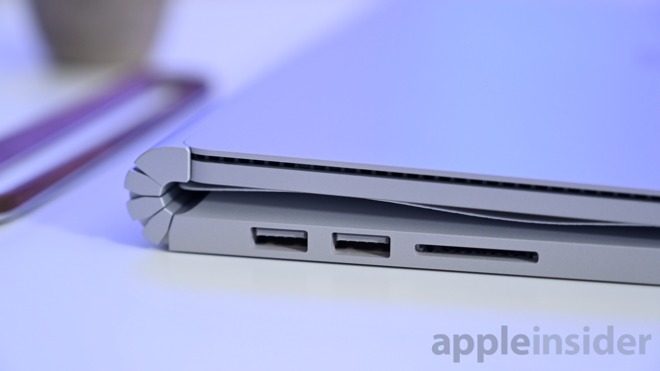 The Surface Book 2 has two USB-A ports, one 5Gbit/second USB-C port, and a full-sized SDXC card reader. More ports, less adaption, but nothing high-speed like Thunderbolt 3. 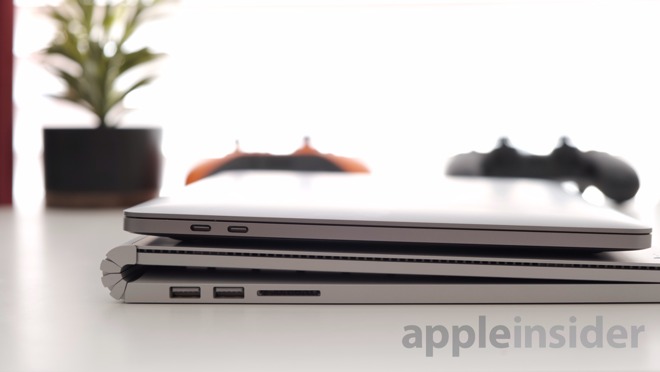 Both feature a 3.5 millimeter headphone jack. 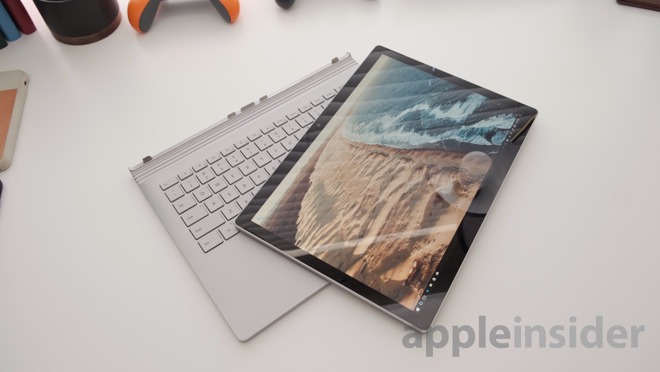 Surface Book 2 detached from its keyboard

If you're worried about portability, the Microsoft Surface Book 2 touts a 17 hour battery life, barring excessive touch-screen use, while the MacBook Pro is capable of about 10 hours.

In addition to the battery life being longer, the Microsoft Surface Book 2 is a tablet PC that can be disconnected from its keyboard. This gives it all of the advantages of a tablet, though only for somewhat lighter tasks. 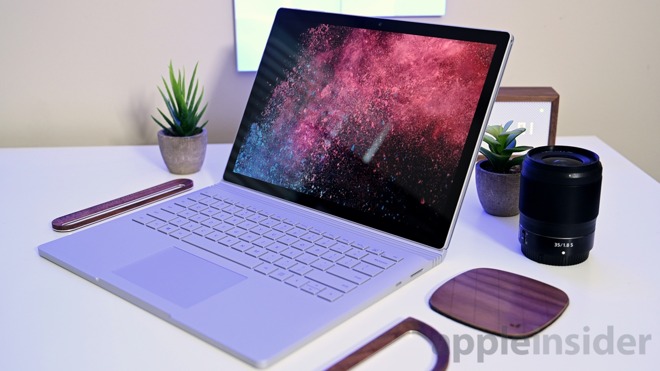 Both computers have their individual strengths, so ultimately the choice comes down to what features a user needs versus what they are willing to give up. If you need more raw power, we highly suggest going with the MacBook Pro, as it outperforms the Surface Book 2 in CPU and GPU tests, and maintains cooler operation overall. If you're looking for something that fufills both the role of a tablet and a PC, the Surface Book 2 may be just what you need.

We'll be doing a review of the Surface Book 2 in the coming weeks.

There's no need to pay full retail price for Microsoft's Surface Book 2 or Apple's MacBook Pro. Popular retailers, such as Amazon, Adorama, B&H Photo and even Microsoft itself are marking down Surface Book 2 models with triple-digit savings and bonus perks, such as no interest financing offers and even a sales tax refund in eligible states at B&H with its Payboo Credit Card.

On the Mac side, Apple's new MacBook Pro 13-inch is also on sale, with CTO models eligible for an exclusive coupon discount.

It's definitely worth checking out the AppleInsider 2019 13-inch MacBook Pro Price Guide when shopping for a new system for school, work or home to score the best deals and lowest prices on the current hardware. Our price comparison guides are home to the latest offers and product availability across top Apple Authorized Resellers. You can also find discounts on a variety of other Apple products, from iPads to Apple Watches, in our deals section.