AppleInsider
Posted: July 25, 2019 11:42AM
in General Discussion
Apple becomes the first technology company to take the top spot in an annual survey of solar energy usage in business, ahead of Amazon and Target. 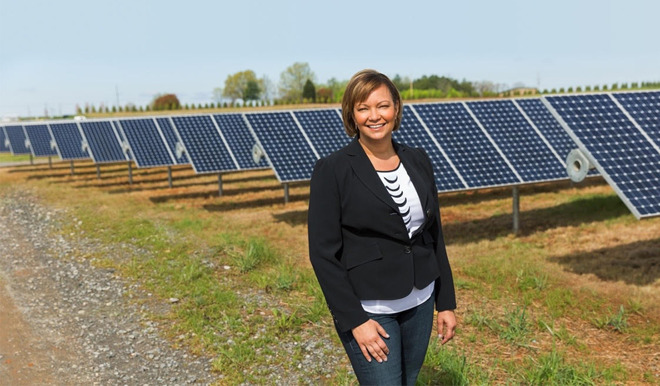 
Apple, Inc is the business with the greatest amount of solar energy capacity in the US, according to a new report from the Solar Energy Industries Association (SEIA). The organization has been charting the use of solar for the last seven years, and claims that never before has a technology firm come first.

"Counting both on-site and offsite capacity, Apple takes the top spot with 393 megawatts (MW) of solar installed," said SEIA in its report Solar Means Business, "marking the first year a company in the tech space sits atop the leaderboard."

Last year's top company, Amazon, which is now in second place, is strictly speaking a technology firm because of its AWS business, but counts in this survey as a retailer. Amazon has a total solar energy-generating capacity of 329.8MW and third-place company, Target, has 242.4MW.

"When global brands go solar," she continued, "the rest of the world takes note, and this report puts the power of corporate solar investment on full display."

While Apple announced in 2018 that its entire global operation is powered by 100% renewable energy sources, it specifically gained the top spot for solar because of what SEIA describes as "a 130MW off-site project that came online in California."

The report does not identify that project, but it's most likely to be the South Monterey installation from which Apple bought 130 MW to provide power to Apple Park.

On-site installations are ones such as Apple Park which feature solar panels on the building itself, while off-site ones are separate solar-collecting facilities such as the company's energy farm projects in Illinois and Virginia.

When ranked only by on-site installations of solar energy, SEIA puts Apple in fourth position, behind Target, Walmart and Prologis. Apple doesn't even appear in the top 25 when ranked by the number of solar installations, which is dominated by retailers who have very many buildings across the country.

Apple has yet to comment on the report, but SEIA will be presenting the company with an award during a Solar Goes Corporate ceremony on November 7, 2019.
«12»