AppleInsider
Posted: July 29, 2019 4:00PM
in General Discussion edited June 2020
Apple says the T2 is a security chip, and if all it did were keep your data more secure, it would be worth it. Yet this little processor does so much else, and it has a startling effect on performance. 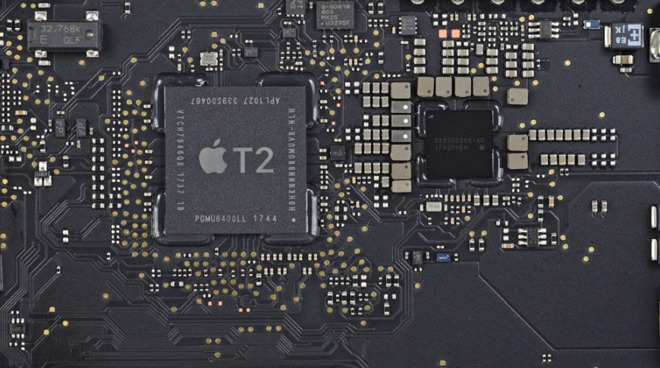 If you spent any time looking into which Mac desktop or notebook to buy before you paid out for a shiny new machine, you'll have seen Apple's website extolling the fact that many of them have T2 security chips. That's nice. Only, it's more than nice, it's more than a way to invisibly secure your Mac, it is a process that has a dramatic and visible effect on just about everything you do.

It's visible enough that the lack of a T2 chip is just about the only reason we would hesitate over buying a regular iMac right now. The iMac Pro has always had a T2 chip and now every other currently-shipping Mac has it, but the iMac doesn't.

That's an odd omission and one that will surely be corrected at some point, though. Eventually, all Macs will have this T2 or a descendant, and while we've had to wait for T2 to make its way across the range, it's been mostly worth the wait. 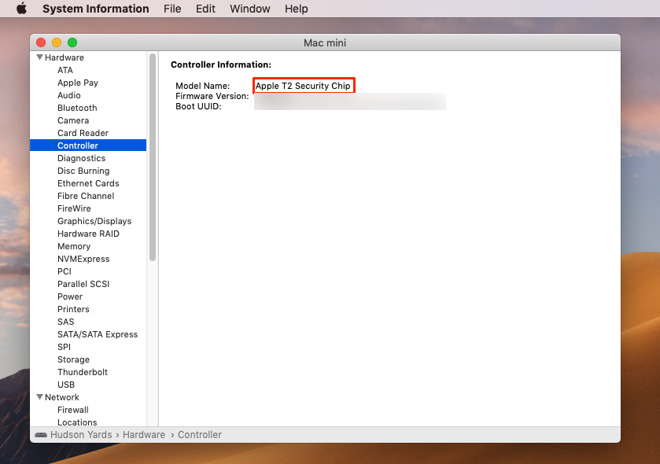 To find out if your Mac has T2, hold the Option key as you click on the Apple menu. Choose System Information and then click on Controller.

What's so good with its security

The Apple T2 Security Chip is a separate processor that for some aspects of operation sits between whichever main Intel processor your Mac has, and macOS.

It sits there to ensure, first of all, that nothing can ever get loaded onto your machine without you explicitly wanting it to. The T2 chip provides a secure boot, which means that the only things that can run at start up is trusted, approved macOS software.

This prevents malware getting its hooks into your Mac when it starts up, and the T2 chip also takes care of security once it's running.

For instance, built into it is a dedicated Advanced Encryption Standard (AES) hardware engine. This makes sure the data on your storage drives is encrypted and because it's done in hardware, there's no hit to the speed of your Mac as macOS reads and writes data.

This business of having a secure boot and storage encryption in the hardware extends to one more piece of security that changes how we buy things online. It is because of the T2 chip that MacBook Air and MacBook Pro can have Touch ID just as iPhones and iPads do. 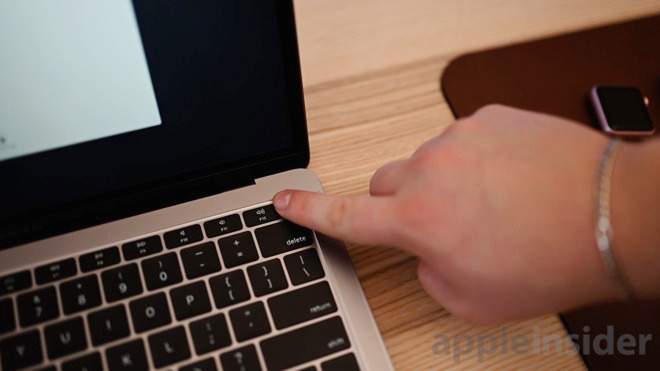 The T2 chip maintains a secure enclave where your identifying fingerprint data is stored. When an app or online service needs to know you really are you, it asks you to put your finger on the Touch ID sensor and then it asks the T2 chip. Is this new fingerprint, whatever it is and whoever it belongs to, the same as one in your secure enclave?

Apple's T2 processor can then say yes or no. Without giving away any of your data, it has securely confirmed your identity and you can carry on with your payment.

Watching out for you

There's one more security feature the T2 chip brings that doesn't get appreciated because it doesn't tend to get noticed. If you have a MacBook Air or MacBook Pro with a T2 chip and you close the lid, the T2 chip switches off the microphone.

You don't notice it because you just closed the lid, you're not thinking of using the microphone. Yet malicious apps could have turned it back on and be listening to your every word -- except now they can't. The T2 disables the microphone in hardware so that no software can switch it on.

The chip doesn't bother doing the same thing for your camera because let malicious apps turn that on, they won't see anything as you've closed the lid.

What else is so good?

Security like this must be the heart of the T2 chip, as it's even in its full name, but Apple has leveraged it to provide other advantages. While you can't see that a secure boot has kept you safe and you may never even notice that your drive storage has been encrypted automatically, you will see and hear several differences because of this chip.

The T2 chip includes an audio processor that is meant to contribute to an overall superior sound quality, compared to Macs without it. In practice, though, musicians have reported problems. 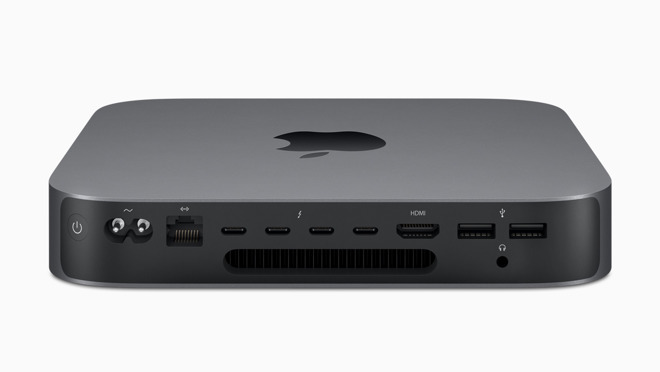 Mac mini has T2, but it can't use the chip's "Hey, Siri" or Touch ID features because it lacks a built-in mic and keyboard

Then Macs with the T2 chip -- with one significant exception -- are not just playing audio, they're listening out for it too. Unless you have a 2018 Mac mini, these machines are always listening for you to say "Hey, Siri."

Not only do they listen out for this and if you say these words, then listen for a Siri command, they also do so very quickly. The facility to say the trigger phrase and then the responsiveness of these machines means you're now able to use Siri as freely and easily as you do on iOS.

Exploiting the fact that to do its security work, the T2 needs to be this completely separate processor, Apple gives it other work to do that frees up the main CPU.

It processes audio, for better or worse depending on your use case and external hardware, but you'll also see a marked difference in some video encoding jobs. It's specifically meant to help with FaceTime and it improves on face tones, auto exposure and so on.

What Apple does not mention in its official T2 security documentation is that video encoding is also faster with T2.

In trying to document it precisely, we found there were multiple factors and what you saw depended on what video software you were using.

However, the difference could be in the order of many minutes. Using the right settings, a T2-enabled Mac will typically encode video significantly faster than a machine without it.

Not to over-emphasize this, but it's the T2 chip that means you can be better off buying a 2018 Mac mini than a lower-end 2013 Mac Pro for equivalent pricing. Seriously. That doesn't hold true when you're looking at Mac Pros with more cores, but for price/performance, the new low-end Mac beats certain versions of the old high-end one.

For over a decade, enthusiasts have been shoe-horning macOS on off-the-shelf hardware. What results is a PC running macOS, but with little support from software vendors, and obviously none from Apple itself.

It is possible that Apple could require the T2 in the future to run macOS at all. But, given that the latest iMacs don't have a T2, that day is five years away -- and maybe more.

And as far as repair goes, there was a revelation that the T2 could prevent repair by third parties requiring a part registration similar to what's required when something involving Touch ID is replaced on an iPhone. However, at present, at least, this isn't the case for repairs outside of Touch ID. 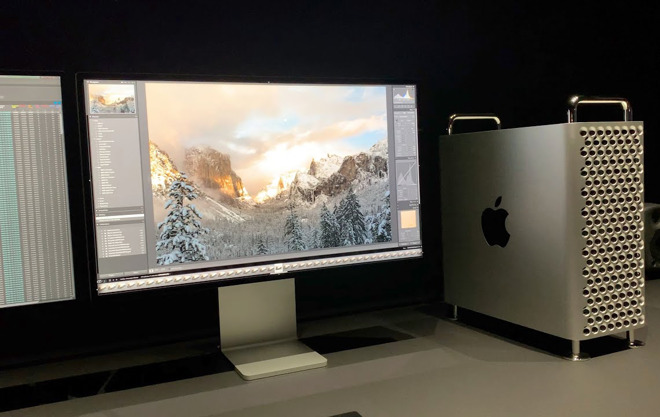 What it definitely won't have is Touch ID and, effectively, "Hey, Siri." Right now the Mac mini doesn't have either of these, because like the forthcoming Mac Pro, it lacks a keyboard and a microphone.

That should be enough to mean that neither machine will ever be able to listen out for "Hey, Siri," but it's complicated. According to Apple's documentation, you should be able to plug a microphone into a Mac mini and the T2 chip will then listen. That's not been the case in our testing, yet what has been the case is that when you have AirPods 2, they can work.

Presumably the Mac Pro 2019 will be the same, but it is peculiar that the most expensive Mac needs you to also buy AirPods to make a tentpole Apple feature work.

It's also interesting, though, to speculate on whether this is a clue to whether we'll ever see Touch ID keyboards for the Mac. The T2 chip is literally all about security, and it needs hardware access to the microphone to disable it, yet it's allowing "Hey, Siri" access over the AirPods' Bluetooth.

Perhaps it's the combination of receiving data via Bluetooth but that data matching up with the AirPods already paired to the system. If that's how the T2 chip can get around the security issues of using Bluetooth, maybe we'll see a keyboard some day that uses a similar idea.

That's entirely speculation, so for now, all we can say is that there are T2 benefits that we would love to have across the entire Apple range, but at least we can be grateful that over time, every Mac is getting something.