How to use the App Store on Apple Watch

AppleInsider
Posted: September 25, 2019 11:45AM
in General Discussion edited October 2020
It's the App Store, but not quite as we know it. Here's how to use, and just what you can find, on the new App Store for Apple Watch in watchOS 6. 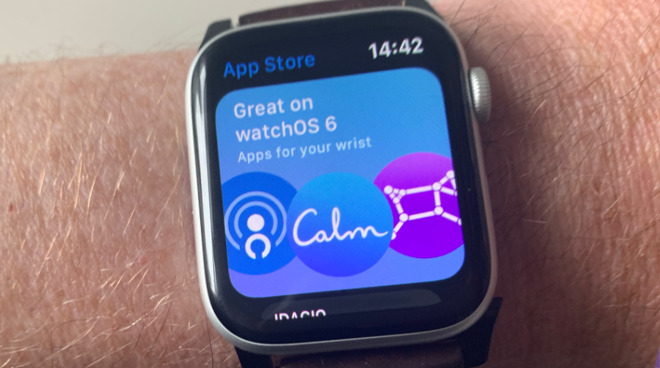 Just as with the iOS version, the App Store on Apple Watch opens with a curated Today selection

If there's one thing that says Apple is serious about making the Apple Watch an independent device, well, it's that app developers no longer have to concoct iPhone companions for them. They can make an app that works and exists solely on the Apple Watch.

However, if there are two things that say Apple is serious, then the other is the introduction of the App Store to the Watch. From now on, you'll be able to buy those Watch-only apps directly on your Watch.

"You can browse apps curated by our editorial team," explained Kevin Lynch, Apple's vice president of technology, at WWDC 2019, "You can search the full App Store using dictation or scribble, or just asking Siri."

In practice, though, using the App Store on Apple Watch is quite a different experience to using it on iPhone or iPad.

This is the App Store

One thing to note is that the App Store on Apple Watch is the same App Store that's been so successful on iOS. It's not a separate one, like the Mac App Store, which has been less of a hit.

Any app you buy on your Apple Watch will show up in your Purchases in the App Store app on any of your iOS devices.

Similarly, any app you buy on your iPhone or iPad will show up on the Apple Watch. Which means that you have full access to anything you've bought, and you can delete and re-download right there on the Watch.

Or rather, you can see any app you've ever bought, if it works on the Apple Watch.

This is the App Store with a big filter on it. You can see that same filter on your iPhone, too. Go to the Apple Watch app, tap on App Store, and you get a page telling you about it.

That page includes a button called Discover Watch Apps on iPhone, and if you tap that, you are taken into the App Store to be shown only apps that work with the Watch.

The first time you buy

You might think that since you had to use your passcode when you put on your Apple Watch, that the biometric sensor would know it's you. And it does. Whenever you want to buy an app from the App Store, you can do it by entering your passcode -- except the first time.

The very first app purchase you make on your Apple Watch requires you to enter your full Apple ID password.

Once you find an app, tap on it to see the details, then tap on the price to buy it.

That could be a bit of a problem with scribbling, but you are immediately prompted to enter it on your iPhone instead.

And not only is this solely for the first time you buy, thereafter we can't even find a way to sign out of the account again.

When you open the App Store on Apple Watch, you get a version of the same Today view on the iOS version. Apple highlights some apps and they're all curated by human beings instead of algorithms.

There's not a lot here, though, and you'll soon be tapping into the Search box to start looking for more.

Search works via scribbling, which seems unlikely to be used all that often unless the app you want has a very short name, or dictation.

Dictation has all the limitations you'd expect, and you do sometimes have to repeat it in order to get it to recognize what you want.

When it does, though, you get a list of all apps that match and that work with Apple Watch.

Tap into any app and you will see all of the information you expect from the App Store, right down to screenshots of the app in question. They're solely the Watch screenshots, you can't switch to seeing the iPhone or iPad ones, but you typically get five that you can swipe through.

If you also tap on any of the five, it expands to fill the Watch screen as the app would. Tap Done to go back to the app description.

That description will be as extensive as it is for the iPhone version, and there is a lot of detail to scroll through.

Searching for an app, and then seeing all of its details including screenshots

To buy, though, you just tap the top button that shows the price. You'll be shown an information screen and have to quickly press the Watch's side button twice to confirm you want to buy.

To find a particular app that you know you've already bought and that definitely also has an Apple Watch version, you can search your previous purchases. Scroll down to Account at the very bottom of the screen, then tap on Purchased.

If you use Family Sharing, then you'll also need to tap on your name. After that, though, searching previous purchases works exactly the same as looking for new ones.

Looking to the future

It's still easier to search the App Store on your iPhone, especially now that when you go via the iOS Apple Watch app, you can see the same filtered results.

Browsing on the Watch isn't yet a great experience, but that may change if more developers come to the Watch and thereby make your searching more productive.

As it is, this is chiefly a way to attract developers right now. It works for us, but it's going to take some great apps, well curated and displayed, for the App Store to take off on Apple Watch.