AppleInsider
Posted: September 25, 2019 5:36PM
in General Discussion edited September 2019
Amazon has used its special event to launch new Alexa-powered devices in the Echo range, including the Echo Studio speaker, a refreshed Echo, and the Echo Dot with Clock. 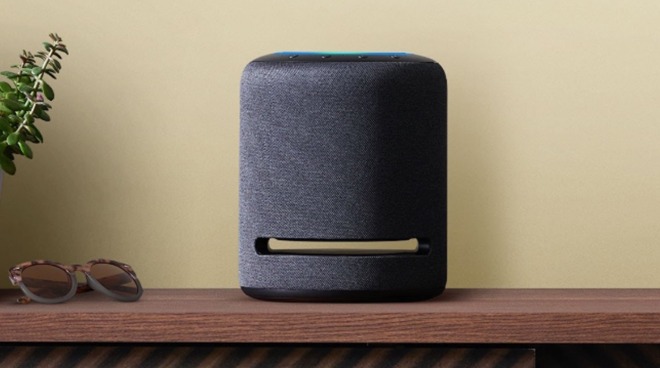 Amazon's "Echo Studio" is a jumbo-sized addition to the Echo smart speaker range, and offers the same core functions as the rest of the device family. Just as usual for an Echo, users can ask Alexa questions and requests, which are then carried out or answered by the speaker itself or connected devices.

For this interpretation, Amazon seeks to improve the audio quality to offer a higher-quality sound, bringing it into the same territory as the premium Apple HomePod. To facilitate this, Amazon has included three midrange speakers for the left, right, and top, with a directional tweeter at the front, and a 5.25-inch bass driver in the base feeding sound out of the bass port.

Supporting 3D audio and Dolby Atmos, Amazon calls it the "most innovative speaker we have ever built." The unit also borrows the idea of automatic tuning of audio to match the room from the HomePod, which can further help with sound quality. 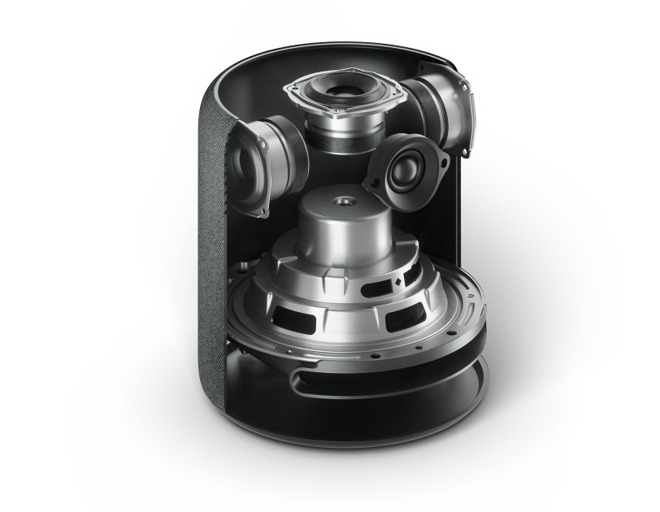 An internal shot of the Echo Studio

Framing it as the main central speaker of the home, with other Echo devices as tertiary offshoots for less-important rooms of the house, Amazon is trying to enmesh the Echo collection further with smart home setups. While Apple has its HomeKit system for smart home device connectivity, Amazon's existing Alexa-based system continues to be a major force in the field, and the new device helps Amazon fill out the home network by plugging the premium audio gap currently serviced by the HomePod.

Since Amazon's Echo lineup is dominating the low and mid-tier smart speaker market, it makes sense for Amazon to make a play for higher tiers.

Amazon did not advise of when it will ship, but did confirm it is available to preorder today, priced at $199.99.

Revising the original product in the Echo range, the main "All-New" Echo is similar to the existing model, consisting of a cloth-covered smart speaker with Alexa capabilities, but with some new color options. 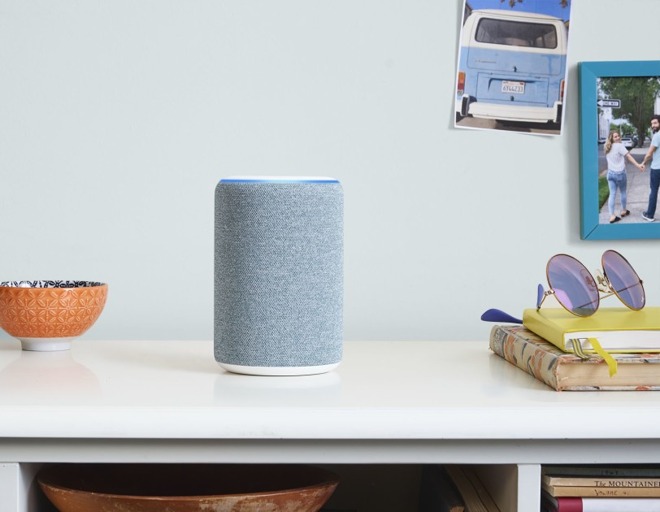 In this refresh, Amazon is focusing on improving the audio, by adding the neodymium drivers and other speaker hardware included in the Echo Plus into the normal version. This should improve the audio for users, but it remains to be seen whether it will reach HomePod levels of quality.

Following the launch of the Echo Show 5 from July, Amazon is extending the range to include the Echo Show 8 alongside the 5 and the original Echo Show. As the name suggests, it includes an 8-inch HD-resolution display, as well as borrowing the audio system from the Echo Show. 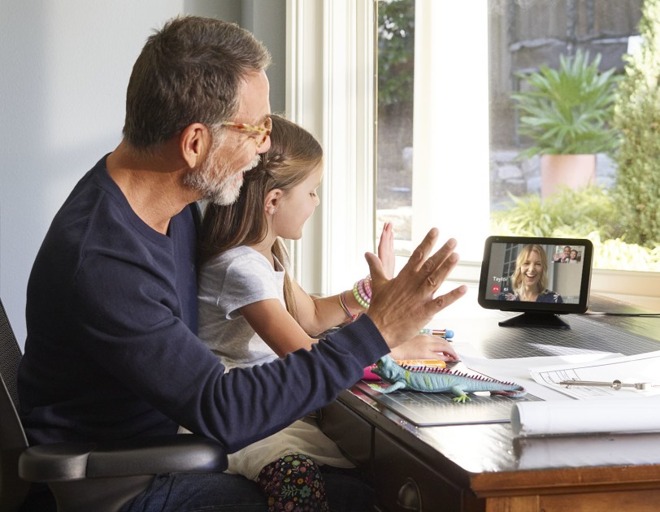 Just like the Echo Show 5, Amazon has included the privacy-focused camera shutter, which lets users manually prevent the device from using the camera with a physical block.

Offering a combination of the Echo Dot with an alarm clock, the Echo Dot with Clock is just that. Taking the appearance of the third-generation Echo Dot with the fabric surround, the updated version includes a segmented illuminated LED clockface that shines through the side. 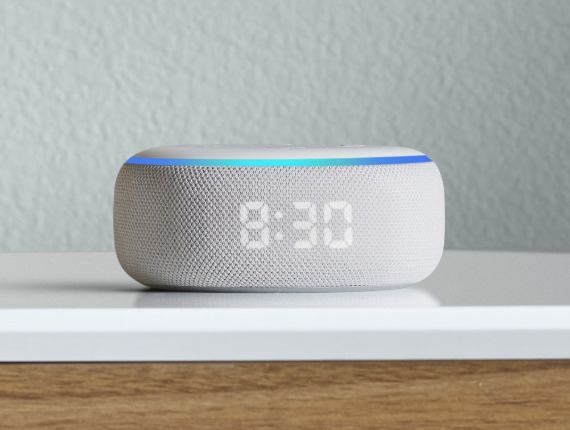 Aside from the clock feature offering a nine-minute snooze, the device is pretty much a regular Echo Dot in form and function. The extra display will be used for the time, timers, and to show the local temperature.

Amazon is opening preorders for the Echo Dot with Clock from today, priced at $59.99. The existing Echo Dot will continue to be sold, albeit without the extra visible clock.

More an accessory to the Echo range than a main device, the Echo Glow is a multi-color smart lamp that pairs with Alexa. Serving as a nightlight, users can ask Alexa for it to be turned on and off. 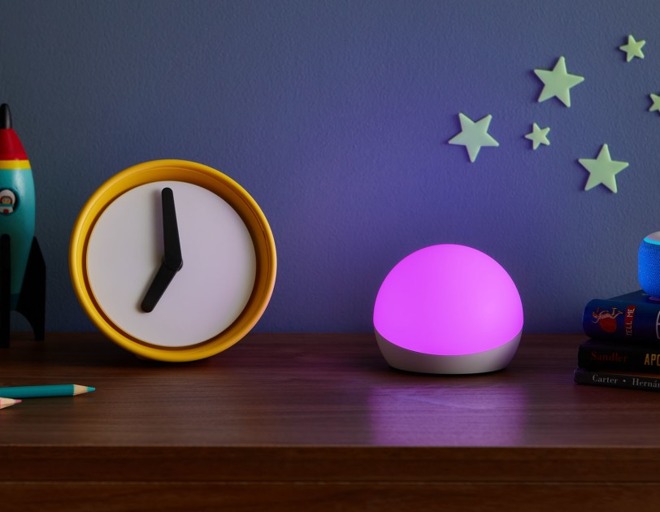 It is also possible to make it cascade through a variety of colors, flicker like a campfire light, function as a disco light for parties, and to slowly dim using a Sleep Timer.

The Echo Flex is a compact Echo unit that resides in a power socket, rather than being a freestanding device. Amazon admits the speaker isn't high quality, but is tuned to work with Alexa's voice, with the device capable of answering the usual Alexa queries. 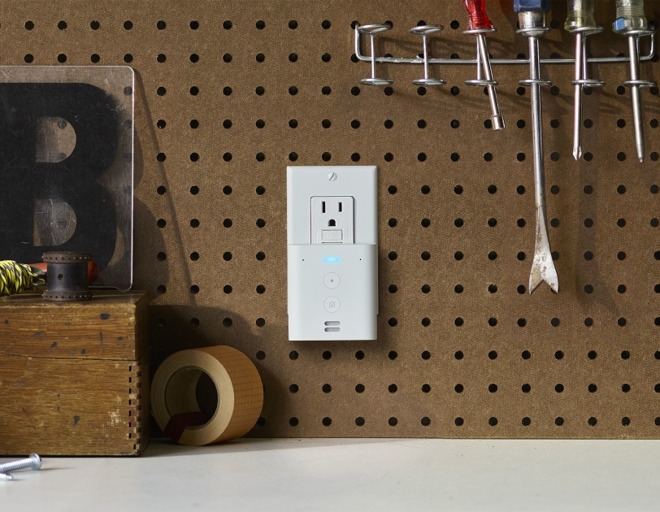 The main element of the Echo Flex, aside from its size, is the built-in USB port, which can be used for recharging a smartphone or other device. More interestingly, as it has an interface API currently undergoing development, it could be used to connect to extra accessories in the future, such as a motion sensor, which can influence other network-connected devices.

The Echo Flex is available for pre-order starting today, priced at $24.99. Future accessories are tentatively priced at $14.99 each.
«12»