Apple's self-driving car could hide radar system within the bodywork

AppleInsider
Posted: October 15, 2019 12:24PM
in General Discussion edited November 2019
A future Apple-designed self-driving vehicle may not show any external signs of its automated functionality, with Apple looking into how radar systems could be made smaller, lighter, and cheaper in a bid to hide them from the view of other road users looking at the vehicle. 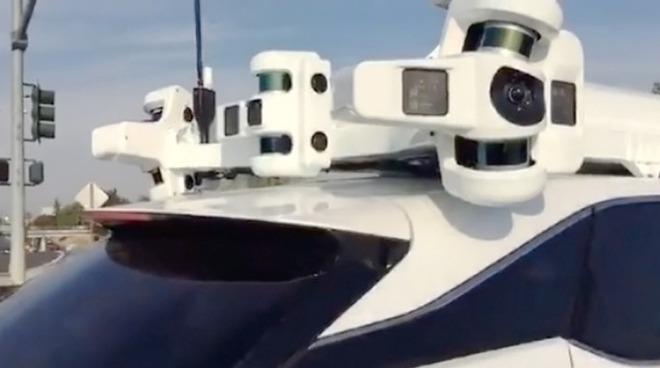 A sensor array on top of an Apple self-driving car

It is relatively easy to spot vehicles that are being used for testing of self-driving capabilities on the road. In many cases, including Apple's own fleet of test vehicles, there is a plethora of sensors mounted to the top of the car, monitoring the front, rear, and sides of the car for the onboard computer system to analyze for future driving decisions.

As well as being a fairly obvious element of a car that other vehicles do not typically use, radar systems, LIDAR, and other sensors are also relatively bulky, heavy, and costly items to affix to a vehicle. Aside from making it hard to integrate the elements within a car body in a fairly hidden way, the expense also pushes up the price of a vehicle that integrates the components, making it less desirable by potential owners.

In a patent granted to Apple on Tuesday titled "Radar system including dual receive array," Apple aims to solve part of the problem by making a radar component that is small, lightweight, power-efficient, and cheap enough for mass production.

In Apple's design, it suggests the use of antennas to transmit a radar beam towards a portion of a field of view, along with a vertical antenna array to receive the bounced-back signal. The receive antenna array can consist of multiple antenna elements grouped into sub-arrays, with each sub-array used to receive scatter signals reflected back at it from a smaller subsection of the field of view.

Circuitry is then used to combine the received scatter signals from the antenna array into a combined scatter signal, which is then digitized. A second horizontal receive array performs a similar job, again with sub-arrays and the same process.

A signal processor is then used to process the scatter signals from both vertical and horizontal arrays, and to correlate the data from each to give effectively a 3D radar layout.

Apple's proposals also include using a patch antenna, details on receive antenna positioning relative to each other, the use of beamforming circuitry to refine reception and transmission, the use of a phase-shifter, and methods of processing the signal data. Two-dimensional phased antenna arrays could be used as a third antenna, which makes for the possibility of sub-arrays switching between detecting different portions of a field of view. 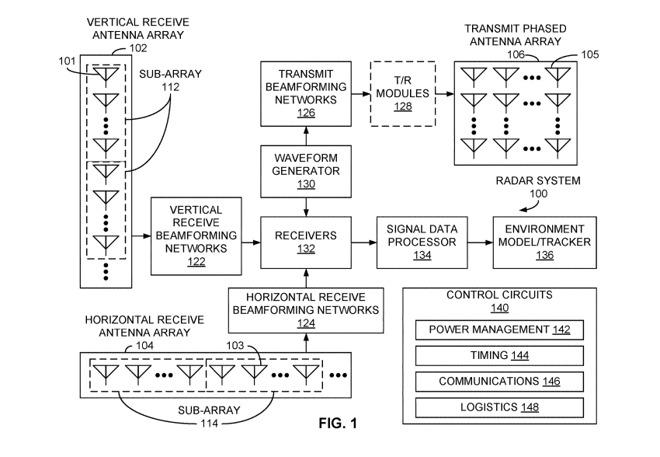 Apple's example of a dual-array antenna system for radar

By relying on circuits for the collection and modern processors to work on the data itself, the system could be used to make a relatively cheap three-dimensional radar, with relatively small components that could easily be hidden within the body of a vehicle.

Apple files numerous patent filings on a weekly basis, but while the existence of a patent is a sign of areas of interest for the company, it isn't a guarantee that Apple will be using the concepts in a future product or service.

Apple is widely believed to be working in the automotive field under the code name "Project Titan," which covers Apple car-related areas including design and self-driving systems.

In autonomous driving specifically, Apple has filed quite a few patents, including one where a central computer system or remote driver would be able to take control of a self-driving car to take an injured driver to a destination, possibly as part of a health-related emergency.

More directly, a May patent relating to depth perception sensor data processing describes how a confidence system could perform selective processing on data. In theory, the system would use a first wave of data to determine areas to concentrate more resources on for the second wave, such as a detected road obstacle, potentially saving further resources for other areas.

Patents for skid recovery and automatic recovery systems also exist, where the self-driving car detects when it is moving in unexpected ways by monitoring the movement of the ground. There is also a patent application from 2018 where a self-driving car adapts how it drives based on how much stress the passengers are undergoing.