Adobe Fresco vs Rebelle 3: Which tool is better for artists and why?

AppleInsider
Posted: October 20, 2019 6:47PM
in General Discussion edited August 2020
Adobe's recently released Fresco promises to emulate traditional media right from the comfort of your iPad. We compared it against EscapeMotion's Rebelle 3, a desktop application that has been bringing traditional artists to the computer since 2015. 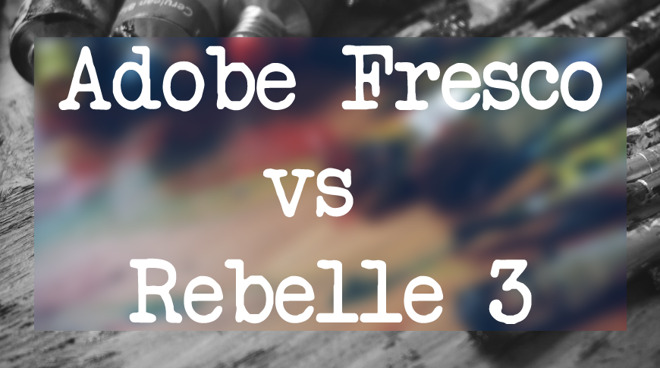 If you're a traditional artist, getting into digital art can be a bit tricky. This is especially true if you want your work to look like traditional media.

Creative software giant Adobe recently released Adobe Fresco -- an iPad app designed to be quick and easy to use. Fresco also has an impressive battery of AI-driven tools that emulate traditional media. Adobe's goal was to create an easy to use creative program for users of all skill levels.

So, let's pitch Rebelle 3 versus Adobe Fresco to see where each app's strengths and weaknesses lie to give artists an idea of which program may better suit their needs.

Ease of use & user interface

The one thing I've always liked about Rebelle is that it is pretty easy to pick up and use, regardless of your experience with digital painting software. 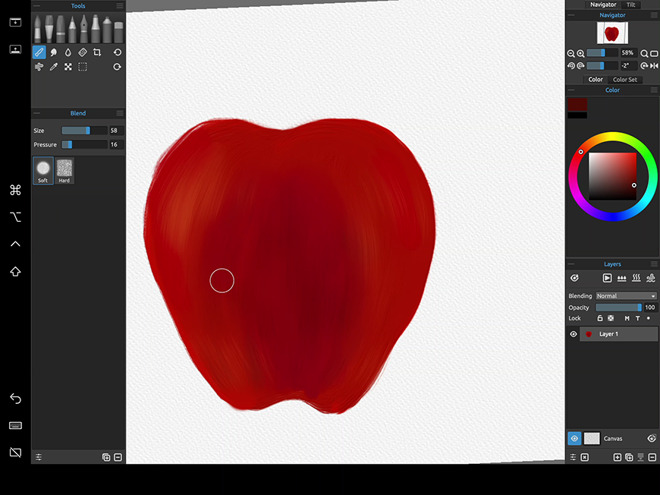 Rebelle feels like it was designed for traditional artists who may have no experience with digital painting. Rather than language you'd see in a digital art program, the words they choose are the words you'd describe traditional media. You control how much paint and water your brush is loaded with. You control how much pressure is set as your default.

I've always felt that this was the strongest argument for Rebelle. Traditional artists and digital artists alike should be able to easily pick it up and use it without much effort. 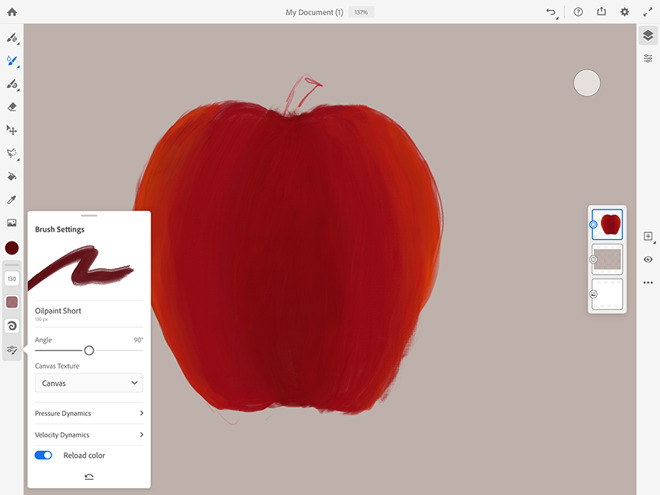 Fresco is fairly easy to use. It has a pared down interface that you'd expect to see in an app that was designed for the iPad, which I'm counting as a bonus. Adobe said they wanted to create a program that gave everyone the ability to create, and I think that they did a good job here.

It doesn't feel intimidating, and if you're just sitting down to indulge yourself in some creative time, you shouldn't have too much of a problem getting started.

As an added bonus, Fresco uses the same shortcuts that Procreate uses. If you're familiar with the two finger tap to undo or press-and-hold for the eyedropper tool, you'll be able to pick up Fresco in a matter of minutes, if not seconds.

Rebelle 3 adds in the ability to import your own brushes, though there doesn't seem to be a booming after-market or community designing their own the same way that there is for Adobe Photoshop or Procreate. This is likely because there are far fewer brush options, meaning that custom effects are somewhat limited. However, if you do want to make your own brush shapes, you can import a PNG into Rebelle and it will work as a brush.

Adobe Fresco allows you to import any standard Photoshop brushes. Additionally, Adobe has created several packs of free brushes that anyone with a Creative Cloud subscription can import into Fresco, which gives tons of options for those who may need more choices than the stock program offers.

Fresco also gets a point for having vector brushes, which give designers the ability to create infinitely-scaleable artwork. Most casual users probably won't need this feature, but it's nice to see it included.

Where Fresco loses points is in the tool customization options. There's not a lot of clarity about what settings actually do to your physical brushes, especially when it comes to watercolor. It took me a significant amount of playing around to figure out what each setting did. Truthfully, some of them still elude me. 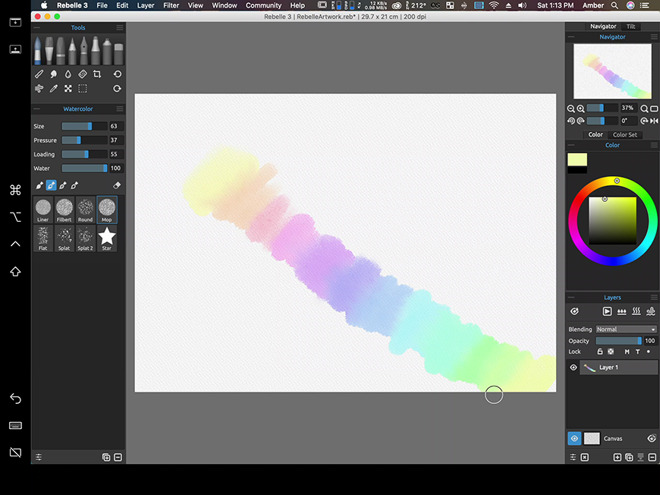 If, like me, you are a traditional watercolor painter, Rebelle is the closest thing you're going to get to real watercolors. I don't know how they did it, but Rebelle feels like painting with real watercolors. This is both a boon and a curse, as it's easy to accidentally bleed colors together if parts of the canvas are still wet. Still, you get some of the best blending in a digital program. 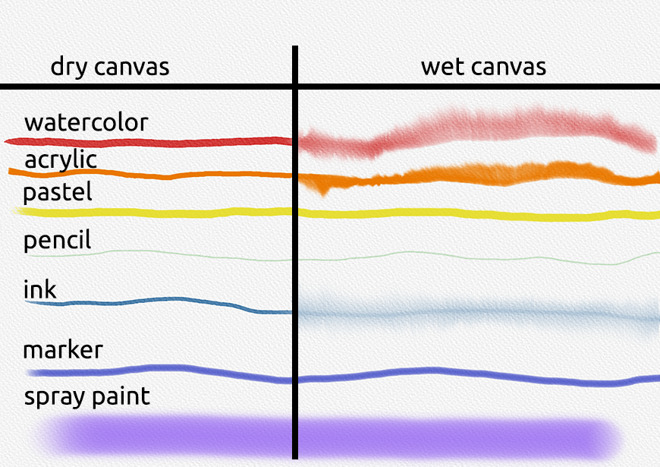 All of Rebelle's wet tools work well. The acrylics are thick, but blend well together without much effort. Inks work well and realistically bleed when they hit a patch of wet canvas. 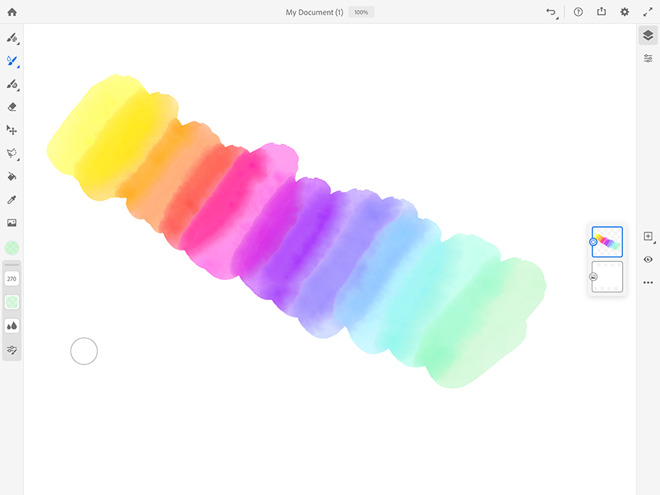 Fresco's tools are nice, too. The watercolors make use of the Adobe Sensei AI engine, the paints behave a lot more realistically than brushes that don't use any AI learning at all. While they're not quite as realistic as Rebelle's, they are much faster than Rebelle's brushes.

Fresco's oil paints are nice. They feel appropriately thick and goopy, and depending on your settings, can blend really well into each other.

A small sampling of Fresco's tools

As far as other brushes go, they're pretty standard. Fresco is made by Adobe, so if you've used Photoshop brushes, there won't be any surprises here. 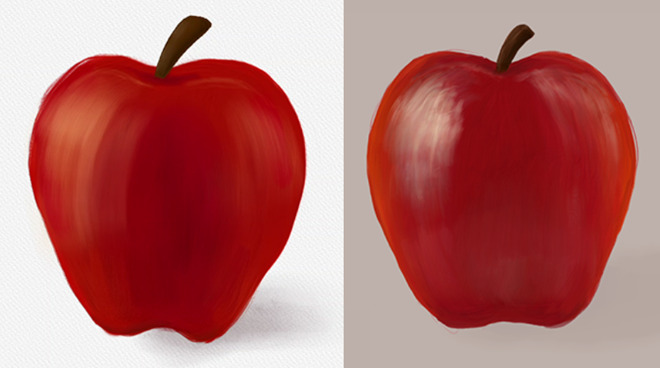 In order to test the two programs head-to-head, I had to pick something that both programs should feasibly be able to do. Rebelle and Fresco aren't one-to-one substitutes for each other. However, there's a fair amount of overlap in certain areas. So, this time I picked comparing Rebelle's acrylic brushes to Adobe Fresco's oil brushes.

I painted two apples for this test-- one in Rebelle, and one in Adobe Fresco. I picked apples because nearly anyone who has taken a beginners art class has painted an apple, and it's something that I can paint with acrylics in about 10 minutes.

While painting in Fresco, I appreciated the speed at which I could lay down the oil paints. These brushes have no lag and process essentially instantly. I found that I could easily block in my colors and blend them in seconds. Rebelle is a bit slower, though less so for acrylics than watercolors.

I found that I liked the overall shape of Fresco's brushes better. I feel like the bristle pattern helped to create a more realistic looking apple.

On the other hand, I found customizing the brushes far easier in Rebelle. I knew what every setting did and didn't have to spend a lot of time fidgeting around to see any minor changes.

Ultimately, I was able to paint an apple with both programs, and the differences are negligible. Rebelle felt more like traditional media, but Fresco was a bit quicker to deal with.

Which should you choose?

Ultimately, both are great programs, so it's going to come down to what you're looking to do. Rebelle has a superior watercolor engine and is likely more accessible to traditional artists who are looking to go digital.

Fresco offers significantly more features and is probably more beneficial to someone who designs for a living. The ability to have realistic traditional media style brushes coupled with vector brushes is a boon to designers and illustrators.

If you have an iPad and primarily design there, I suggest Fresco. I thought Rebelle worked okay with Sidecar, but it works better with a Wacom tablet.

Rebelle is available for PC and Mac, costs $90, and can be purchased directly from Escape Motions.