AppleInsider
Posted: October 23, 2019 12:37PM
in iPhone edited October 2019
Apple has increased its presence in the five most important European markets against Android, a study of smartphone OS data reveals, with the international use of iOS rising on the strength of the iPhone 11 and iPhone 11 Pro. 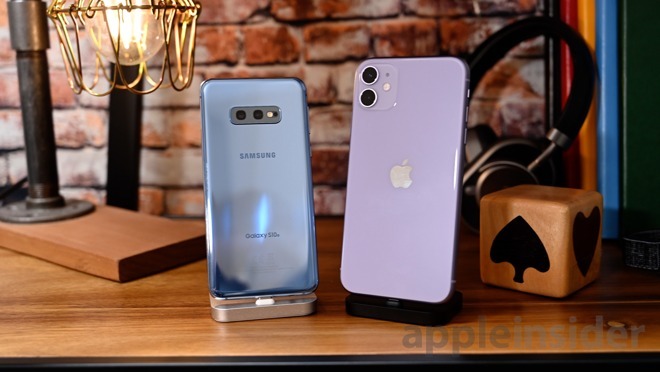 In the latest Kantar smartphone OS data study for the third quarter of 2019, iOS appears on 18.9% of all smartphone sales across France, Germany, Great Britain, Italy, and Spain, a 2% increase year-on-year. At the same time, Android's market share across the five markets fell 1.5% to 80.9% of the total, while other operating system usage contracted from a 0.7% share to 0.2%.

On a country-specific basis, the biggest percentage change was observed in Italy, with iPhone gaining 3.6% of the market over its proportion from the third quarter in 2018. The lowest rise was in Great Britain, with iOS rising 1.5%, but that market also had the highest existing penetration of iPhones, with iOS having a 34% total share over Android's 65.7%.

Apple's main smartphone rival Samsung saw gains in the five EU markets, enjoying a 5.9% year-on-year rise to 38.4% of the market for Q3 2019, and its highest European share since Q3 2015. This has been driven by sales of its A-series devices, which are said to take up five of the top ten best-selling models in the region.

Kantar's data relates to the number of devices sold, without taking into account the cost per unit nor the overall revenue. In effect, one sale of an iPhone 11 Pro Max is worth the same as a cheaper Samsung A-series device, despite the massive price disparity. 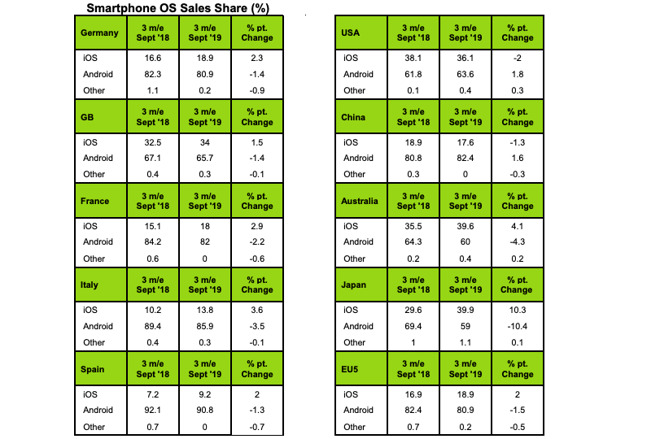 The quarter's measurement included just a week of sales of the iPhone 11, iPhone 11 Pro, and iPhone 11 Pro Max, advised Kantar global director Dominic Sunnebo, but they still contributed 7.4% of overall iPhone unit sales in the quarter, up from 6.6% observed for the 2018 models. Of the current models, the iPhone 11 is deemed to be in the lead in "absolute terms," but the Pro range are not far behind.

"In the US the model split of sales for the new iPhones is similar to the EU, though the overall contribution to Apple's total iPhone sales in the quarter is notably larger at 10.2%," said Sunnebo.

"The pendulum continues to swing towards homegrown Chinese brands," Kantar advises, "who accounted for 79.3% of sales in the Chinese market. Huawei and Honor combined made up 46.8% sales share, maintaining its dominant position from the previous quarter, helping to cushion the impact from the US-China trade spat."