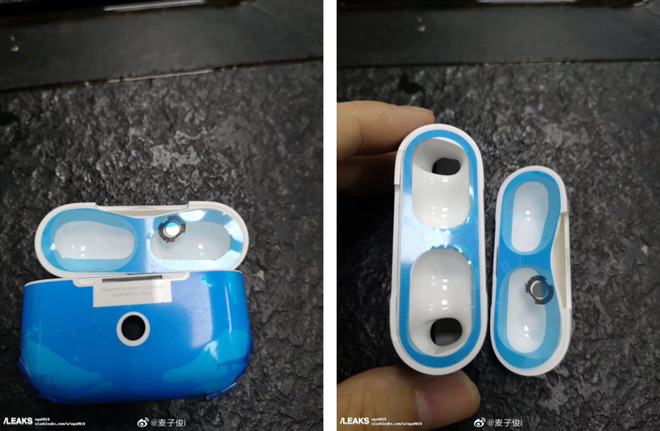 Published to leak depository SlashLeaks, the two images show what appears to be two halves of a squat, partially disassembled AirPods charging case.

The lower portion of the white plastic part includes a top plate with recesses presumably designed to accommodate a next-generation AirPods device. Holes leading down from the top cover into the larger housing are likely meant to hold earphone stems for charging and are similar in size and shape to openings found in current AirPods charging cases.

Apple's usual "Designed in California" and "Assembled in China" markings are displayed below what could be a hinge groove, while a large cutout below the text looks ready to receive a paring button affixed to the top portion of the shell by a piece of tape.

Both top and bottom sections are covered or partially covered in a protective blue covering. No other markings or internal components are visible, suggesting the part -- if legitimate -- originated at a plastic casing supplier.

According to reports out of Apple's supply chain earlier this month, the company plans to launch a new "AirPods Pro" product by the end of October. Unnamed sources said the earphones will incorporate noise cancelling technology, much like Apple's recently released Beats Solo Pro, and sell for at least $260.

Noted analyst Ming-Chi Kuo was first to deliver word of Apple's AirPods strategy in April, saying the tech giant intends to issue two new models, one at the end of 2019 and another in early 2020. At least one next-generation device is expected to sport a fresh design.

Apple itself might have leaked "AirPods Pro" in recent iOS 13.2 beta release that includes an icon depicting a heretofore unknown AirPods design. The illustration bears an uncanny resemblance to so-called "AirPods 3" images posted to SlashLeaks in September. Interestingly, the charging case in the September photos align with the shell seen in today's images.