AppleInsider
Posted: November 13, 2019 1:35PM
in General Discussion edited July 2020
In addition to launching a new family of 16-inch MacBook Pros, Apple said Wednesday it will narrowly meet a self-imposed deadline for the release of its new Mac Pro professional workstations by making them available for purchase sometime next month. 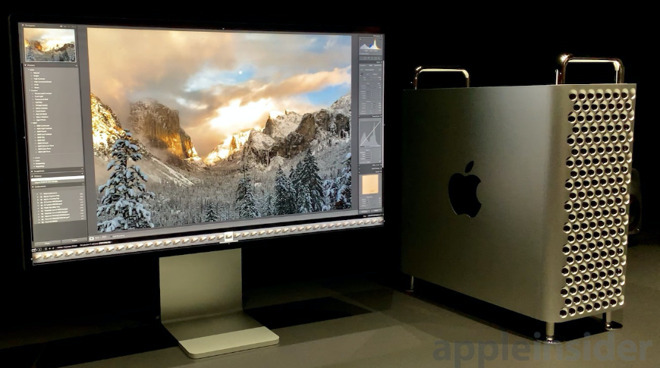 Apple has announced that the Mac Pro and the Pro Display XDR monitor will be released in December. The Mac Pro will start at $5,999 and the 32-inch Pro Display XDR will be available for $4,999 or $5,999 for a nano-etched version that gives better anti-glare, for $5,999.

While the Mac Pro is unlikely to sell in the same quantities as the iMac does, releasing it in December will allow Apple to ramp up production to meet the demand we've already learned is there from professionals in medicine, video and science for the purchasing cycle in the first quarter of 2020.

The December date was already expected, given the company's previous history of releasing Pro desktop hardware only just before its promised deadline. When Apple gave a sneak peek of the Mac Pro in June, it took a middle ground between being too specific and too broad. Where, for instance, both the previous 2013 Mac Pro and the 2017 iMac Pro had June sneak peeks, Apple gave them respectively a wide and a specific timescale.

"[The 2013 Mac Pro is] coming later this year," said Phil Schiller at its unveiling, before adding: "did say it was a sneak peak."

"It's going to be available in December," John Ternus, vice president of hardware engineering, told us straight as he revealed the iMac Pro in June 2017. In comparison, showing off the new Mac Pro, Pro Display XDR, and monitor stands in June 2019, Ternus just said that "they'll all be available in the Fall."

While Apple has not commented on this, supply chain sources in June this year claimed that the new Mac Pro would be manufactured in China.

In September, the company announced that it would instead be made in Texas. It's expected now that President Trump will tour the facility this month.

While it's possible that the China information was wrong, and it's certain that Apple planned the Texas move long before its announcement, it's most likely that the change was made after WWDC.

Away from physical production issues, there is also the fact that with the new 16-inch MacBook Pro, Apple is releasing two devices for professionals before the end of the year. It will not want to risk either product diluting the sales of the other.