AppleInsider
Posted: November 26, 2019 11:37PM
in General Discussion edited March 2020
A Macintosh System Tools floppy disk signed by late Apple co-founder Steve Jobs is up for auction, with the piece of tech memorabilia estimated to sell for at least $7,500 when the gavel drops in December. 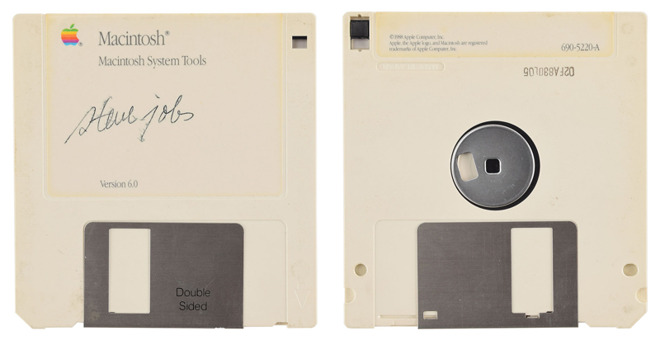 Up for bid at Boston's RR Auction, which has handled a number of Apple- and Jobs-related sales in the past, the Macintosh System Tools version 6.0 disk is signed by Steve Jobs in black felt tip pen. Listed in "fine" condition, the signature is a bit smudged, while the disk itself appears to be in generally good order with only a few blemishes and minimal signs of aging.

According to RR Auction's website, potential buyers must place a bid before 6 p.m. Eastern on Dec. 4 to be eligible for an extended bidding period. During extended bidding, each new bid resets a 30-minute timer that, once elapsed, closes the sale.

Jobs was notoriously cautious when it came to handing out his autograph. As such, only a few rare items remain, many of which have fetched thousands of dollars in past auctions.

Other Jobs-related items from past auctions include a newspaper clipping that sold for $27,000 and a signed first-issue of Macworld that fetched $47,775 in 2018. A job application that Jobs filled out by hand went for over $174,000 that same year.