AppleInsider
Posted: December 17, 2019 10:22PM
in iOS edited December 2019
Apple on Tuesday updated its new Apple Developer app to support Developer Program enrollment for coders based in mainland China, offering the feature as an app-based renewable subscription for the first time. 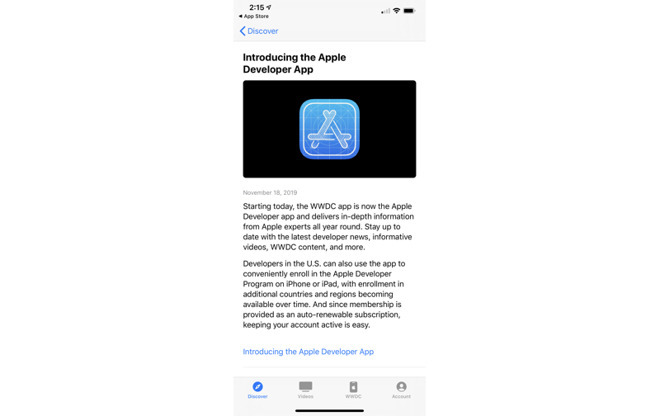 With in-app purchase support, app makers are able to start and finish their membership purchase with local payment methods on iOS devices like iPhone or iPad, negating the need to visit Apple's dedicated web portal. And like other versions of the Apple Developer app, enrollment in the Developer Program appears as an auto-renewable subscription, facilitating painless upkeep and account management.

Apple introduced the Apple Developer app in November as a reworking of its dedicated WWDC app. Along with options for Developer Program enrollment and account management, the title offers access to year-round news, informational videos and other assets deemed helpful to the app making process.

Previously, developer content was spread across the WWDC app, Apple's developer webpage and other online repositories. According to Apple, the redesigned app will serve its original role as a guide to the Worldwide Developers Conference when the gathering takes place in June.

Initially available to U.S. users, the option to enroll in Apple's Developer Program through Apple Developer will slowly roll out to additional locales. China is one of the first to net the feature.