AppleInsider
Posted: December 31, 2019 9:49PM
in General Discussion edited March 2020
Former Apple Music executive Jimmy Iovine says streaming services are all facing the same problems about differentiation, but notes it's a great time to be an artist. 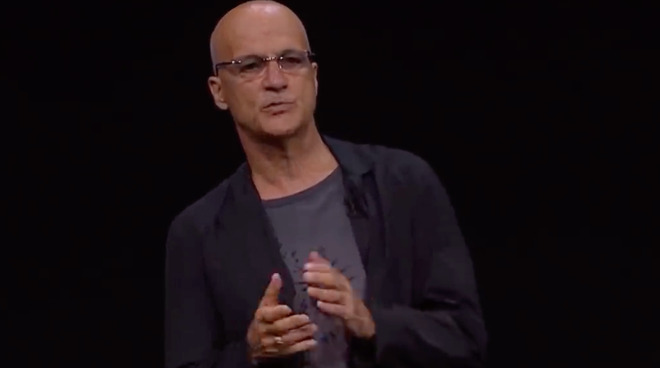 Around 14 months after leaving Apple, record producer and Apple Music co-creator Jimmy Iovine talked with The New York Times about the state of streaming music services. He says each faces the same difficulties and describes what he learned from Steve Jobs, Apple and Napster.

"It's all a response to Napster. I saw how powerful that technology was, and I realized we had to switch gears. The record companies were not going to exist without tech," he told NYT. "Why I got into the music business originally was to be associated with things that were cool. And I realized that the record business at that moment, the way it was responding to Napster, was not cool."

Iovine says that 20 years ago, the record industry was "putting up a moat" and suing people to protect its interests.

"So I said, 'Oh, I'm at the wrong party.' And I met a bunch of people in tech. I met Steve Jobs and Eddy Cue from Apple. And I said, 'Oh, this is where the party is. We need to incorporate this thinking into [my record company] Interscope.'"

Iovine also wanted to work on how his music was being listened to, and says that he learned a lot from how Dr Dre was concerned with "cheap, inefficient equipment." When he decided to form Beats music, he then learned from Apple just how complex hardware is.

"Steve Jobs used to sit with me at this Greek restaurant and draw out what I needed to do to make hardware," explains Iovine. "He'd say, 'Here's distribution, here's manufacturing,' and he'd be drawing on this paper with a Sharpie. And I'd go, 'Oh, [expletive].'"

Iovine says that his going from being a record producer to co-founding Beats, and then joining Apple, was not a case of jumping ship from music to technology. But also that while he sees technology and music as part of the same thing, others do not.

"The two sides don't speak the same language," he says. "Content doesn't know what technology is building. And engineers are just going by the way they see a problem. The streaming business has a problem on the horizon, and so does the music business. That doesn't mean they can't figure it out."

The problem for streaming, he says, is in the profit margins and how music services cannot really differentiate themselves.

"It doesn't scale," says Iovine. "At Netflix, the more subscribers you have, the less your costs are. In streaming music, the costs follow you. And the streaming music services are utilities -- they're all the same. Look at what's working in video. Disney has nothing but original stuff. Netflix has tons of original stuff. But the music streaming services are all the same, and that's a problem."

He also sees a problem in how record companies no longer have a direct relationship with music consumers. But equally, this can be tremendous for musicians and performers.

"The artists now have something they've never had before, which is a massive, direct communication with their audience -- from their house, their bed, their car, whatever," he says. "And because of that, everybody wants them. Spotify wants them, Apple Music wants them, Coke wants them, Pepsi wants them."