AppleInsider
Posted: January 7, 2020 12:52PM
in General Discussion edited September 2020
Intel has confirmed Thunderbolt 4 is on the way and will be supported by its processors in an upcoming generation, with the chip producer hinting at the connection's vast throughput capabilities at its annual CES presentation. 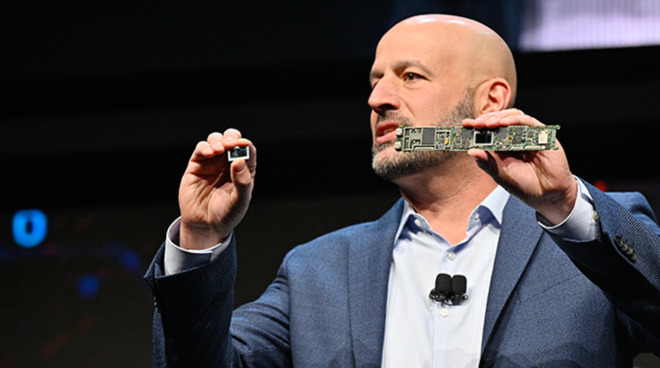 Part of a number of on-stage announcements at CES 2020, Intel made a rare comment about Thunderbolt 4, the anticipated follow-up to Thunderbolt 3. Intel Executive Vice President Gregory Bryant referred to Thunderbolt 4, making it possibly the first time the company has spoken about it in public.

Mentioned as part of its announcements for upcoming "Tiger Lake" mobile processors, Thunderbolt 4 is oddly described as having four times the throughput of "USB 3." As the base USB 3.0 has a maximum theoretical speed of 5Gb/s, this seems to be an unlikely claim to make, as Thunderbolt 2 is capable of achieving 20Gb/s, while Thunderbolt 3 is double at 40Gbps.

It is probable Intel is referring to the more recent update of USB 3.2 Gen 2x2, which is capable of up to 20 gigabits per second when using two lanes. If so, this would put Thunderbolt 4 as reaching a throughput of up to 80 Gb/s.

More concrete specifications about Thunderbolt 4 are expected to be made available ahead of the launch of the first "Tiger Lake" processors, which were said to be shipping sometime in 2020. Even so, it remains to be seen when Apple will introduce support for the connection in its products in the future, as it will most likely rely on Intel's processors to facilitate the feature.

It remains to be seen if Thunderbolt 4 will make it to market ahead of USB 4. Finalized in late 2019, USB 4 offers throughput of up to 40Gb/s, power delivery of up to 100W, and backwards compatibility with earlier USB standards, along with Thunderbolt 3 connections.