AppleInsider
Posted: January 29, 2020 10:31PM
in General Discussion edited October 2020
Apple is predicted to release its own branded wireless charging mat in the first half of 2020, according to noted analyst Ming-Chi Kuo, though the product may not be the AirPower stand-in users are hoping for. 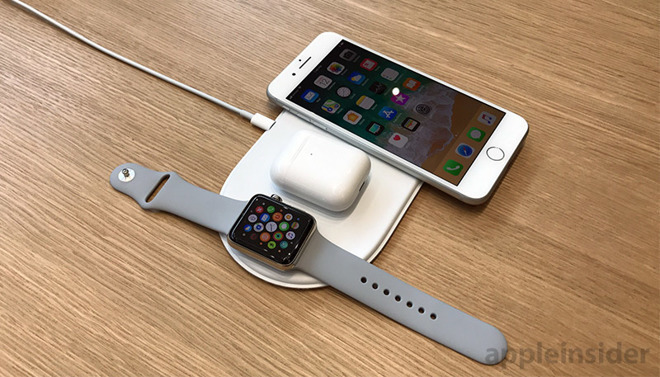 Hedged in a note detailing potential negative effects from the new coronavirus is mention of Apple's major product initiatives for the first six months of 2020.

The charging mat is of particular interest, as Apple attempted -- and failed -- to bring a similar device to market in AirPower.

Teased as a rare public "sneak peek" in 2017, AirPower was an ambitious project that promised free-placement wireless charging of Qi-compatible hardware like iPhone and AirPods, as well as support for proprietary inductive charging tech deployed in Apple Watch.

"After much effort, we've concluded AirPower will not achieve our high standards and we have cancelled the project," Apple SVP of Hardware Engineering Dan Riccio said at the time. "We apologize to those customers who were looking forward to this launch. We continue to believe that the future is wireless and are committed to push the wireless experience forward."

Kuo fails to detail the upcoming "small wireless charing mat," but considering the relatively recent and high-profile nature of Apple's failure to see AirPower through to fruition, it can be assumed that the upcoming device will not be a resurrection of the recently deceased product. While mere speculation, the device could be a high-quality inductive charger that does for iPhone what the Apple Watch Magnetic Charging Dock did for Apple Watch.

While Kuo has provided highly accurate Apple launch estimates in the past, the analyst's track record on contemporary accessory introductions has been less than perfect. A month before Apple killed AirPower last year, Kuo issued a note claiming the charger would debut within four months. More recently, he predicted Apple's Tile-like tracker would be unveiled alongside iPhone 11 in September.