AppleInsider
Posted: February 3, 2020 7:26PM
in General Discussion
TCL Communication says it will cease production of BlackBerry phones later this year when its rights to the name expire. It's the latest and perhaps lowest point in the incredible decline of the hit phone that was destroyed by the iPhone. 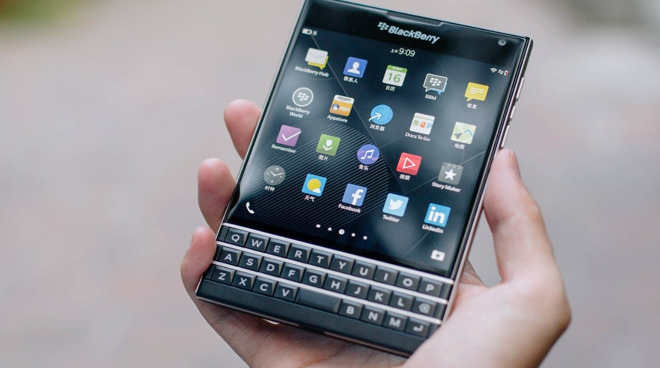 From August 31, 2020, TCL Communication will no longer sell BlackBerry-branded smartphones. It's because the company's rights to the name and technologies expire, so the name will revert to the original BlackBerry company, but it's not likely that new phones will appear again. The once-dominant phone has been eviscerated by the iPhone.

TCL announced the cessation in a statement that concluded how "the future is bright for both TCL Communication and BlackBerry Limited," but did not give any details.

The company has, though, said that it will continue to provide support for its BlackBerry phones until either August 31, 2022, or as long as local laws require.

There just may not be that many to support. Figures from 2017, the latest available, estimate that only 850,000 BlackBerry phones were shipped by TCL and other manufacturers that year. Apple sold 216 million iPhones in the same period.

It's not accurate to say that the BlackBerry range was the iPhone of its day, but it was the closest there was. From basic beginnings as a pager in 1999, the BlackBerry soon became a fully-fledged phone in 2000.

At that time, the company was called Research In Motion (RIM) and had a long history in wireless and point of sale equipment. The name "BlackBerry" was used because the small keys on the phone's keyboard resembled the drupelets of the eponymous fruit.

The phone became increasingly smart, with the ability to send and receive emails making it a beloved business tool. Users were so addicted to these phones that people began to refer to them Crackberry.

Just about the highest-profile business people in the world became fans, including President Obama.

During the early 2000s, RIM worked to get the same loyalty from consumers as well as business buyers. It produced the BlackBerry Pearl series, then the Curve and the Bold ones. A huge win for RIM with consumers came in 2005 when the company launched BlackBerry Messenger. BBM, as it was known became the WhatsApp of its day, and it solely worked on BlackBerry phones.

Success was so good for RIM that its BlackBerry phones were seen as the ones to beat -- and especially because of that keyboard. When Apple introduced the iPhone in 2007, one of the chief criticisms against it was that it lacked this keyboard.

Apple knew it would be an issue, too. So much so that Steve Jobs singled out the iPhone's lack of a keyboard as what actually made it better than the competition. 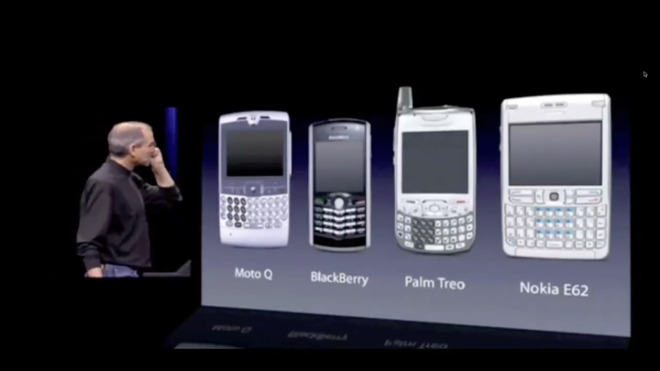 Steve Jobs in 2007, dissing the state of smartphones before unveiling the iPhone.

Second from the left on his slide is a then-current BlackBerry Pearl 8100 from 2006. Jobs next put the spotlight on the bottom half of all these phones, slicing off the screens to show just how much space the keyboards took up.

That was one reason Microsoft's CEO at the time, Steve Ballmer, ridiculed the iPhone.

"That is the most expensive phone in the world," he said, "and it doesn't appeal to business customers because it doesn't have a keyboard which makes it not a very good email machine."

RIM thought the same. Jacquie McNish and Sean Silcoff, authors of "Losing the Signal," about BlackBerry history, say that many in the company were confident Apple didn't matter.

"It wasn't a threat to RIM's core business," the book quotes RIM's Larry Conlee. "It wasn't secure. It had rapid battery drain and a lousy keyboard."

Given that the keyboard was seen as this killer feature for RIM, it was a sign of uncertainty in the company when they killed it. While RIM would keep coming back to that keyboard as its selling point, the company did release the BlackBerry Storm in 2008 without one.

It was a clear response to Apple, having a touchscreen-only display, and it sold well, but didn't convert Apple users and it didn't convert people who loved the BlackBerry keyboard.

In retrospect, Ballmer and RIM could not have been more wrong -- yet at the time, there was reason to think that BlackBerry's keyboard really would keep it on top.

In 2007, Apple sold around 1.4 million iPhones while RIM's sales were 6.4 million. Things were different the next year as iPhone rose to 11.6 million, but BlackBerry climbed too, to 13.8 million.

It's easy to forget that the iPhone didn't just destroy the competition, it grew the entire market, changed the very definition of a smartphone -- and then destroyed the competition. 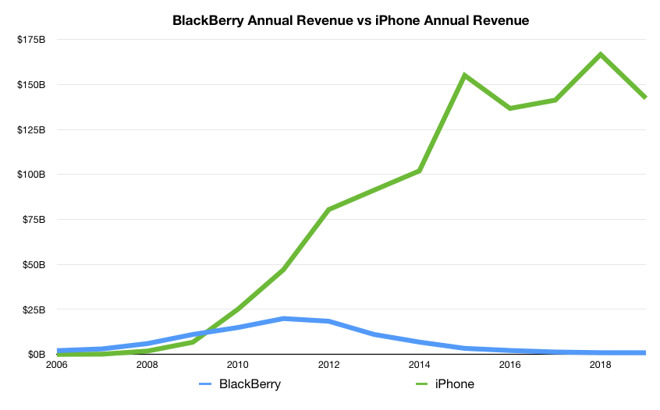 It was in 2010, three years after the iPhone's launch, that things clearly began to go wrong for BlackBerry, but even then, it was in a good position. Just not the best. RIM never beat Apple again, but in 2010 BlackBerry sold 36.7 million phones. In 2011 it was 52.3 million phones.

If you solely looked at RIM's sales figures, this would still seem like a great business and that 2011 figure was more than eight times as many phones as it had been back in 2007.

It was also only three-quarters of what the iPhone sold in 2011. In 2012, BlackBerry took a dip and sold 49 million, which was substantially less than half of the iPhone's 125 million. 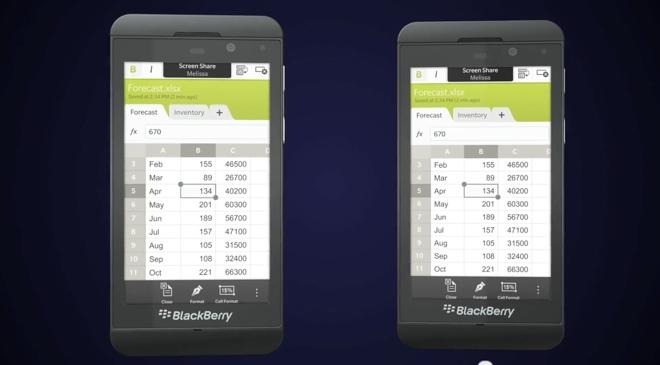 The BlackBerry 10 OS, as shown by RIM in mockups

By the time RIM was laying off employees in 2010, the iPhone was well into its stride and the iPad was released too. RIM launched a BlackBerry form of tablet called the Playbook that year.

Billboard advertising at the time tried to make it sound as if buyers who had bought an iPad were foolish. "They should've waited," said those ads. It was hard not to see "they" as referring to RIM, as the Playbook was visibly rushed to market with few worthwhile features and depending on users having a BlackBerry phone.

In 2011, RIM revamped its BlackBerry phones by producing a new operating system for them. The company did not manage the transition well, though, and alongside technical and legal delays, RIM made its first net loss since the launch of the iPhone.

A new CEO, Thorsten Heins, was brought in. He laid off people, revamped the company, and emerged as a bold and confident leader. In 2013, he renamed RIM to be called BlackBerry, and then even proclaimed the iPhone antiquated.

"History repeats itself again, I guess," he said. "The rate of innovation is so high in our industry that if you don't innovate at that speed you can be replaced pretty quickly. The user interface on the iPhone, with all due respect for what this invention was all about, is now five years old." 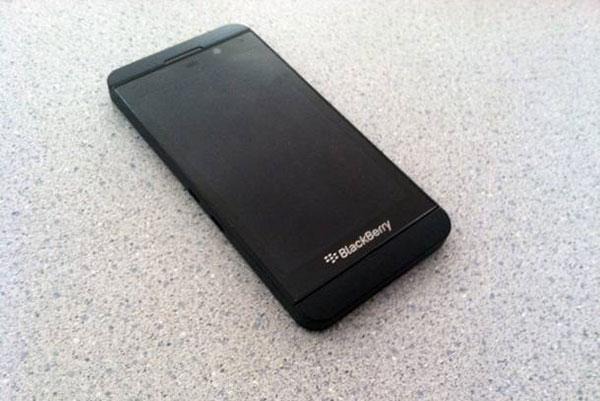 Heins said that in March 2013 and things were looking up for the company by then with its latest Z10 phone seemingly doing well. But by August that year, RIM was looking to be bought.

While more phones came out, more people were laid off, and by October 2013 the company even had to publish an open letter reassuring customers that BlackBerry would continue.

The newly-renamed BlackBerry company would explore every possible combination of being bought or partnering with other companies. In December 2016, TCL Communication announced that it would be "making new, modern BlackBerry smartphones."

It wasn't just a branding exercise. In its January 2020 announcement of the end of the deal, TCL underlined that their KEY Series phones had been a true partnership between the companies.

"What made these devices great wasn't just the hardware developed and manufactured by TCL Communication," it said, "but also the critical security and software features provided by BlackBerry Limited to ensure these were genuine BlackBerry devices."

TCL has been the largest manufacturer of BlackBerry devices since 2016, but it isn't the only one. Plus, the end of TCL's license could mean that the BlackBerry company is planning to once again go it alone with new phones.

Even if it does, though, there seems no possibility that it will ever again come close to the smartphone domination it once had.
«123»