AppleInsider
Posted: February 4, 2020 3:37PM
in General Discussion edited June 2020
The iCloud.com website now works natively on mobile browsers for both iOS and Android, giving users access to some of iCloud's most popular features to Android devices such as Find iPhone via a mobile-friendly interface. 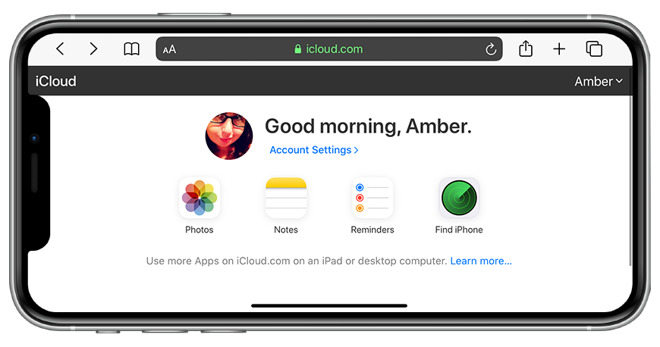 The feature launched without fanfare from Apple, but is certainly worth celebrating. Those accessing iCloud from their mobile browsers can now use Photos, Notes, Reminders, and Find iPhone via a browser without having to switch to "desktop site."

As a nascent feature, there may still be a few bugs to be worked out. It is likely that the bugs will be ironed out as Apple receives feedback from users. Apple may also roll out extended iCloud services, such as Contacts and Calendar in the future.

Newslanded mentions that Notes does have a few hangups on Android, and were not able to fully create new notes from the mobile Chrome browser. AppleInsider has found that in order to see Reminders on browser-based iCloud, you must make a reminder list on iOS or iPadOS first.

Other features, such as Find iPhone, are currently working as intended.

Users are also able to access account settings, which allows them to view how much iCloud storage they have left and offers external links for Apple ID, Language, and Formats.

The update is likely to be welcomed by users who occasionally need to use iCloud.com's device location functionality to relocate their iPhone, but only have access to Android devices nearby. By making it function via a mobile browser interface instead of requiring a desktop-based version, it makes the process of finding the misplaced devices far quicker and easier.